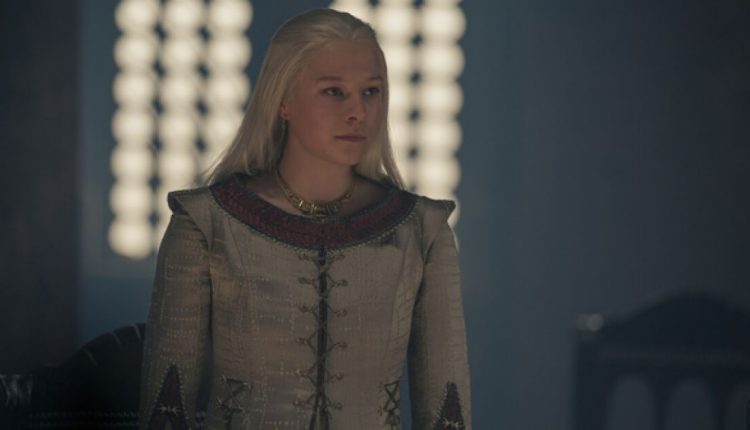 The following contains spoilers from Episode 6 of “House of the Dragon,” “The Princess and the Queen.”

Is it me, or is “House of the Dragon” moving way too fast?

On Sunday, Episode 6 of the “Game of Thrones” prequel leapt forward 10 years and brought in new actors to play many of its main characters. From one week to the next the prequel blew through a decade like Tyrion Lannister through vats of wine — with ferocity and abandon.

All of a sudden the show’s main obsession, Princess Rhaenyra Targaryen, is no longer a stroppy teenager, and she’s no longer portrayed by Milly Alcock. Now she’s a solemn mother of three played by Emma D’Arcy. Queen Alicent has also been swapped out like “Bewitched’s” Darrins. She’s now played by Olivia Cooke rather than Emily Carey.

It’s risky to introduce such a major change midseason, even for the skilled storytellers behind this fantasy franchise. “Game of Thrones” was renowned and respected for throwing curveballs and staging upsets that would have derailed other shows. But “The Princess and the Queen” did not convince me that scrambling dragon riders and courtiers this early in the game was a smart move. The change in faces and personalities Sunday night was too abrupt, even with the widespread knowledge that the drama would eventually bring in new performers as the characters aged.

For starters, the adult replacements may somewhat resemble the younger versions of their characters, but they no longer capture what made them compelling. Rhaenyra is recognizable by her flowing white locks and because castle folk call her “Princess,” but gone is the piercing gaze and rebellious spark that gave her such a wonderfully unpredictable persona.

Teen Rhaenyra had presence. She conducted herself like a noblewoman — ramrod straight posture, an unnerving poker face — but underneath the finery was a wily soul and the heart of a warrior. She vowed never to be paired with a mate of her father’s choosing or to be treated like a brood mare. Her sardonic side was apparent from the first time we met her sitting under the tree with her childhood friend Alicent. She made fun of the history lessons that ladies like her were meant to memorize, revere and replicate.

Adult Rhaenyra feels like a dulled version of her earlier self, though it’s too early to tell if the lower wattage is due to the choice of actor or the princess’ circumstances. She’s in labor when we meet her, giving birth to her third son. We don’t learn much more about her other than that she still has a thing for knights in shining armor. Her brunette offspring resemble the royal’s dark-haired protector, Ser Harwin Strong (Ryan Corr), more than her silver-topped husband, Ser Laenor Velaryon (his teen version, played by Theo Nate, has also been supplanted, by John MacMillan).

The new Alicent is also quite different from her former self, but we know it’s her thanks to the green gown and her “service” to the king. The former sweet and forgiving queen is now understandably jaded and bitter after a decade of watching Rhaenyra sleep with the men of her choosing. Poor Alicent is still tied to the kind but decaying King Viserys Targaryen (Paddy Considine). The old regent is losing limbs, digits and hair by the hour. But it’s the sovereign’s weakness as a ruler that disgusts the queen. Adult Alicent is cold and wooden, a far cry from her warm teenage self. She’s so different that she may as well be another woman.

Personnel changes in popular series aren’t new. There’s Becky of “Roseanne,” for instance, and Don Draper’s son in “Mad Men” was swapped out more times than anyone bothered to count. But those were of one character in an ensemble. Here, only midway through the first season, we’re introduced to an almost entirely new set of main players in a series where character development is key to the story’s success.

Before Sunday’s episode, the “House of the Dragon” successfully convinced us to travel back to Westeros 200 years before the time of Cersei and Littlefinger, immersing viewers in a vast new cast of characters. This leap forward is not just abrupt, it’s distracting. Fortunes changed rapidly in Episode 6 but it was hard to keep track while grappling with the awkward changing of the guard. Laena Valeryon was supplanted by an adult performer, Nanna Blondell, but there was scarcely any time to reengage with the character before she took her own life by dragon fire. Gods help the realm now that her husband, the impetuous Prince Daemon (Matt Smith), is now a single father.

Like Viserys, Daemon and Ser Criston Cole (Fabien Frankel) are played by the same performers, and though much has shifted in their lives, it’s not a chore to connect their past with the present. So it’s unclear why the princess and the queen had to be replaced so early in the series, and why “House of the Dragon” is speeding through time so rapidly. Alcock and Carey are talented enough to have played older characters, and helped viewers adjust to the considerable time leap in the process. “Game of Thrones” stuck with the same main players for eight seasons — through childhood, teens and twenties — and it wasn’t a hard sell.

With four episodes left in the season, it’s too early to tell for certain if “House of the Dragon” made a fatal error by accelerating so soon. But “The Princess and the Queen” isn’t a promising start if the goal is to maintain the show’s momentum and the audience’s investment in key characters.