Who is Agatha Harkness in ‘WandaVision’ Episode 7? Here’s the backstory 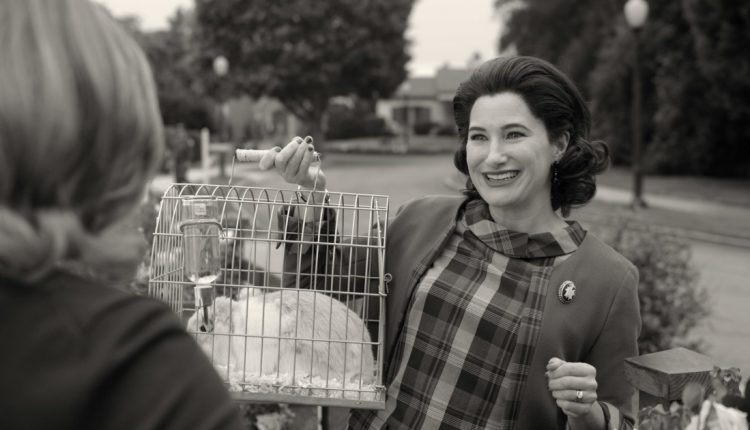 This story contains spoilers for the seventh episode of “WandaVision.”

“WandaVision” has finally revealed the truth about Agnes: She’s been Agatha all along.

The seventh episode of the Disney+ series, titled “Breaking the Fourth Wall,” sees both Wanda and Vision learning a little bit more of the truth about their lives in Westview.

Vision, now back inside the reality within the Hex, officially meets Darcy Lewis, who fills him in on his life and deaths before the synthezoid moved to the New Jersey suburb to start anew with his wife.

Wanda has an even more eventful day than her hubby. Her reality-controlling powers seem to be on the fritz, she has a run-in with a newly super-powered Monica Rambeau and she learns that her chatty neighbor Agnes, played by Kathryn Hahn, has been keeping a pretty major secret.

It turns out Agnes is Agatha Harkness, and she’s been magically pulling strings in the town since the very beginning, unbeknownst to Wanda.

Fans have long speculated that there was more to Wanda’s enthusiastic, meddlesome neighbor, coming up with theories about her true identity informed by the fact that Agnes is a portmanteau for Agatha Harkness. They’ve also tracked Easter eggs since the show’s premiere, including everything from her witch costume in the Halloween episode to the name of her rabbit, Señor Scratchy (in the comics, Agatha has a son named Nicholas Scratch).

Though Agatha’s reveal in “WandaVision” appears to set her up as the show’s villain, in the comic books she’s a character who has generally had a more friendly, if complicated, relationship with the Scarlet Witch.

Agatha’s comic book origins date back to the late 1960s, when she was first introduced in the “Fantastic Four” series. Depicted as an older woman, Agatha originally worked as the governess for Franklin Richards, the son of Reed Richards (Mr. Fantastic) and Sue Storm (the Invisible Woman). The Fantastic Four are a superhero team whose screen rights, along with the X-Men’s, were tied up at a different company until Disney’s acquisition of Fox. Marvel Studios has already announced it is working on a “Fantastic Four” film set within the Marvel Cinematic Universe.

A powerful witch, Agatha is eventually called upon to help Wanda with her magic and becomes her mentor. Over the years she has been killed a number of times, but that hasn’t stopped her from showing up to help or to deliver hard truths, whether as a spirit or after finding her way back to life.

The elder witch has been a particularly significant presence in story lines that involve Wanda and Vision’s children, Billy and Tommy.

During the 12-issue “The Vision and the Scarlet Witch” series (1985-1986), Agatha’s spirit gives Wanda the idea to use the magical powers she is channeling to become pregnant. And a few years after the kids are born, a newly resurrected Agatha confronts Wanda about how her children are not quite real.

In the culmination of the “Vision Quest” arc of “The West Coast Avengers” (1989), it is revealed that the magical powers used to create Thomas and William made them the lost pieces of Mephisto’s soul. (Mephisto is basically the devil of Marvel comics.) The children are kidnapped by Mephisto’s proxy, Master Pandemonium, and are absorbed into his arms.

Agatha wipes memories of ever having twins from the devastated Wanda’s mind, and it’s Agatha that Wanda goes to when she starts to question why people think she had children she can’t remember. (One thing Agatha did not do in the comics is kill Sparky, the family dog, but she does play a key part in the 2015 “Vision” comic book series where the pup is introduced.)

The Agatha of “WandaVision” appears much more villainous than her comic book counterpart, but many questions remain. Agatha-as-Agnes has repeatedly mentioned her husband, Ralph. Could he be another villain? What is Agatha’s plan? What’s up with that ominous book? And, most importantly, where did Billy and Tommy go?

With only two episodes remaining, “WandaVision” still has plenty to unpack.