What are vaccine passports? Trevor Noah breaks it down 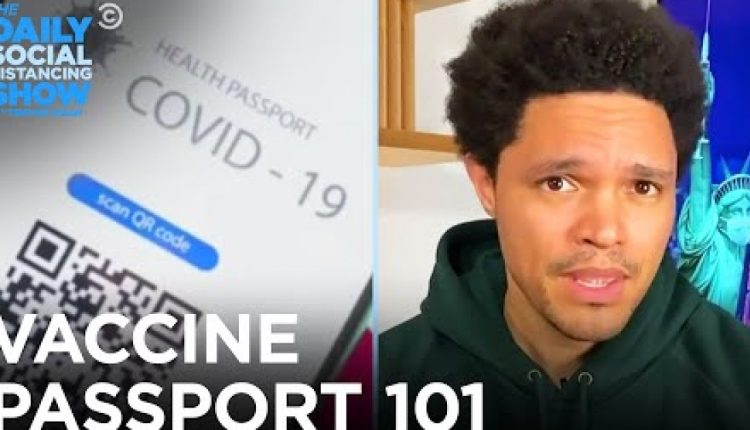 Trevor Noah has a simple solution for Fox News pundits complaining about vaccine passports: “If you don’t want one, don’t get one.”

On Tuesday’s episode of “The Daily Show,” the late-night host voiced his support for the implementation of vaccine passports — a form of documentation that would theoretically verify one’s COVID-19 vaccination status and grant entry into certain events and establishments.

But — as seen in various clips on “The Daily Show” — the not-so-novel idea of presenting one’s vaccination records in the interest of public safety has sparked outrage among Fox News hosts and their guests, who have recently “started standing up for the undocumented,” as Noah put it.

“First of all, this is not ‘the end of human liberty in the West,’” Noah said, quoting one vaccine passport skeptic verbatim. “That happened in 2001, when they shut down [free music site] Napster. … I also wonder if anyone has ever said the phrase, ‘I’m not overstating this’ and then not completely overstated something. …

“They can say that this is Nazi Germany, but nobody’s forcing you to get a vaccine passport. … You’ll just have to pay a coyote to sneak into Dunkin’ Donuts. Honestly, I really want to know what Fox News is going to do when there’s an actual existential crisis — like, a real one, because everything for Fox News is a crisis.”

The comedian balanced out the Fox News commentary with remarks from health experts and journalists who underscored the fact that vaccination documents have long been required for various purposes, such as enrolling children in school and traveling internationally.

“Welcome to the world of vaccine passports, which I think are a great and simple way to show that you’re immune from corona,” Noah said. “I mean, I’ve just been going around yelling, ‘I’ve been shot!’ And you’d think people would relax knowing that I’ve been vaccinated, but they always seem to freak out …

“Not to mention, this can help give businesses peace of mind. American businesses want to know that the customers legally carrying assault rifles into their store aren’t going to sneeze on anyone. Safe!”

Toward the end of the segment, however, Noah did express “some legitimate concerns” about the concept of vaccine passports — namely regarding how they would be produced and distributed. For example, a virtual vaccine passport displayed on a smartphone might not be an accessible option for everyone, Noah said.

“Vaccine passports can’t just be an app, but paper vaccine passports could have all kinds of issues too,” Noah said. “They can be forged. They can get lost. … Which is why we need to think outside the box.

DMX to be tested for brain function; on life support in coma

Kehlani Addresses Video Coming Out as a Lesbian

What's on TV Monday: 'Black Lightning' on The CW and more