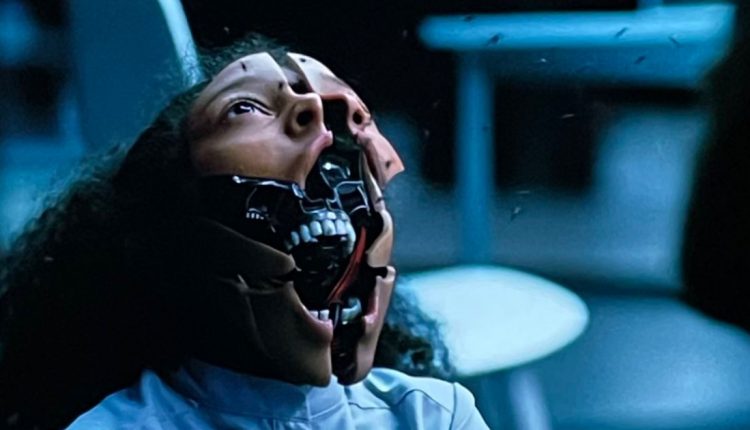 “Reality” never is what it seems to be in Westworld. But in season four of HBO’s trippy sci-fi dystopian series, where — and more importantly when — the characters are, turned into a major headscratcher. Until the most recent episodes that is. Suddenly, it became all too clear what Charlotte/the host copy of Dolores living as Charlotte (Tessa Thompson) had in mind all along with her treasured Host City, that ultramodern Manhattan outpost for synthetic fleshers and the growing number of renegades that wanted to escape her madness.

Last week’s episode, “Metanoia,” written by Desa Larkin-Boutté and Denise Thé, further tilted the show on its creative axis when it let its pistol-shooting Man in Black copy (Ed Harris) loose, paving the way for what appears to be one wild survival-to-the-fittest for ALLkind in Sunday’s season finale and—dare we say?—a very different future for Westworld should there be a fifth season.

For Jay Worth (Fringe, Person of Interest), the show’s VFX supervisor and the 2017 Emmy Award winner for Outstanding Special Visual Effects for “The Bicameral Mind” episode, season four proved to be one of the most challenging outings of them all in terms of bringing an effective level of believability to the world’s experience within any given episode.

“One of the biggest challenges for our team this year was creating an entirely new world that was Manhattan, then figuring out how Host City ties into all of that—what it looks like how that feels,” Worth said. To that end, Worth and VFX team often take what already exists in the real world—a person’s face, objects, various locales like a city or landscape—and use it as a canvas to digitally paint an entirely new picture. Host city, a person’s face opening four different ways, and such.

“Another great challenge was creating the ‘game’ that Christina [old Delores, played by Evan Rachel Wood] is working on—the visuals,” Worth added. “And the actual host tower visuals. Tying all those different pieces together was the biggest challenge for us.”

Creating New Worlds From Old Ones

From the get-go, the HBO drama starring Evan Rachel Wood, Thandiwe Newton, Ed Harris, Jeffrey Wright, Tessa Thompson, James Marsden, Luke Hemsworth—and more recently Aaron Paul and a slew of other actors—turned heads. It breathed new life into Michael Crichton’s 1973 film and managed to nab nine Emmys, including one for Outstanding Supporting Actress Thandiwe (then Thandie) Newton as fan favorite Maeve. This season seemed to tame zealous fans who panned season three. All the while, Worth’s work behind the scenes has been heralded for its intricate attention to detail with its clan of synthetic flesh hosts and how well he grounds sci-fi in reality.

“One of the fun things about Westworld is that [creators/showrunners] Jonah Nolan and Lisa Joy never sit back and rehash something,” Worth said. “I’m always amazed, even when we did broadcast television with Person of Interest, that we would suddenly be blowing up the entire set. And it’s like, ‘I thought we were doing a procedural.’ And they’d be, ‘No, no—that’s not what we do.’ We’re always coming up with new worlds, new areas, new ideas, and new places to take the story. And new kinds of worlds to build.”

Another great obstacle for Worth this season, perhaps more than any of the other seasons, was that the series became somewhat of a traveling roadshow, featuring a variety of different locales and timelines. Worth and the team retooled the Sweetwater set from earlier seasons, transforming it into a 1920s Chicago theme park called Temperance— basically, Charlotte revamped Delos’ shtick by creating a “Westworld” setting in 1920s Chicago. There’s also Host City itself—think: Manhattan with slick VFX touches.

“It was all about making all these places feel cohesive and impactful, and as if they all go together,” Worth said. “And hours and hours of conversations go into in each of these things so by the time you get to something like season four, you know what something, or someone, or a robot body looks like. You know what it should look like when someone’s in the Sublime.”

Every inch of every frame of Westworld is designed. Technically, there are not that many locales the team can shoot, except, Worth notes, when they’re out on The Plains. “And even then, we have to remove airplanes and contrails to give it a sense of uniqueness and otherness. I just haven’t seen very many things like this series out there.”

“And people might not notice all the ‘weird’ things we do,” he continued, “but the fact that we clean out almost every single streetlight and traffic signal in every part of the show is unique. There’s something about it when you watch it. You might not be able to put your finger on it, but it just feels different.”

Related: Exclusive: Owen Wilson on his Role in Secret Headquarters and Playing a Memorable Superhero

The End Is Near?

Worth remains tight-lipped about the upcoming season finale. Although, with how things played out in the season’s penultimate episode—Maeve and Charlotte being gunned down by the faux Man in the Black—it’s safe to say we’re in for a memorable ride.

“It’s been a dream to not do the same thing this season, and I think that comes across well in the episodes,” Worth said. “The fun is that everything builds on itself. This season, we’ve added a bed of richness in terms of visuals and storytelling. To be able to create a throwback to Sweetwater with Temperance was incredible.”

To be sure, the entire VFX crew has grown at this point. “It’s a lot bigger than it used to be back in the day,” Worth admitted. An on-set supervising team and data wrangling team keep things in check, and the on-set team “practically lives with the crew,” doing everything from prep to shooting at different locations. Worth also credited an “amazing” VFX producer, Liz Castro, and multiple VFX, editors. The show also partners with artists and vendors around the world.

“One unique thing about this season was being able to add Mark Stetson [of The Fifth Element, The Lord of the Rings] to the team, which was invaluable,” Worth added. “He offered his years of expertise. He has such an eye for things. That’s the only reason we’re able to get to do this—because of the people who really put in all the hard work to bring the show to life. And it’s been a joy to be a part of.”

Jungkook’s vampire pic gets a shout-out from Twilight team; ARMY wonders if Jungkook Cullen is coming