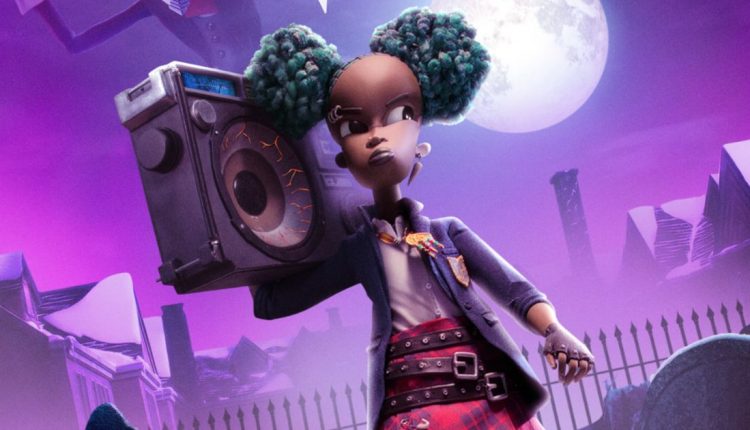 As Wendell & Wild director Henry Selick will tell you, stop-motion is the oldest type of animation. In addition to Selick, some other acclaimed filmmakers have used this classic type of technology over the years — Wes Anderson, Charlie Kaufman, Tim Burton. And now Jordan Peele has produced a new stop-motion film of his own, with Lyric Ross (This Is Us) voicing the main character.

Netflix’s new animated tale follows scheming demon brothers Wendell (Keegan-Michael Key) and Wild (Peele), who enlist the aid of Kat Elliot (Ross) — a tough teen with a load of guilt — to summon them to the Land of the Living. But what Kat demands in return leads to a brilliantly bizarre and comedic adventure like no other, an animated fantasy that defies the law of life and death, all told through the handmade artistry of stop-motion.

The true protagonist of this epic journey is 13-year-old Kat, a green-haired outsider with a tragic past who has come to Rust Bank Catholic School for Girls to disturb the peace, blasting punk rock through her dad’s prized boombox. We recently caught up with Ross to learn more about her character and what it was like working on an animated film.

Preparing For The Lead Role

MW: Congratulations on your new movie! Tell us about your character.

Lyric Ross: Yeah, Kat… she’s a bada**, you know? She’s been through some things in the past, one of those being her living through her parents having a tragic death. And she lives life after, you know, pretty much blaming herself for it. And somehow, these two demons come into her lives, pretty much referencing her own personal demons. And she goes on this quest, pretty much fighting for her parents and along the way, you know, just battling these demons.

MW: Did you draw on any personal experiences in preparation for the role?

Lyric Ross: I don’t think so. Actually, I took from some people who are close to me, friends and family. I know a lot of people who have been through some things and just, you know, how they seem to have just climbed out of those holes and how strong they ended up being even through those times because I’ve seen them go through these situations. And I’ve been there with them along the way. So just taking from those experiences from other people and how I see it through my eyes.

MW: Was it easier, or maybe more even more difficult, playing a character in an animated movie versus live-action?

Lyric Ross: Oh, it was so difficult. It was really hard for me. You know, this is my first animation anything [movie, TV show, etc.]. I had no idea what to do, no idea what I was doing. So I was very, very scared in the beginning. But Henry [Selick] was very patient with me and super sweet. He helped me a lot along the way, so much to the point where I got to just put in a little bit of my own ideas in the box, in the bowl. But in the beginning, I was just like, “OK, just follow the directions and stay quiet and just, you know, do what they tell you to do.” But he seemed to give me a lot of freedom in that area, which was very dope to experience.

MW: What was it like working with Key and Peele?

MW: If you had to pick one, what would you say was your favorite scene to do, to voice your character for?

Lyric Ross: Oh, man. That’s a good one. I remember — and I only say this because I just love hearing Henry’s laugh because that’s how you know you did good, you did something right there — but I remember the first time I did it was in the intro, actually. I said something like, “The town used to call it ‘Crust Bank!'” And that was the first time I heard Henry do that hearty laugh. And I was like, “I have to search for that laugh, I have to work for that.” But yeah, that was a fun part to do.

MW: This movie sets up a really cool universe, with the underworld and all those crazy characters. Do you think it’s possible for another Wendell & Wild movie to come out, whether it’s a sequel or a spinoff?

MW: Would you like to share about other projects that you’re currently working on that will be released in the future?

Why These Christmas Movies Never Get Old