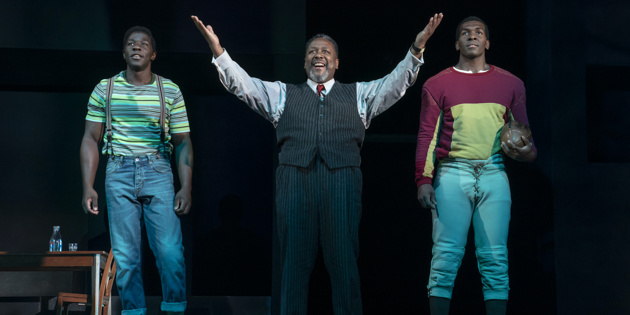 Wendell Pierce is ready to climb. The veteran actor of the stage and screen is currently giving a lifetime performance as Wily Loman in Arthur Miller’s Death of a Salesman, becoming the first Black actor to take on the titanic character. Eight times a week, Pierce leads the cast at the Hudson Theatre through the emotional story of the Loman family, feeling as if he’s taking on Mount Everest every night. He recently sat down with Broadway.com Editor-in-Chief Paul Wontorek for a recent episode of The Broadway Show with Tamsen Fadal to talk about joining the fraternity of men who have played the part, the accomplishment of navigating the play’s text and more.

It’s been over two years since Pierce first bowed as Willy Loman alongside current star Sharon D Clarke when the Miranda Cromwell-directed production played London’s West End in 2019. He earned an Olivier nomination for his performance and is feeling the same excitement and satisfaction playing to Broadway audiences. “I’m having the time of my life. It’s a great challenge,” he said. “It’s a sense of satisfaction and accomplishment at the end of the evening. Every night I feel as though I’m at the base camp of Mount Everest looking up, and at the end of the evening, I have the summit and it challenges me, every part of my being. It is the thing that makes me really appreciative of all the work that I’ve done in preparation for it.”

This production of Death of Salesman marks the fifth Broadway revival of Miller’s play and the first to center the narrative on a Black family; for Pierce, the inclusion of that experience is pertinent to the production’s success. “It is absolutely instrumental to the impact that it’s having on people,” Pierce said. “It is so impactful because it enlightens the material and amplifies the themes even more. What was the usual humiliation? The usual self-destruction? The usual variables that are placed in front of Willy’s pursuit of this American dream become even more insurmountable because of the the micro and macro aggressions that were happening and the racial culture of this country for a Black family in 1949. The illumination of all the pain and conflict of the play is heightened with a Black family. The reason you do revivals is to bring a new interpretation. The African American experience, along with a vital and visceral Willy who fights to the end before he ever gives up, are the two things I’m proudest of in our interpretation.”

Before bowing on stage, Pierce made his name known playing Detective Bunk Moreland on The Wire. Although the series never earned any major awards during its run, it is often named as one of the greatest television series of all time. “I wish for every actor that they would have something that’s so defining of their work in the arc of their career,” Pierce said. “I think Death of a Salesman is going be that for me now. I’ve become a part of a small fraternity of men who played the role, I think about them every night. I think of the five men who played it on Broadway. I feel connected to Lee J. Cobb, Dustin Hoffman, Philip Seymour Hoffman, Brian Dennehy and George C. Scott. I feel personally connected to them because I know what that feeling is like before the curtain rises. I know how daunting the evening seems and how fulfilling and satisfying it will be in a couple of hours.”

Watch the full interview below, and head here to check your local listings for The Broadway Show. Hosted by Fadal, it is the only nationally syndicated weekly theater news program.