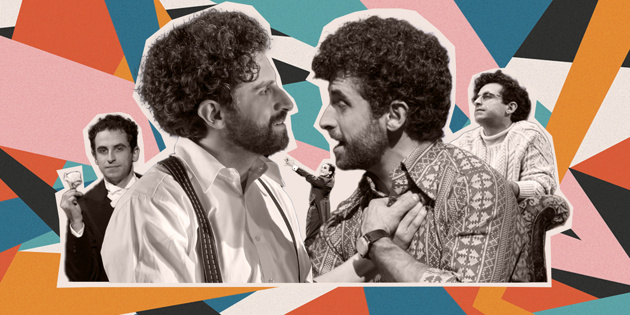 Brandon Uranowtiz is a three-time Tony nominee known for his work in both musicals and plays. He was nominated for his featured performances in An American in Paris, Falsettos and Burn This and appeared on Broadway in Baby It’s You!, Prince of Broadway and The Band’s Visit. He is now giving a standout performance in Tom Stoppard’s Leopoldstadt, which tells the story one extended Jewish family from 1899 to deep into the heart of the 20th century. Here, the performer joins Broadway.com Editor-in-Chief Paul Wontorek to visit all of his former Broadway theaters and talk about his career.

On making his Broadway debut in Baby It’s You! at the Broadhurst Theatre: “I met my partner of almost 12 years on that show. My beautiful, wonderful, amazing partner Zach was my standby, which sounds crazy and weirdly narcissistic, but we’re very different. The thing that happens when you’re in something that is not a hit and is not particularly received well is you sort of, to a degree, end up trauma bonding together. It ended up actually being a really wonderful experience in many ways.”

On working with Hal Prince on Prince of Broadway at the Samuel J. Friedman Theatre: “It was a bucket list thing that was not even on my list of dreams.  It was like so far out of reach for me that I would work with someone like that and then to work with [Hal Prince] and have him be such a kind, generous soul was beyond anything I could have ever possibly imagined in my career.

On playing Mendel in Falsettos at the Walter Kerr Theatre: “I discovered Falsettos when I was a young boy and was like, ‘Wait, there’s a musical where a kid has a bar mitzvah?’  It was the first time I really felt like there was something about me in the musical theater canon. Obviously, later when I came out, it blossomed into a whole new meaning for me. To be part of this from the beginning, I felt like we created lightning in a bottle. The chemistry between all of us was palpable in the room.”

On playing Larry in Burn This at the Hudson Theatre: “It was the first time I got to play a gay character on Broadway. It was very interesting and I felt a big responsibility to the community and to gay people everywhere to represent to be out and to be open and proud and it was a big moment for me. [Getting a Tony nomination] was icing on the cake.”

On playing Nathan and Ludwig in Leopoldstadt at the Longacre Theatre: “This is like when I dreamed of being an actor as a kid. This sort of encompasses all of it. And to now be doing it as the the line between the theater and the real world blurs I feel an even bigger obligation to be telling this story. As an actor, I feel like there’s no there’s no other thing that I should be or could be doing right now.”

Watch the video below, and head here to check your local listings for The Broadway Show. Hosted by Emmy winner Tamsen Fadal, it is the only nationally syndicated weekly theater news program