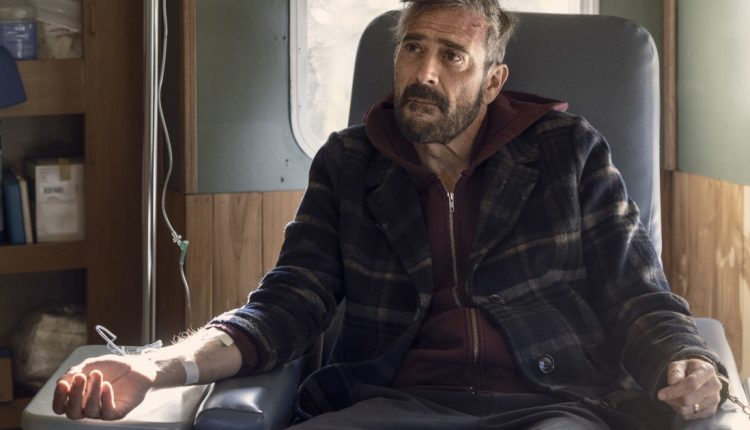 The following contains spoilers from tonight’s episode of “The Walking Dead,” “Here’s Negan.”

AMC’s “The Walking Dead” has been a treacherous climb up a gory pyramid: The zombie-apocalypse version of Maslow’s Hierarchy of Needs. First, the survivors addressed physiological imperatives such as hunger, then security, then cemented the bonds of belongingness. As its penultimate season concludes with “Here’s Negan” on Sunday, delivering the origin story of the series’ bogeyman played by Jeffrey Dean Morgan, showrunner Angela Kang is pondering how such a person might fit at the top of that pyramid — self-actualization or in “The Walking Dead’s” case, a sustainable, just civilization.

“Negan is trying to find his place in society in general, and that goes through multiple stages,” she says. “‘Am I going to have my past hanging around me forever? Do I deserve that? Can I integrate with these people? Do I want to? What is the right way to put the world together?’

“He had been the leader of this giant community and had his own set of rules and in certain ways, they worked well. You could say a lot of people were oppressed under that system. But if you’re a person who mostly judges by safety and security, he did keep a lot of people safe for a long time.”

Tonight’s episode depicts the pre-Apocalypse Negan — who would become a bat-wielding pseudo-cult leader — as a mostly benign screw-up who lost his job as a high-school gym teacher after a bar fight over his beloved wife, Lucille (played by Morgan’s real-life wife, Hilarie Burton-Morgan). Even this version of Negan is no angel, though; despite his love for Lucille, he cheats on her.

His desperate attempts to keep his cancer-stricken wife alive as the world falls apart form the foundation from which “Savior” Negan would rise. Unmoored from the life he shared with Lucille, he finds he’s “capable of damn near anything”; he joins the multitude of “Walking Dead” characters transformed by trauma.

“Negan is one of the biggest bad guys we’ve had on the show. He killed beloved characters; he’s brutal. But you know, from his point of view, every villain is a hero in their own story,” says Kang. “That’s not to excuse decisions he’s made, bad things he’s done. But with any villain, if you’re able to explore what’s behind the decisions they make, there are points where you can empathize [with] or understand their thinking.

“That’s how we’ve been approaching Negan for the last arc because he has a lot of room to grow as a character. When you start from a really bad place, you can only move up.”

The episode may have shown the birth and death of a monster: In the end, Negan appears to let go of both his horrific incarnation as leader of “The Saviors” and his dead wife in the symbolic burning of the weapon he named in her “honor” — his infamous barbed wire-wrapped baseball bat.

“Jeffrey’s a great collaborator. He likes playing that redemption arc, but also he does enjoy being badass Negan. He and I are very aligned in that. We wrote the thing and we’re like, ‘We think you’re gonna like this’ and he got really excited — especially when we were like, ‘Do you think Hilarie would be interested in playing this role?’ … For him, the big thing was saying goodbye to the bat, Lucille. He wanted to say more of an earnest goodbye to his wife.I mean, we definitely had it as loving, but he added a couple of things that brought the scene to the next level.”

The comic’s final story arc directly addresses what makes a sustainable society. What would you keep, if you made the rules? What would you lose? And how would you navigate the nagging problem of what others want? Such conflicting interests are part of the dilemma Negan represents: Can such a criminal be redeemed? What about the ongoing trauma his very existence inflicts on his victims’ loved ones? Where does justice become just vengeance?

“The last thing Maggie tried to do [before the character left for the better part of two seasons] was go in and kill Negan, like, full vigilante justice. And we know that she does not mind some vigilante justice,” says Kang. “This man who terrorized our heroes, killed Maggie’s husband, Glenn — the situation is flipped where she’s very formidable. She’s scary. Negan knows that everybody loves Maggie and they’re going to rally around her before him. That puts him in an untenable situation. So that’s one of the dynamics that we’re playing into the season going forward.”

The current run of six episodes, intended to bridge Seasons 10 and 11, raised more questions than they answered. The first entry reintegrated fan favorite Maggie Rhee (Lauren Cohan) while introducing some of her new friends (including metal-masked martial artist Elijah, played by Okea Eme-Akwari) and new antagonists, The Reapers. For the remaining installments, though, it was as if The Reapers didn’t exist. (Kang promises that the Reapers arc is “not entirely over. There will be more.”)

Another subject about which Kang is tight-lipped? Daryl’s love life. In the episode “Find Me,” series mainstay Daryl (Norman Reedus) finally has a romantic relationship — in flashback, leading to a mixed response from fans who’d long been “shipping” him with the other longest-surviving character, Carol (Melissa McBride), or the tough, smart Connie (Lauren Ridloff). But Kang won’t comment on Daryl’s dalliance with Leah (Lynn Collins) or the prospects of a love triangle with the resurfaced Connie.

After six pandemic-affected episodes that were “smaller by design,” Kang offers assurance that the series’ concluding mega-season, consisting of 24 episodes over two years and bowing Aug. 22 with an eight-episode run, will open with “a big bang.” “We’re back to our big scope and scale. We’re gonna see some storylines and action and locations that we’ve never done before and there’s going to be a return [of] some characters and a lot of really cool Maggie-Negan stuff, as well as some super-cool Daryl being awesome and tricky and engaging with the group in a way he hasn’t before.”

Evanescence’s Amy Lee on owning her voice and Taylor Swift