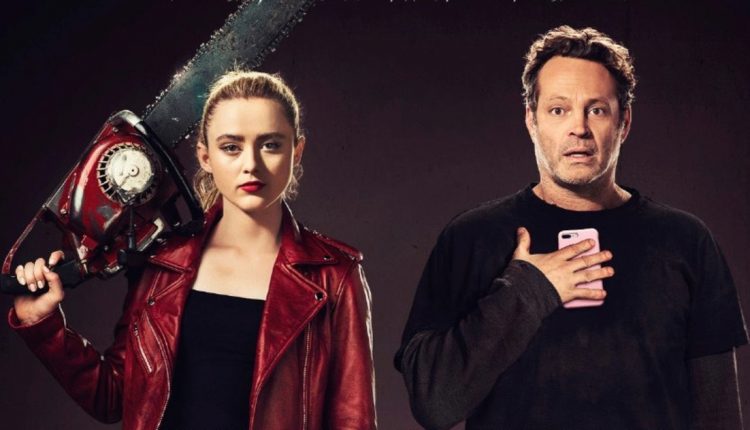 Freaky is a teen slasher comedy that blends multiple classic genre storylines. It takes the body switching premise of Freaky Friday, then combines it with the bloody carnage of Prom Night and Scream. It pokes fun at generic horror tropes and stereotypical characters with a cleverer than expected script. Vince Vaughn is hilarious as a teenage girl in a serial killer’s body. One scene in particular had me laughing almost to tears. Freaky surpasses expectations and stands above recent Blumhouse films.

Freaky begins with two teen couples hanging out at a creepy mansion. Their parents are gone and it’s party time. They drink, hook up, and swap stories of the legendary Blissfield Butcher (Vince Vaughn). Several people have been murdered over the years, but there’s no real evidence the killer actually exists. The teens roam around and admire the bizarre artifacts scattered throughout the house. A jeweled dagger is the prize of the collection.

Kathryn Newton stars as Millie Kessler, a shy high schooler with a widowed mom (Katie Finneran) and overbearing policewoman sister (Dana Drori). She’s bullied by mean girls and aggressive jocks. Her two besties are the flamboyantly gay Josh (Misha Osherovich), and the caring Nyla (Celeste O’Connor). Millie aches to escape Blissfield Valley. She humiliates herself playing the school mascot, drumroll please… the Biting Beavers, to get into a good college. One night after being abandoned at a football game, Millie becomes the butcher’s next target. What happens next is a shocking surprise to them both.

The first aspect that caught my attention was the witty dialogue. The primary characters are smart and keenly self-aware. Director/co-writer Christopher Landon (Paranormal Activity: The Marked Ones, Happy Death Day) counters the stupidity of bumbling teens in traditional horror movies. This time they realize the gravity of their situation and act accordingly. Josh comments out loud to Nyla, “I’m gay, and you’re black, we are so dead.” Millie’s friends aren’t dumb enough to become easy prey. That distinction falls to Millie’s tormentors.

Freaky takes great pleasure in comeuppance. The jerks that made Millie’s school life hell get serious payback for their abuse. The Blissfield Butcher, in Millie’s body of course, gets creative in exacting revenge. Supporting characters meet insane, gruesome ends. The film is quite gory, but it’s done with a campy feel. Millie and the butcher realize the benefits and shortfalls of switching bodies. It’s easy to lure perverts as a teen girl, but not so easy to kill with a diminutive frame. Conversely, Millie learns to use the strength of a towering man. Again, Christopher Landon’s script has nuance and is thoughtful in particular situations.

Vince Vaughn is an absolute joy to behold here. He plays Millie with impeccable comic timing. His performance is akin to Jack Black’s in the new Jumanji films. Millie using the bathroom for the first time as a man will leave you in stitches. Vaughn also nails the sweet and feminine traits of a smitten teenage girl in love. A romantic subplot leads to a bizarre and humorous outcome. Vaughn owns this film playing the villain and heroine.

Freaky runs out of steam in the third act, but is fabulously entertaining up to that point. The filmmakers could have trimmed ten minutes for a leaner runtime. That’s a minor quibble for a good film. The production value, score, and sound effects are also well done. Get your Freaky on this Friday the 13th exclusively in theaters. The film is a Blumhouse production with distribution by Universal Pictures.