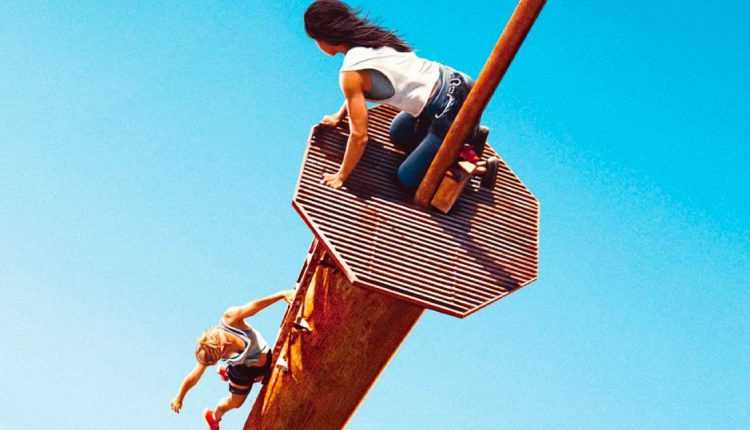 Best friends face a terrifying scenario when they attempt to free climb an abandoned TV tower. Fall is a vertigo-inducing thriller that keeps you guessing with a bombshell reveal. The plot follows the standard disaster track until clever twists ramp up the adrenaline. Slick technical direction sells the literal high stakes as the situation becomes increasingly desperate. A minor detour into second act melodrama almost derails the nail-biting crisis. Fall wisely resumes the tension and then barrels toward a sharp climax. It would have benefited from a leaner runtime but forgivable for overall popcorn cinema fun.

Hunter, now a bourgeoning social media star, has an idea to lift Becky’s spirits. She wants to climb a derelict, two-thousand-foot TV tower in the desert called B-67. The only way Becky can reclaim her life is to be adventurous once more. That’s what Dan would have wanted. Becky reluctantly agrees. They drive out to the middle of nowhere with excitement and trepidation.

B-67 soars into the blistering sky. Buzzards chew on the guts of a dying critter. They ignore “danger” and “no trespassing” signs. A nervous Becky ropes herself to Hunter; who begins to document their journey for her followers. They carefully make their way past broken transmitters to a small metal platform at the top. Hunter revels at their glorious achievement. Becky weeps in elation. They don’t realize that rusted bolts have fallen from the ladder. It crumbles spectacularly into a dust plume thud. They are stuck on the platform with no cell reception or supplies. Becky has a nasty gash on her thigh. The buzzards circle at the scent of blood.

Fall’s most important aspect is believability. Becky and Hunter’s dilemma doesn’t work if you think they’re on a set in front of a blue screen. Director/co-writer Scott Mann (Final Score, Heist) sells the nerve-wracking balancing act. The women sit precariously in the rushing wind. Their rescue attempts are intercut with long-distance and sickening overhead shots. The tower is a needle glistening in the brutal sun. Mann does a great job orchestrating the camera angles, visual effects, and sound design. There’s never a point where the film looks fake.

Fall manages its dramatic arc with mixed results. Currey sheds a river of tears as Becky. She’s been through a crushing tragedy so that’s expected. The script adds an unnecessary subplot between the women as they dangle. These ten minutes of meandering serves no real purpose. Mann has you hooked then swerves away from a gripping primary narrative. He tries to avoid the pulp label by beefing up the plot. I say own the grit and stick with it. Fluff detracts from entertainment value.

A third act whopper puts the ship back on course. It’s a doozy that caught me completely off guard. A good surprise takes Fall to another level. See this film on the biggest screen possible. Acrophobics should steer clear of this one.

Fall is a production of Capstone Global, Tea Shop, Flawless, and Cousin Jones. It will have a theatrical release on August 12th from Lionsgate Films.

J-Hope aka Jung Hoseok makes a heart for the ARMY; leaves them gushing over his cuteness [View Tweets]