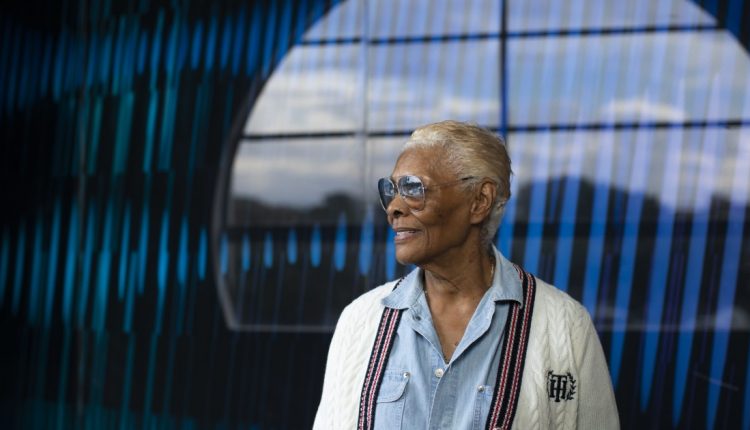 The latest place to hear Dionne Warwick’s voice — that one-of-a-kind instrument that defined pop sophistication in the mid-1960s — is up a few flights of stairs behind a grimy storefront several blocks from the beach in Venice.

This is the Ohm Zone, a combination recording studio, sound bath and meditation center owned by Warwick’s son Damon Elliott, where the Grammy-winning singer greets visitors in an introductory video full of enveloping tones and high-flown language about the restorative power of certain sonic frequencies.

Part of the booming wellness industry, sound baths are guided meditation experiences that use ambient music to draw practitioners into a state of deep contemplation. And over the past few years, they’ve cropped up in increasing numbers across Los Angeles as celebrities such as Charlize Theron and Adele have extolled their virtues.

But if other joints offer gongs and singing bowls, only the Ohm Zone boasts the serene vocal stylings of the woman who once soothed a weary nation with swanky hits like “I Say a Little Prayer” and “Do You Know the Way to San Jose.”

“Mom’s voice is the ultimate healing tool,” Elliott, 48, said on a recent afternoon as he sat next to Warwick — and near a large crystal he said was attuned to the heart chakra — inside the bright, minimally furnished space. “So I asked her, ‘Can you help me change people’s lives?’” Warwick, 80, looked on with motherly pride yet smiled knowingly when asked if she’d experienced a sound bath herself.

“No,” she replied. “I wish I had the type of brain that would shut down and leave me alone for a minute. But I don’t.” She laughed.

“Sleep is the only time when nobody’s bothering me.”

Indeed, the Ohm Zone (of which the singer is part owner) is just one of the many unlikely spots in which the surprisingly busy Warwick has turned up lately. Last year, she appeared on “The Masked Singer” in an elaborate mouse costume and in an installment of “Verzuz” with her longtime pals Gladys Knight and Patti LaBelle. Her active presence on Twitter, where she’s bantered with young artists like the Weeknd and Lil Yachty, led to a recurring bit on “Saturday Night Live” about a Dionne Warwick talk show.

“Hi, @chancetherapper,” she wrote in one tweet that earned more than 150,000 likes. “If you are very obviously a rapper why did you put it in your stage name? I cannot stop thinking about this.” In another, she wondered, “Who is Olivia Rodrigo yelling at on Good 4 U? I would like to know who we are angry with.”

“I’m just being honest — straight-up,” she said of her persnickety online persona. The “SNL” tribute was “wonderful,” she added. “I laughed like everybody else did. Then I thought, ‘Am I really like that?’”

With COVID-19 numbers trending downward, Warwick, who lives in her native New Jersey, hit the road again last month for her first live concerts — including a gig she played to a nearly full house at the Saban Theatre in Beverly Hills — since the beginning of the pandemic. And now, as a documentary about her career makes the festival rounds, she’s prepping for the Thanksgiving release of a newly recorded duet with Chance, who described Warwick in an email as a “legendary artist.”

“I was so humbled to learn that she even knew my name when she mentioned me on Twitter,” he wrote, “so to have the opportunity to collaborate together has been a great honor.”

In a way, the Chance song — an earnest gospel-rap tune titled “Nothing’s Impossible,” in which the two assure listeners that “nothing’s impossible if you believe” — can be thought of as a kind of sequel to “That’s What Friends Are For,” Warwick’s feel-good 1985 collaboration with Knight, Stevie Wonder and Elton John that was released as a benefit single to raise money for AIDS research. (According to Elliott, who produced “Nothing’s Impossible,” proceeds from the new track will go to fight homelessness.)

Yet the chart-topping “Friends” was itself a comeback of sorts for Warwick, who made her name with the string of impeccable singles she made with composer Burt Bacharach and lyricist Hal David before struggling to stay on the radio for much of the 1970s. After linking up with the veteran record exec Clive Davis, Warwick began to regain her mojo with plush adult-contemporary soul jams like “I’ll Never Love This Way Again” and “Déja Vu”; within a few years, she was a featured soloist alongside Michael Jackson and Bruce Springsteen on “We Are the World.”

Warwick was candid about the ups and downs of her career in her frank 2010 memoir, “My Life, as I See It.” The ’90s were even rougher than the ’70s, she writes, as hip-hop took over pop music and she caught flak for her role as pitchwoman for the fortune-telling-by-phone Psychic Friends Network. But the Warwick documentary, “Don’t Make Me Over,” offers a glossier take on her life story; it’s long on archival performance clips and testimonials from friends and admirers yet doesn’t have much to say about Warwick’s musical legacy.

Perhaps that’s because, as visible as she is as Aunt Dionne, it’s actually hard to hear where Warwick’s classic music — those gorgeous, complicated, effervescent Bacharach/David songs — fit into modern culture. Pop and R&B have gotten blurry and improvisatory, while “Walk on By” and “I’ll Never Fall in Love Again,” to name just two of her 56 singles to chart on Billboard’s Hot 100, are studies in crispness.

“It was pretty unique,” Bacharach, 93, said of Warwick’s “extraordinary musicianship.” “Nobody really came along after her who did the same thing.”

That’s also true of Bacharach himself, of course, with whom Warwick says she’s friendly these days after years in which they fought over music and even sued each other in a contract dispute. “We fell out, we fell back in,” she said. “Burt and I are more family than friends.” (David died in 2012 at age 91.)

Yet Bacharach, who recalls constantly battling with the singer over her smoking, doesn’t maintain Warwick’s public profile, which means you don’t feel the same disconnect. “I don’t even have a Facebook page,” he said.

After a cigarette break at the Ohm Zone, Warwick — who was nominated this year for induction into the Rock & Roll Hall of Fame but didn’t get voted in — said watching “Don’t Make Me Over” made her think about how often her songs have been interpreted by others but how there’s “still nothing like the original.”

One exception, she said, is “A House Is Not a Home,” which Luther Vandross “made his own” when he recorded it in 1981. “He didn’t sing it the way Dionne Warwick sang it,” she said, adding that as flattered as she was that Aretha Franklin cut “I Say a Little Prayer” a year after Warwick introduced the song, “there was nothing different about it aside from the voice. She didn’t alter it.” (Many listeners would disagree.)

Asked if she saw this year’s Franklin biopic, “Respect,” Warwick said she had. And what did she think?

“I didn’t,” she replied frostily. “I knew Aretha from when we were teenagers, and there was a lot missing” from the movie, she said, citing crucial figures who were left out, including Franklin’s longtime musical director, H.B. Barnum; drummer Bernard Purdie; and the Sweet Inspirations, the backing-vocal group (featuring Warwick’s aunt Cissy Houston) that frequently performed and recorded with Franklin.

Also: “Some filmmakers feel that they’ve got to find something cruddy and ugly in an artist’s life,” Warwick said. “Why?”

Given those feelings, has she taken on any sort of consulting role on the upcoming movie Davis is helping to shepherd about Warwick’s late cousin Whitney Houston?

“Not one thing,” she said. “I want them to let Whitney rest in peace. Leave her alone. Ten years [since she died] — it’s time to let her sleep.”

As she spoke, Warwick’s son fiddled on a computer, searching for the audio track for one of his sound baths; Elliott appeared eager to steer the conversation back toward the Ohm Zone, though he hardly seemed surprised to hear his mom speaking her mind on a delicate subject.

“I’m what is known as a loose cannon,” Warwick said. “That thing called a filter, what is that?” She laughed, the sound deep and raspy. “I threaten my friends who bring me all their troubles that I’m gonna hang my shingle out. It’s gonna cost them $50,000 a session.”

What’s on TV Tuesday: ‘A Night in the Academy Museum’ on ABC; ‘The Voice’ and ‘La Brea’ on NBC