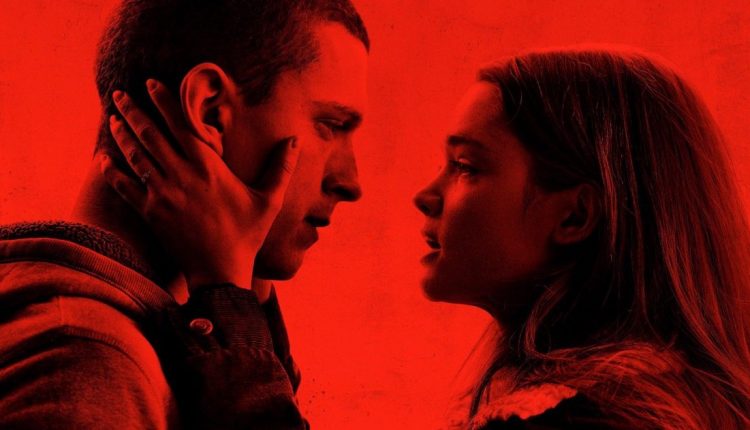 Directors Anthony and Joe Russo step away from genre blockbusters to deliver a searing, ultra-stylized descent into drug addiction and criminality. Cherry is the film adaptation of Nico Walker’s semi-autobiographical novel. It follows an unnamed protagonist through steadfast love, war, and a myriad of bad decisions. Stars Tom Holland and Ciara Bravo take the mantle of heroin-fueled romance from Dope Sick Love and Requiem for a Dream. Their journey into depravity hits with a visual and aural onslaught. The film overwhelms at times. Cherry pulls no punches for a gritty two hours and twenty minutes.

Cherry is told in chapters separated by a blood red filter. The film begins with the “Epilogue” in 2007 Cleveland, Ohio. A man (Tom Holland) walks begrudgingly to an ominous black car. He tells a story, through voice over narration and speaking directly to the camera, that started five years earlier at college. He notices Emily (Ciara Bravo) in an English class and is instantly smitten by her beauty. She sees him staring, and then makes a feisty introduction. He already has a girlfriend from high school, but cannot stop thinking about Emily.

RELATED: Tom Holland Is Flirting with the Idea of Becoming a Stand-Up Comedian

Their relationship is intense. He decides to enlist in the Army as a medic at the start of the Iraq War. The experience is brutal and horrific. His service in the “Triangle of Death” changes his personality. He returns to Emily with debilitating post-traumatic stress disorder (PTSD). She struggles to help him as he spirals out of control. Opioids become their calm in the storm. What starts off as Xanax and Oxycontin quickly leads to heroin addiction. They transform into depraved junkies willing to do anything for the next fix.

Anthony Russo and Joe Russo (Captain America and Avengers franchises) use multiple camera angles, complex lighting, and editing tricks in a frenetic, fever dream oriented first act. There are cut scenes, freeze frames, and changes in aspect ratio as the narrator meets Emily and gets ready for war. There’s so much happening on screen, I wondered if the film could keep up this near bewildering pace. Thankfully, everything slows down and is more pronounced from Iraq onward. The war is unforgiving and bloody as hell. Cherry retains a focused perspective as the characters immerse themselves into the heroin lifestyle. Their luminous love is now seen as dark and distressing. Cherry runs the cinematic gamut. I have no doubt that film students will be dissecting Cherry for years to come.

Tom Holland continues to be daring in his roles outside of the Spider-Man and Marvel Studios films. He showed significant range in The Devil All the Time, but is revelatory here. Holland’s turn as a drug-addled veteran is gut-wrenching. His scenes cooking and injecting heroin with Ciara Bravo are ugly and uncompromising. The young actors are entirely believable as wasted junkies. Kudos to the Russo Brothers, who were instrumental in casting Holland as Spider-Man, for giving him the opportunity to play such a risky character. The film hinges on his performance, not the bells and whistles.

Cherry can be difficult to watch. The aggressive filmmaking style and long runtime wears thin halfway through. The Russo Brothers smartly take their feet off the gas at this critical point. They allow the cast breathing room to show the awful truth of addiction. The withdrawal scenes are disturbing. Much like Requiem for a Dream, the ecstasy of getting high plunges quickly into a nightmare.

The Russo Brothers shine a glaring spotlight on the opioids epidemic and callous treatment of war veterans. They also tell a bittersweet love story. Cherry is a bold endeavor from two of Hollywood’s most successful directors. It is definitely not for everyone in their massive fan base. Cherry has extremely graphic scenes of drug use and combat violence. Children need to steer clear of this Tom Holland outing. Cherry is a production of AGBO and Hideaway Entertainment. It will have a limited theatrical release on February 26th, followed by a streaming debut March 12th on Apple TV+.