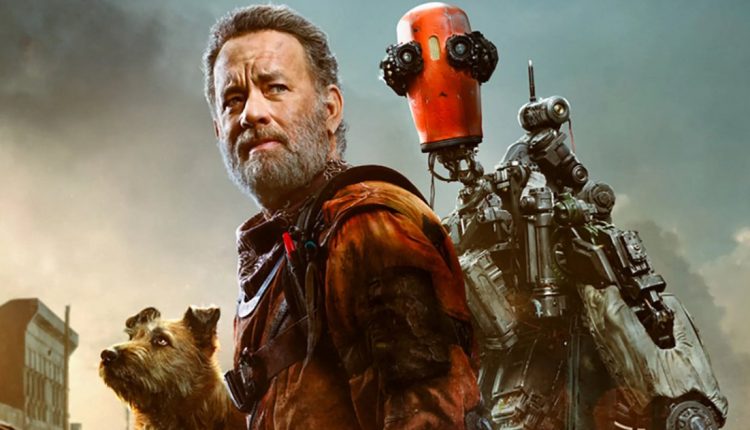 Tom Hanks never fails to impress as a one-man survivalist. This time around he’s not trapped on a deserted Pacific island, a la Cast Away; but on an epic, post-apocalypse road trip with truly unique companions. Finch is the story of an engineer’s quest to save his beloved dog in the horrific aftermath of a solar flare. It gets a little hokey and melodramatic. Then tugs on your heartstrings like a fiddle. Even the grouchiest curmudgeon will be moved. Finch shows the human experience through the eyes of a caring robot.

We first see Finch Weinberg trudging through a scorched city wasteland in a survival suit. He’s got Dewey, a small rover with a mechanical arm and basket receptacle, in tow behind him. A computer monitor constantly updates the sizzling outside temperature and levels of Ultraviolet (UV) radiation. Finch scours a decimated 99 Cents store in search of anything useful, which Dewey swiftly collects. A warning alarm has them both scrambling for shelter.

Finch returns to his wind turbine refuge. He’s greeted by his only living friend, a rascally pooch with an interesting name. That reveal is saved for a key flashback. Finch has various machines scanning and uploading specific books to a memory bank. He’s been meticulously building and programming a robot. Finch‘s project will have to come online much sooner than expected. An imminent super storm will shortly wipe out the remnants of St. Louis. Finch, his dog, Dewey, and new creation must leave immediately west. The mountains and coast may be their only sanctuary for survival.

Imagine Benji, Short Circuit, and Wall-E, blended with a sweetener for wholesome goodness. Finch has given his robot (Caleb Landry Jones) a library of information. It can recite every figure and statistic. But must learn how to interpret surroundings and react accordingly. It has to develop its own soul and conscience. The first act has Finch training the equivalent of a smart child. Who becomes more capable and reckless as it gains understanding. The robot, who hilariously chooses a name, is anthropomorphized to be likeable. These scenes are comical and tender. They lay the groundwork for much heavier themes.

Director Miguel Sapochnik, a multiple Emmy winner for HBO’s Game of Thrones, keeps Tom Hanks front and center without losing sight of the tragic circumstances. Finch cannot let his guard down for a second. The perils of the environment are equal to the desperation of the remaining people. This is a critical lesson that the robot must quickly learn. Sapochnik skillfully weaves in and out of tension. He never lets the superb visual effects and production design overtake the film’s message. Finch‘s “family” is always in danger. Love, friendship, and purpose defines the nature of our being. His desperate mission is to pass on the best qualities of the human spirit.

Finch states his intentions to the robot and frames their dire situation early on. The film ends up being fairly predictable because of his set up. This knowledge does not detract from the emotional journey. Tom Hanks, the dog, and robot will draw you in regardless. There’s never a dull moment at the end of the world. Finch is a production of Amblin Entertainment, Reliance Entertainment, and Walden Media. It will be released November 5th exclusively on Apple TV+.