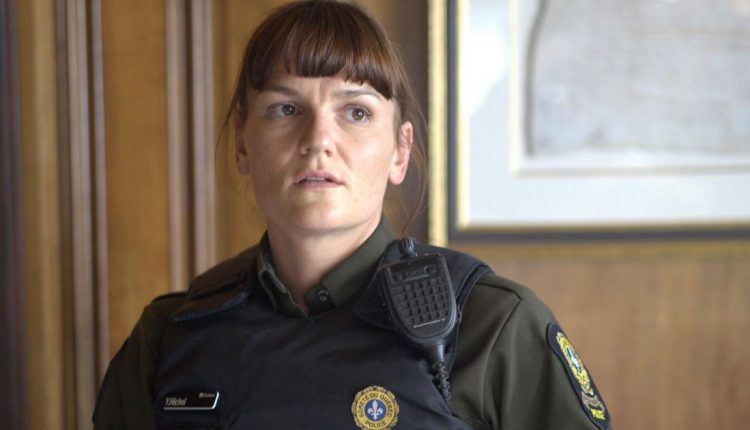 Three Pines is a new Prime Video series adapted from the Louise Penny books about the titular town and the police who investigate its surprising plethora of murders. Led by Chief Inspector Armand Gamache, played by Alfred Molina with a great deal of warmth and gravity, the Québécois police are not nearly as welcomed into Three Pines as they are in Penny’s books. Everyone has something to hide that needs to be revealed, and they resent the revelations.

Alongside Rossif Sutherland as Jean-Guy Beauvoir, Elle-Máijá Tailfeathers as Isabelle Lacoste, and a cast of Indigenous actors and Canadian industry regulars, Sarah Booth is instantly memorable as the fan-favorite character Yvette Nichol. With a kind of clumsy levity and organic lightness, she provides a wonderful balance to some of the surrounding seriousness and darkness of the characters and murder investigations. Booth spoke with MovieWeb about Three Pines and her character.

Yvette Nichol appears in at least five Louise Penny books as a newer agent in the Sûreté du Québec who is sent in to assist Gamache and is taken under his wing. But like much of Three Pines‘ vibe, the character is adapted into a somewhat different person. Booth brings a variation to the character that can catch audiences off guard with her delightfully offbeat performance. “In the books, Yvette is more hard-headed, a little more arrogant, and more of like, ‘I’m gonna do stuff my way, the better way,’ like a young generation coming in,” said Booth. She continued:

I feel like the creators of the show are the ones that are leaning towards her being more awkward. So when I got her character description, I obviously Googled who she was in the books and tried to get a sense of who she was. And then I realized, “Oh, this is very different.” So I just went with the breakdown from the producers, and gave them my spin on their version, what basically was my version of awkward and eager.

“It was fun to create that new version of her as a collaboration,” said Booth, who worked closely with director and producer Sam Donovan.

While she’s much more than mere comic relief, Booth had to tread carefully with playing a character who is much lighter and looser than her surroundings. “I would just kind of throw spaghetti at the wall and see what was sticking. Most of the characters in the series, as they should be, are very serious. Like, we’re dealing with murder,” said Booth, who depended upon the directorial gaze to ensure that she was consistent with the vision for Three Pines. “So I would sometimes ask if it’s working […] For me, just having that outside eye was everything.”

There was a lot of trust involved with Booth’s performance. Three Pines deals with some heavy topics, from abuse and death to the cultural reckoning over residential schools and the mistreatment and indifference toward Indigenous people, so Booth’s character could have easily become awkwardly incongruous. “When there was more sensitive subject matter, I would have conversations with Máijá before I said something that makes me go, like, ‘Oh, gosh,'” explained Booth.

The scenes between Booth and Elle-Máijá Tailfeathers, playing two very different female cops, are some of the best for character development and thematic continuity. Nichol’s ignorance of Indigenous issues and sometimes haphazard insensitivity can be funny in a facepalm way, but shines a fascinating light on the cultural dynamics at play here. “For Máijá, it was super important to have those moments in the series, because that represents the truth of the circumstances that a lot of Indigenous people have to deal with.”

The way in which Three Pines threads together multiple Penny novels across its eight episodes could have been incoherent or simply too much, but everything is sewed together well by an overarching story about the treatment of Indigenous people, especially women and children. The awful history of residential schools are explored, and Gamache investigates a missing woman, Blue Two-Rivers, who the police force has mostly given up on.

Despite the universal appeal of its mysteries (and the historically universal abuse of Indigenous groups everywhere), Three Pines is distinctly Canadian in how it explores the current reckoning in the country over time. “I think the media just couldn’t ignore it when they discovered all the unmarked graves, which was about a year and a half or two years ago,” explained Booth. “That happened as the scripts were being finished. So I think the timing of it all exploded.” She continued:

For me, I’ve never been educated about this in my life, and that’s on me, I’m an adult, right? I should’ve educated myself. But in schools, nothing was taught. You’re just like, “How are we not talking about what happened? It’s still happening, but the residential schools were still open until the early ’90s, I believe, or ’89. […] It was really nice on set to just listen, because every note that was given by the Indigenous consultants was taken. So I think what I learned was to listen, and also concentrate not just on the tragedies that this community has gone through, but to concentrate on the resilience that they have.

Chief Inspector Armand Gamache is one of the few higher-ups in the police force who takes a serious interest in pursuing the missing persons cases and crimes against the Indigenous community. Molina plays this character with great gravitas, but also a quiet compassion and kindness that isn’t often seen in dark TV crime dramas. Molina and Booth interacted with a warmth similar to their characters.

Related: Why Prime Video’s Three Pines Should Not Be Missed

“I feel like my relationship with Alfred, who I get to call Fred now,” smiled Booth, “was so playful, we had such a playful relationship on set. He was just so supportive in egging me on. I felt like I could try anything. Sometimes you go on big sets, and there are big stars, and you’re like, ‘Oh my gosh, just say your lines and don’t do too much.’ But with him, it just felt like a playground, and he has that theater company energy. He really was like a part of the troop. He was our number one, but there’s no hierarchy on this set. There’s no ego on this set. He’s just a wonderful man to work with, and he listens. He is just like a big teddy bear that you want to hug.”

Ironically, most of that “big set” actually took place mere minutes from Booth’s hometown, something which certainly added to the verisimilitude of her performance. She takes on an extremely authentic but subtle accent, which became surprisingly personal. “They did say that they would prefer if someone could do a French-Canadian accent,” explained Booth, “and I grew up an hour south of Montreal, in a bilingual town […] Everyone speaks English and French; Frenglish is a big thing, when we just switch back and forth between French and English in the same sentence or sometimes mid-word.”

“So I grew up around this accent my whole life. My mom speaks with this accent. So my inspiration is my mother,” continued Booth, who hadn’t actually seen the whole series when she spoke. “I’m so excited to see it, and my mom, I think is more excited than anyone in the entire world. We shot the series sometimes 20 minutes from my hometown, depending on what location we were at. So it feels nice that the biggest roll of my career is one that I got to do back home. It’s just so cool, you know?”

Audiences will know Booth when they see her — she’s the one who stands out in the darkness of Three Pines, bringing a bit more life and levity to this dramatic mystery. From Left Bank Pictures, Muse Entertainment, Amazon Studios, and Sony Pictures Television, Three Pines premiered with two episodes on December 2, with Prime Video adding two new episodes each Friday through December 23.