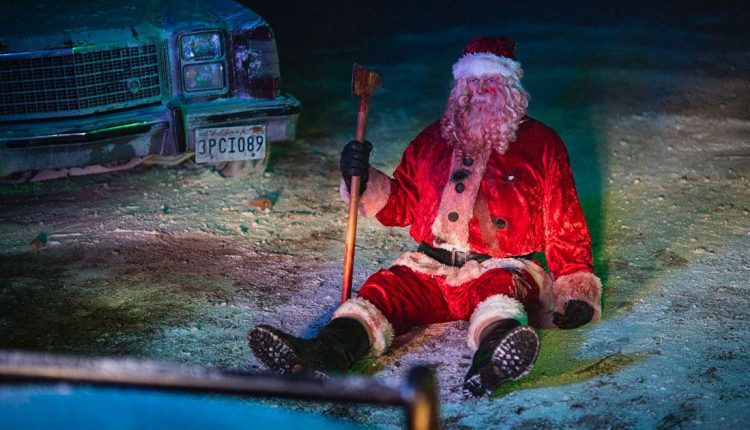 Writer-director Joe Begos’ creative ambitions are splattered—literally—all over Christmas Bloody Christmas, the new holiday horror film that finds a robotic toy store Santa Claus getting its wires crossed. The result finds the red-coated wonder going on a bloody killing spree, the likes of which hearken back to those trippy horror films from the 1980s. Bottom line: This holiday season, Santa is the one who’s naughty, not nice.

About that… Begos is quick to note he also used an animatronic Santa during the shoot, which amped up the eerie factor. Nothing like an ax-wielding robotic Santa Claus to brighten your nighttime shooting schedule. Or give Chucky a run for his money.

As for the overall plot, it’s Christmas Eve and spunky record store owner Tori (Dandy) just wants to get drunk and party—until that robotic Santa at a nearby store goes haywire and makes her night—and entire Christmas season—one big bloody mess. Santa’s unpredictable rampant killing spree finds him trekking through a neon-drenched snowscape—kudos to Begos and the special effects team—against a backdrop of drugs, sex, metal, and violence.

Ultimately, Tori is thrust into a blood-splattered battle to survive against a ruthless heavy metal Saint Nick. Begos spoke to MovieWeb about the film and unpacks the impetus for Christmas Bloody Christmas, and what he hopes it adds to the recent surge of twisted holiday tales.

MovieWeb: This is the third movie you shot in 16mm, which is a rare thing these days. Can you talk about that decision and how it inspires your work?

Joe Begos: I just fell in love with 16mm. I did it for the first time with the movie Bliss. Everybody was talking about how difficult and how expensive it is to shoot on film, but it adds so much. And it’s such a rare thing now. That’s what I wanted to do with Bliss, and it was such an easy experience. It really didn’t add that much to the budget, so I vowed to always shoot on 16mm. There’s something to it that just looks great. Digital cameras might be the only art form that has progressed backwards because with 16mm, there’s more latitude resolution. It’s better than digital. I don’t know why we’re shooting on digital. With 16mm, it’s like you’re watching the movie, and it feels like a dream. It feels more organic.

MW: You mentioned it’s like using practical effects versus VFX.

Joe Begos: Yes. There’s a reason why Quentin Tarantino, Christopher Nolan, and Steven Spielberg only shoot on film. There’s a transcendence to shooting a film. I actively went out buying camera packages, since they’re becoming harder to find. Nobody makes them anymore. I just wanted to give myself no reason why I shouldn’t ever shoot on 16mm.

MW: In addition to directing, you also wrote the film. What was the genesis of this wild story?

Joe Begos: I was asked to pitch a Silent Night remake. I love the iconography of that movie. The story is not really that engaging to me, so I wanted something that was completely out of left field. Christmas Bloody Christmas came from that. I wanted to do a one-night movie. I love movies that take place in one night. I didn’t just want to do a slasher film where there were characters we didn’t care about and see them killed off. I wanted to make something where you had time to build characters. I wrote something directly from my point of view—these are the type of people I hang out with, people like me, who have conversations and arguments. There’s a lot of in-jokes. My friends and I have spent many a drunken night feverishly debating, you know, the tenacity of Blair Witch and such. So, I was going to make this movie for them. And my writing would have a very pure feeling to it.

MW: In what ways did you guide Abraham Benrubi as Santa?

Joe Begos: He’s a friend of mine and a great f**king character actor. He was one of the main members on ER, he’s been in sitcoms, and a lot of westerns. When I wrote this, I didn’t have him in mind, but when we were casting Santa, I was going back and forth—should I cast a stuntman, but stuntmen are athletic, and I needed somebody barrel-chested and big. Then Abraham came to mind. I thought it would be insulting to ask this amazing character actor to do a role for eight weeks, but I did ask, and he was so [expletive] into it. Santa does have a beard, a hat—he does have a disguise. But you’re seeing an actor under that and because Abraham is a character actor, he knows the body language. He knows the looks; he knows how to sell certain things. He’s just got the shape, no matter where you shoot him, or what character he’s up against, he’s going to be towering over them. So, we’re going to be shooting at low angles. The only direction I really gave him was timing—how to look certain ways and which ways to look for pauses. But he had it down.

About That Robotic Santa

MW: What challenges did you encounter during the shoot?

Joe Begos: I had the genius idea of having the entire movie occur during a heavy snowfall. It was originally supposed to just be snow on the ground. But three days before we started shooting, I went into practical effects, and they showed me the snow machines where we could have snowfall. We were able to pull it off, but it was a [expletive] nightmare. Because it ruins the sound, and if the wind moves even one second, it blows out of frame. You need to be able to put the snow machines and operators in places where the cameras aren’t going to see them.

MW: And Abraham Benrubi wasn’t the only Santa you used?

Joe Begos: Right. We had to add that ‘robot’ at the end. My makeup effects people and I always dreamed about building something animatronic, whether it was a werewolf or something else. We went to the finance people, and it was like, ‘Alright, we’re going have a ‘tronic.’ None of us had done it before. That entire last scene in the record store with the robot, we had, like, 10 or 11 days to shoot, but we were constantly falling behind. Not only were we dealing with animatronics for the first time, but also a human actor. And the machine would go down, and they’d have to repair it for three hours. Basically, we were soaking an animatronic in real water—which is what you see in the film. It was very challenging. Ultimately, I think it looks awesome. But yeah, it was a nightmare for me with me and the camera, and I was just soaked in ice-cold water, sparks flying on my face. But the adrenaline of that is unbeatable.

MW: We’re seeing a bunch of holiday films with a horror twist. What’s the fascination?

Joe Begos: Personally, I’ve always liked that because I like things that are different. Maybe because I’ve watched so many movies, but I like things that stick out. I like sensationalism movies; heightened things you haven’t seen before. Maybe people are responding to stuff like that more now. All the streamers are releasing so many movies that it feels like an assembly line—more so than ever before in the history of movies. People watching this stuff and disposing of it. You go back and watch early ’90s direct-to-video movies, horror movies specifically, and they used to be the bottom of the barrel, the joke. But some of these movies are shot on 35mm with big, gorgeous locations and big ensemble casts. This was considered schlock back in the day. But it would be really huge now because it’s a [expletive] real movie. I think the consciousness of audiences are going towards that, too. You know, if something looks like a movie, or something feels more than the shroud of content spit out every week, there’s a chance for it to stick out.

Christmas Bloody Christmas, from RLJE Films, is in theaters and streaming on Shudder Friday, December 9.