The Most Magical Event of the Year 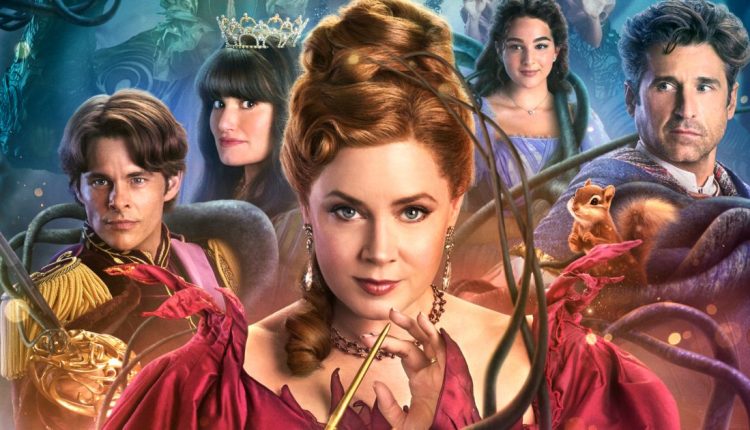 Disenchanted is a pleasant new chapter to Giselle’s story. The film has a joyful soundtrack while still possessing the charms of the original. It introduces fresh new characters and setting that serves as a worthy successor to the first film. Disenchanted is easily an entertaining film with great and energetic performances from the entire cast all-around and has tons of Disney nostalgia. Despite the film being a bit lengthy, Disenchanted is certainly a must-watch for both adults and children alike.

Disenchanted continues the story of Gisele (Amy Adams), a woman from the animated fairy-tale land of Andalasia, who found her true love Robert (Patrick Dempsey) after her fiancé’s evil stepmother Narissa (Susan Sarandon) pushed her into a portal that sent her to New York City. The film begins as Gisele and Robert are both exhausted from caring for their baby Sofia, and Robert’s daughter Morgan (Gabriella Baldacchino) is now an angsty teen who Gisele can no longer connect with. In need of more space, the couple move their family to a small town called Monroeville, where Gisele hopes to recapture the happily ever after of their earlier years together.

When Gisele and her family move to Monroeville, Edward (James Marsden) and Nancy (Idina Menzel) create a portal in the well in their backyard, so they could travel back and forth between Andalasia and the real world. As Gisele’s wish takes hold from her new wishing wand (gifted from Edward and Nancy), she realizes she won’t be able to prevent herself from becoming a wicked stepmother and enlists Morgan to get help in Andalasia. As she tries to fight off the evil persona taking hold of her, Gisele leads Morgan to the well, explains what she needs to do, and then, as the stepmother gains control, pushes her in. The latter move is a mirror image of the scene in Enchanted where Narissa, disguised as an old hag, pushed Gisele into the well in Andalasia that sent her to New York City.

When Morgan wakes up in Andalasia, she’s shocked to find herself in animated form and is surprised to see her perfectly drawn eyebrows. It seems Morgan is back to being her normal teenage self in Andalasia, instead of the fairy-tale that Gisele’s wish turned her into. Morgan looks around and sees the land is in ruins. Moments later, when Nancy and Edward find her, they explain that something is pulling the magic out of the animated realm. Morgan doesn’t remember much about what happened in Monroeville, but she remembers enough for Nancy to realize that Gisele made a wish with the wishing wand that was big enough to require all of Andalasia’s magic. If Andalasia’s magic disappears, so will Andalasia itself.

Meanwhile, in Monroeville (now known as Monrolasia), Robert returns home. He spent the day using the sword Edward gifted him to go on quests to save the townsfolk from giants, dragons, and other beasts. Robert is almost definitely a better lawyer than he is a medieval-style knight. As Edward implied earlier in the film, questing represents the pinnacle of personal fulfillment for men in fairy tales, so in Monrolasia, that has become his new vocation.

Robert finds Gisele waiting for him, dressed in a red gown, ready to go to the town celebration being thrown by Malvina. In the carriage to the party, Robert is confused by Gisele’s new attitude, particularly when she muses that they should get minions, brushing off his concerns about Morgan’s whereabouts. When Robert stops the carriage to get Gisele’s attention and insists that Morgan wouldn’t just disappear, she dismisses his worries. So, Robert decides to go look for his daughter; as he leaves, Gisele sarcastically wishes him good luck and continues on her way.

Morgan, determined to save both Andalasia and Monroeville, is certain that Gisele will be able to reverse her wish if she can just remember who she is. Nancy, knowing the key to Morgan’s plan is Gisele’s memory tree, takes her there with Edward in tow. But this isn’t anything like the collage of photos and construction paper that served as the memory tree Morgan created as a child; this is a fully grown willow tree with orbs holding individual memories. Unfortunately, the tree is dying, and the memories are blinking out.

Related: Mickey: The Story of a Mouse Review: An Uplifting and Magical Tour Through Time

When Morgan touches one of the memory orbs, a branch of the tree comes back to life, causing Nancy and Edward to realize that, because Morgan shares so many memories with Gisele, Morgan has the magic inside her to revitalize the tree and get Gisele to remember she’s a good person. After Morgan successfully restores Gisele’s memory tree, her and Nancy are transported to Monroeville with Edward staying behind. They arrive in Morgan’s new backyard, beside the well. The magic of Gisele’s memory tree still swirls around the pair. The memory magic glides upward and into the window of Morgan’s tower bedroom.

There’s A New Queen in Town

Meanwhile, Gisele’s best friend, the chipmunk Pip (who has been transformed into a cat) has gone to recover the wishing wand from Malvina’s henchmen Rosaleen (Yvette Nicole Brown) and Ruby (Jayma Mays). Pip sneaks into the room where Rosaleen and Ruby are guarding the wand. The pair of minions bicker about which one of them is Malvina’s favorite, only to have Pip interrupt as he grabs the wand, so he can rub his triumph in their faces and leave with the prize.

Pip catches up with Gisele just as her carriage arrives at the party, giving her the wishing wand. Across the ballroom Malvina (Maya Rudolph) sits in a throne-like chair; after Gisele makes her wish, Malvina’s crown appears on her head. Malvina and Gisele begin their fight with magic. Morgan, Robert, and Nancy arrive at the celebration with the memory tree, hoping to save the day as the destruction caused by Gisele’s wish begins to spread.

Disenchanted premieres via streaming on November 18th on Disney+.