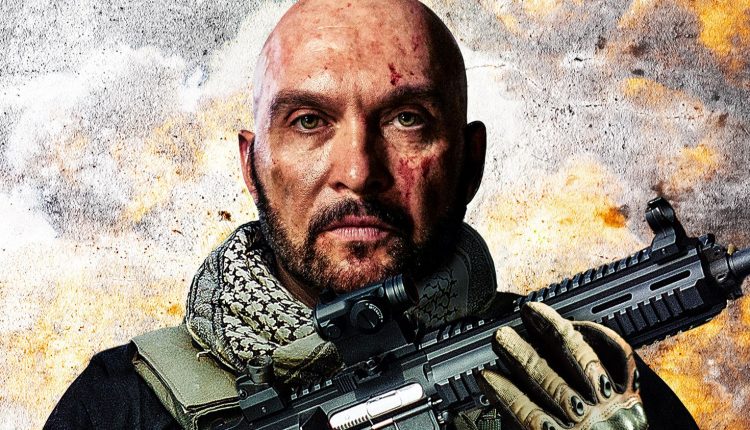 Maxx (Vandenberg, Triple Threat, Gangs of New York) is a legionnaire turned mercenary. When a mission in South America goes wrong Maxx is left for dead, but he is nursed back to health and reborn with a new outlook on life. He tries to live tranquilly within the confines of his new beliefs surrounded by his new friends at a church. But his peaceful days are short-lived when mercenaries he used to work with cross his path again and he is forced to revisit and face his own demons. His brutal past, war and violence have come looking for him again. His path to redemption is interrupted and Maxx becomes an avenging warrior using the skills that were his trade. Johnson directs from a script by David Filmore.

Tell us about your beginnings, Dom. Where are you from and how did you end up in the states?

Dominique Vandenberg: I was born in Belgium and grew up in a small village called Waasmont where I had a pretty normal life until I was 9 years old. One of my older brothers died from cancer at age 19 and I then was send to live at my my grandmother’s farm. After school, I poured all my pain and feelings of my brother’s loss into the cold cup of martial arts training and day dreaming about my forthcoming future. I pondered about my own mortality at a young age daily.

Many years later, I stopped pondering. Instead, I was looking for a good death for myself… when I served with the French Foreign Legion 2 REP regiment, I was hoping to die Cameron style. When I became an independent soldier after 5 years in 2 Rep, I kept surfing the warzones hoping to catch the perfect wave. But after many battles not finding the good death that I was looking for, I realized that the universe has something else for me in mind. After my last independent job in Yugoslavia, I moved to Thailand and after came to the USA.

Growing up, did you envision being an actor – or, in this case, an action star?

Dominique Vandenberg: Not really… but I always loved cinema and knew I was not cut out for a normal job.

Who did you idolize growing up?

Dominique Vandenberg: Wow… there were so many people I looked up to. My judo and karate senses played a big part in my life. I looked up to warriors like Miyamoto Mushashi, a Japanese Legendary samurai, and the Finnish soldier Lauri Allan Thorni .

And my grandma Sabine who was stubborn in a way that made me proud. During WWII, she had hidden Jewish families from the Nazis while everyone in the village had turned their backs. She had followed her conscience and done what was right and paid a heavy price. A Nazi collaborator in the village turned in my grandparents, her husband was arrested and taken of to a forced labor camp. After the war, he came home but died soon after from TB that he had caught working there. My grandmother nor her husband swore that they never regretted the act that had cost them that much. She would show me the letters that she was still getting from the children of one of the families they had saved. That showed me that there are more ways to be a warrior than to be a man at arms though they never lifted a gun or raised their fist in anger. Sabine and her husband belonged to the elite ranks of the warrior caste.

Anyone whose career you’ve tried to emulate?

Dominique Vandenberg: I liked Toshiro Mifune and Tatsuya Nakadai a lot. I also watched many movies with Clint Eastwood… Mostly his Spaghetti Westerns. I also was intrigued by the French films like Jean Pierre Melvilles’ Le Samourai with Alain Dellon. As far as my career, I would like to hope to be like Charles Bronson in Hard Times, a quiet character with a heavy fist. I guess I like anti-hero characters that don’t talk too much but express themselves with actions they take.

Do you agree that today’s action heroes – Jason Bourne, John Wick etc. – rely more on their smarts and intellect as much as their brawn and fighting skills though?

Dominique Vandenberg: Bourne and Wick are both very intelligent characters but they also are trained in weapons and martial arts. If you only have smarts, you just have a nerd who cannot fight himself out of a paper bag .You need both to be effective and put plans into actions.

When did you and Jesse V. Johnson first work together?

Dominique Vandenberg: Jesse and I met on Mortal Kombat. He was a second AD and I played a small part in the film. We instantly hit it off because we both loved films so much and had many of the same interests

When did the idea of The Mercenary come up?

Dominique Vandenberg: I created the Maxx character more then 10 years ago when I was a board member at magic leap studios and the owner had asked me to come up with some ideas for a comic book. I created a graphic novel called “Vive La Mort” and Maxx the lead character in the Mercenary was one of the soldiers in the novel.

Was the movie written specifically for you?

Dominique Vandenberg: I came up with a storyline and synopsis with Jesse and then hired David Filmore to turn it into the script.

Some really brutal moments in the film – did you find anything difficult to do?

Dominique Vandenberg: The most difficult was always the race against time when you have a small budget and do lots of action. Running from first unit to second unit while changing clothing for the next scene as the sun goes down. I took many rehearsals beforehand with my stunt coordinator Luke Lafontaine and fight choreographer Malay Kim.

How was it working with Louis Mandylor?

Dominique Vandenberg: Louis was great a very underrated actor who was very generous in the scenes we did together and let me shine. We were fortunate to get him and Carmen Argenziano who played father Alias.

Is there a scene in the movie you’re particularly proud of?

Dominique Vandenberg: The knife fighting scene with one of the LeClerc’s men, Rodriguez, was cool. Also the fight scene by the river with two rebel soldiers were shot in les than one hour but it came out to be pretty cool. The sunset was very close and we were loosing the light and the blood spraying machine stop working. The stunt man sprayed the blood manually using a syringe while he performed his fighting moves.

Can you see yourself playing this character again?

Dominique Vandenberg: I am currently working on the script for The Mercenary Part 2. Maxx finds himself in Tjechyna this time. I produced this film using most of my savings so I hope we can do well with the first movie to fund for part 2.

The Mercenary is on DVD and Digital right now from Uncork’d Entertainment.

MODOK Has a Major Role in Ant-Man 3, But It’s Not Jim Carrey Playing the Marvel Villain?

New rumor claims that MODOK will play a major part in Ant-Man and the Wasp: Quantumania, debunks idea that Jim Carrey will play the Marvel villain.

Contributing writer for Movieweb since 2001. Owns a dog who loves watching Milo and Otis on repeat.

More
From B. Alan Orange