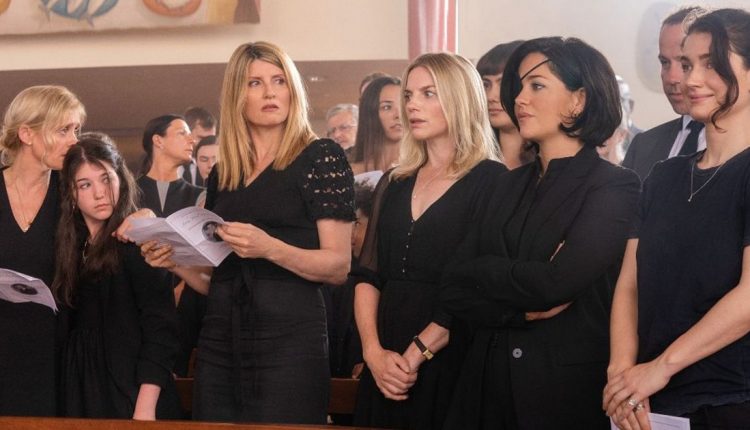 In-laws are a curious breed. Love them or despise them, they’re around to stay. Well, not if you’re the Garvey sisters in Bad Sisters (premiering Aug. 19), one of the best comedy-thrillers of the season. Here, siblings Eva, Ursula, Bibi, and Becka (Sharon Horgan, Eva Birthistle, Sarah Greene, and Eve Hewson) find themselves awkwardly acting upon a drunken joke to get rid of their brother-in-law John Paul (Claes Bang), all to spare their sweet sister Grace (Anne-Marie Duff) from the sexist-racist-sociopath she married.

It’s wicked fun to watch over the course of 10 episodes. But as the stars of the series, created by BAFTA Award winner Sharon Horgan (Catastrophe, Pulling), share more about the dark comedy with MovieWeb, it’s clear there’s much more depth to the story.

“What struck me when I read it is that tone,” noted Birthistle (The Last Kingdom), who plays sister Ursula, somebody who’s emotionally running away from her own marriage. “The show has the darkness and the light— the comedy—but at its heart, a very serious subject matter. It’s about an abusive relationship.”

“I haven’t seen anything like it,” added Greene (Penny Dreadful, Frank of Ireland)—as sister Bibi, she has her own reasons for wanting John Paul out of Grace’s life. “Not only does it capture Ireland in a beautiful way, but we also see that these sisters are messy and complicated. They’re not perfect women and what they’re doing is morally incorrect.

“But love kind of overrides all that,” she added. “To have five strong female leads and strong female directors is rare. And there’s this strong woman at the helm with Sharon as the showrunner, executive producer, and writer. It’s been really exciting.”

Understanding The Characters of Grace and John Paul

Horgan has a knack for dialogue. Her previous outings, Catastrophe and Pulling turned enough creative heads that the woman wound up with a sweet deal to create exclusive content for Apple TV+. We’re all the better for it, frankly. It’s rare to find a series that knows how to balance comedy and gritty real-life dilemmas. Bad Sisters stands out for its remarkable scripts and a stellar cast — Brian Gleeson, Daryl McCormack, Michael Smiley, and Saise Quinn round out the outing.

Duff (Shameless, Sex Education) and Bang (The Affair) bring a level of believability to Grace and John Paul. We’ve seen this kind of couple before (to varying degrees) in real life.

“When we meet Grace, she’s such a lost soul, isn’t she?” Duff said. “We can’t even see who she is. She’s translucent because she’s been inside this bad relationship. She’s in full of grief mode and everything is about him. That can often be the case inside of coercive relationships. Everything becomes about the bully. You’re completely defined by their view of you, and you shapeshift; try to be everything you can for them; try and make things better. So, for me, that was a huge creative challenge — trying to flesh out that individual and give her nerve endings; make them seem like a real human being inside of that fogginess.”

“Then I guess you hope that there might be somebody watching who feels some connection to that,” she added. “And that it might help them appreciate something that’s happened to them. You never know as a storyteller what areas you’re reaching to in the universe.”

For Bang, morphing into a character you can’t help but despise had its challenges, too.

“It’s important as an actor to know, ‘what is the function of this; what do we need this guy to do?’” he said of the role. “In order to stretch it over 10 episodes, we really needed to build on how unsympathetic he was; keep that fire going where you just want to kill him. Anne-Marie and I worked closely together on keeping it real. And the audiences come in so late in their relationship. They come in when there’s no way back. We worked hard to create a sense of ‘what’ and ‘why’ these people are together. What happened? We also plotted little moments of affection. Not just to make an obsessive caricature.”

Duff is quick to point that Horgan was very clear about the world she created so that when the actors actually stepped into that world with her, it was very much realized.

“You don’t devise that world with her,” Duff shared. “Sharon has a real sense of what it is. And even if you don’t have all the episodes in front of you yet, you know where you are. There’s a real strength to that. There’s fluidity and a subtleness in her writing. Sharon can be both desperately tragic and hilarious in one moment. Her work ethic is off the scale. I mean, to write, to showrun, and to star in something is a phenomenal achievement.”

At the core of Bad Sisters is the Garvey clan. The siblings are bound together by the premature death of their parents. Hence, the gals promised to always protect one another. Then Grace married John Paul and their bonds started to tatter a bit.

“I don’t know how Sharon does it—finding the right balance and knowing when to lean into the comedy, when to lean into the thriller aspect of things,” Birthistle shared. “First and foremost, I hope audiences will be entertained. At the end of the day, this really is a fun show, and I hope people fall in love with the Garvey girls. We did. I think that comes across on screen. It also sheds light on relationships in an interesting way that will hopefully provoke conversation.”

For Greene, playing eye-patched Bibi was an unforgettable experience.

“I’ve never really played someone like Bibi before — maybe in theater but certainly not on screen,” she said. “She’s just front-footed. She has no filter whatsoever. When I first read the script, I thought she was a bit harsh; that we came across a bit mean.”

Interestingly, Greene’s character is in a same-sex relationship in the series, and the couple parents a young child. It adds another layer of depth to Bibi — what she deals with as a person, a partner, and a mother.

“Actually, it’s been really refreshing to play somebody who is just who doesn’t give a shit about what people think of her,” Greene said. “What she does care about is her sisters and their happiness. And she’s the instigator in starting this whole plot of taking out John Paul and saving her sister. I’ve been a huge fan of all the girls’ work, so this was a real honor to work with them every day. The scenes when we’re all together were magical. We all felt like sisters.”