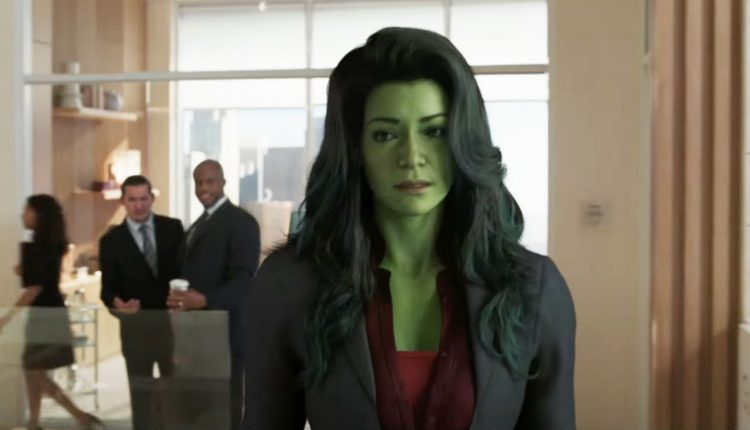 She-Hulk: Attorney at Law launches the MCU into unfettered sitcom shenanigans with mixed results. The show is a superhero, CGI-powered blend of the classic Ally McBeal and naughty British hit Fleabag. Star Tatiana Maslany breaks the fourth wall by talking directly to the audience. She acknowledges being in a television show with numerous asides. This isn’t done in a particularly clever way. It’s a cheap method for unloading direct exposition without acting. Critics were sent the first four of the nine-episode season. The premiere flops with a forced fire hose delivery. The series thankfully gets progressively better. Humorous supporting characters and a charming lead performance saves the silliness.

The premiere has Jennifer Walters (Maslany), a Los Angeles district attorney, prepping her closing arguments on a big case. She’s got her paralegal best friend, Nikki (Ginger Gonzaga), and a male chauvinist pig colleague (Drew Matthews) at her side. An attack by the enhanced social media influencer, Titania (Jameela Jamil), reveals Walters secret. She transforms into a 6’7″ green behemoth with incredible strength and near impervious skin.

Jennifer pauses the action to explain her hulking physical change. She’s the cousin of Bruce Banner (Mark Ruffalo). He engineered a device to return to normal after the events of Avengers: Endgame. An other-worldly car accident gets his blood into her bloodstream. Luckily, they share the same genetic factors that prevent gamma radiation poisoning. Bruce reverts back to Smart Hulk and whisks her away to Mexico for training. She must learn to deal with controlling her raging alter ego. Drumroll please, Jennifer is not Bruce 2.0. She can not only switch at will but also retains her personality.

Jennifer returns to LA branded as the She-Hulk. She thinks her law career is kaput. The powerful firm of Goodman, Lieber, Kurtzberg & Holliway (GLK&H) wants her to head their superhero law division…as the She-Hulk. Jennifer accepts their offer but is shocked by her first case. She must argue for the parole of Emil Blonsky (Tim Roth) aka the Abomination. Jennifer enters a new reality of unwanted fame that cripples her dating life. But she can always rely on her dear cousin, father (Mark Linn-Baker), and bestie to pull through.

The premiere unloads its plot like a dump truck. Showrunner/head writer Jessica Gao, known primarily for Nickelodeon shows, and director Kat Coiro (Marry Me) get down to business quickly. They establish characters and the premise in a flash. Jennifer and Bruce are tussling as Hulks within minutes. The lack of nuance and goofy overall tone had me worried. The pace slows down as the series settles. Appearances by MCU favorites, insert Wong (Benedict Wong) here, add likeability and narrative heft. Each episode has Jennifer dealing with a new superhero case. Subplots are also introduced that carry over with various characters.

She-Hulk: Attorney at Law unabashedly gears itself to the trials and travails of millennial women in true sitcom fashion. Jennifer has to juggle her career, love interests, and superhero enemies. The 90s hit Ally McBeal came to mind immediately. If only the show were as well-written and executed. The slapstick hits a brick wall at times. The supremely talented Tatiana Maslany mitigates the overly absurd elements. Fandom will be divided. Those into serious MCU themes and storylines will not be happy. I’m in for the long haul based on the initial episodes gradually improving. Stick around during the credits.

She-Hulk: Attorney at Law is a production of Marvel Studios. The series premieres on August 18th on Disney+ with new episodes every Thursday.