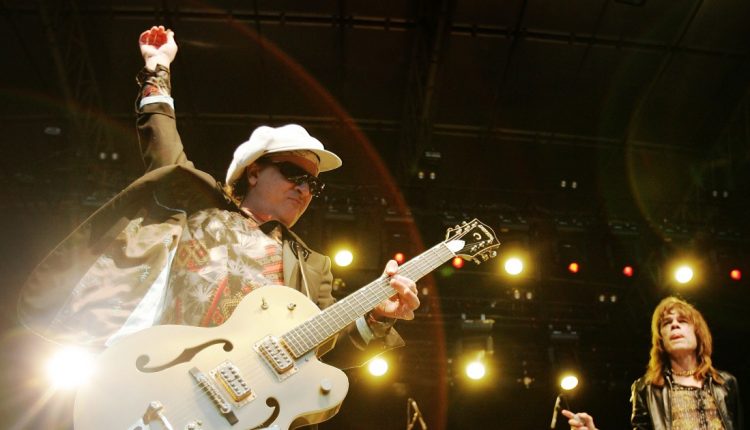 Sylvain Sylvain, whose guitar playing in the early 1970s as a member of the New York Dolls helped lay the groundwork for what would become punk rock, died Wednesday in Nashville. He was 69.

His death was confirmed by his wife Wanda O’Kelley Mizrahi. She wrote on his Facebook page that the guitarist had “battled cancer for the past 2 ½ years.” In 2019, Sylvain started a GoFundMe to help pay for his treatment.

Along with the announcement of his death, Sylvain’s wife posted a remembrance by Lenny Kaye, the venerable punk historian and guitarist, who called Sylvain “the heart and soul of the New York Dolls” and described the band — a brashly theatrical outfit made of equal parts glam and grit — as “a quasar in the rock firmament.”

David Johansen, the Dolls’ famously rubber-faced frontman, wrote on Instagram that Sylvain was his “best friend for so many years” and that he remembered the first time he saw him “bop into the rehearsal space/bike shop with his carpetbag and guitar.”

With their outre style and their chaotic presentation, the New York Dolls — named, as the story goes, after a toy repair shop Sylvain spied across the street from a Manhattan clothing store where he once worked — turned heads immediately when they began playing clubs dressed in drag, hair teased and faces made up, in 1971. Johansen and Thunders, on lead guitar, took center stage with a rowdy visual interplay that evoked Mick Jagger and Keith Richards of the Rolling Stones.

As the band’s rhythm guitarist, though, it was Sylvain whose sleazy-catchy riffs provided a solid foundation for all the flamboyance; he also played piano on the group’s self-titled 1973 debut, which was produced by no less a pop perfectionist than Todd Rundgren. Neither “New York Dolls” nor its followup, 1974’s “Too Much Too Soon” (which the group made with the girl-group impresario Shadow Morton) sold well. But along with early records by the Velvet Underground and the Stooges, the New York Dolls’ LPs inspired countless musicians who later drew on their ideas about attitude to create punk.

Sylvain Mizrahi was born Feb. 14, 1951, in Cairo, though his family soon left Egypt, stopping first in France before settling in New York. He designed clothes as a teenager and then began playing music, cycling through several acts that eventually became the Dolls.

The group’s down-and-dirty approach was a response to the structural pretensions of the “stadium rock era,” as Sylvain said in a 2006 interview with Brooklyn Vegan. “The 20-minute drum solos. Songs were a big operetta, and they were sort of boring. They lost their sex appeal.”

“There wasn’t a lot of intellectualizing going on when we started,” Johansen said in “Please Kill Me,” Legs McNeil and Gillian McCain’s seminal 1996 oral history of punk. Of the Dolls’ iconic thrift-store look, for which Sylvain was widely credited as the mastermind, Johansen said, “We were just very ecological about clothes.”

With both of the band’s albums having bombed, and Thunders and Nolan each in the grip of a debilitating heroin addiction, the Dolls hired Malcolm McLaren to oversee an attempted reboot that had them toying with Communist iconography. When that failed to excite audiences — “We forgot the Vietnam War was still on,” Sylvain later told the Guardian — the group split around 1975; McLaren then suggested Sylvain join a band he was putting together in London called the Sex Pistols, but the job didn’t work out.

After the Dolls’ breakup, Sylvain embarked on a moderately successful solo career while Thunders and Nolan formed the Heartbreakers and Johansen reinvented himself as the arch lounge lizard Buster Poindexter. By the early ’90s, Sylvain was selling clothes again in New York — including, as he recounted in New York magazine in 2006, to the members of Poison, one of the many hair-metal acts that sold millions of records replicating the Dolls’ once-confrontational style.

“They asked me for my autograph,” Sylvain recalled of the day his admirers wandered into the store he was managing. “I should be bitter.”

In 2004, Sylvain, Johansen and Kane — who’d moved to Los Angeles and was working for the Mormon church — reunited for two concerts in England at the invitation of Morrissey, the British pop star. (Nolan and Thunders had died more than a decade before.) The comeback shows were well received, but the sense of triumph was cut short when Kane died just weeks later from leukemia.

Johansen and Sylvain soldiered on nevertheless, releasing a string of acclaimed Dolls albums between 2006 and 2011. Sylvain toured with Glen Matlock of the Sex Pistols and played in a band, the Batusis, with another proto-punk luminary, Cheetah Chrome of the Dead Boys.

In his tribute, Kaye said Sylvain’s role in the New York Dolls was as “lynchpin, keeping the revolving satellites of his bandmates in precision.” The Dolls, he added, “were the heated core of this music we hail, the band that makes you want to form a band.”

Movies on TV this week: ‘The Phantom of the Opera’ on TCM