Surf Curse: From obscurity to scandal to a major-label deal 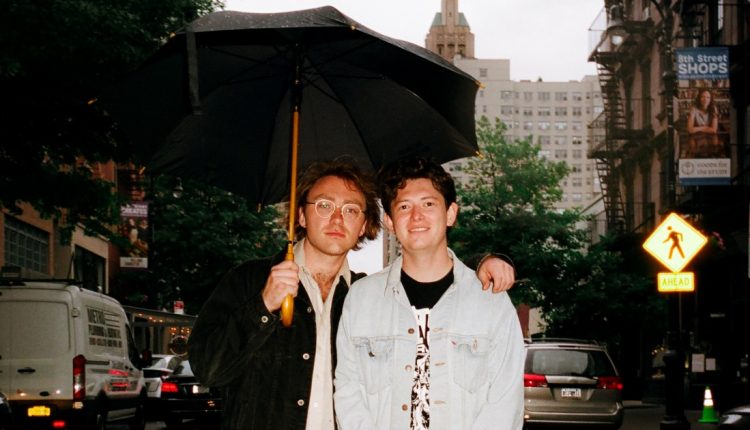 Nick Rattigan and Jacob Rubeck knew something weird was afoot with their band Surf Curse when they saw a TikTok video about “Scooby-Doo’s” alleged polyamory subtext, soundtracked by their 2013 single “Freaks.”

“We have a group chat with our manager, and she kept saying, ‘Oh my God, ‘Freaks’ is getting all these plays.’ But to be honest, we were kind of numb to it,” drummer and singer Rattigan said.

Before this spring, the L.A. duo had zero reason to think that their old garage-punk song, off their independent album “Buds,” was going to be the breakout online rock hit of summer 2021.

“But then we started seeing all the TikTok videos that kids were making with it that were so insane and absurd,” Rattigan continued. “It was all very strange, but I guess this is why the song has 150 million streams on Spotify right now.”

“Freaks” doesn’t scream “pop hit.” It’s sparsely produced and red-lined with distortion. The lyrics lean morbid: “My head is filled with parasites / Black holes cover up my eyes.” But there is something cathartic and relatable in its main chant — “I am just a freak” — that aligns with perennial teen angst and the formatting of TikTok memes. Unrequited crushes, fashion missteps: “Freaks” can soundtrack whatever you’re cringing about.

The reams of “Freaks” videos on the service — at least 400,000 and counting — earned the L.A. duo hundreds of millions of streams across platforms, a major-label deal with Atlantic Records and an unexpected post-pandemic life after a decade in the DIY trenches.

“We wrote that song when we were 18, so the lyrics and everything were very youthful, and I guess that’s why teens still relate to it,” guitarist Rubeck said (the bandmates are now in their late 20s). “We’ll see some Adonis-looking guy on TikTok being like, ‘These lyrics blow my mind.’ I guess people can relate to it today.”

If you were knocking around the downtown L.A. all-ages club the Smell in the 2010s, you probably heard “Freaks,” or a whole bunch of songs more or less in line with it. Surf Curse, which formed in Reno before moving to L.A., was part of a boomlet of bands born in the wake of Best Coast and Wavves that played catchy, melancholy punk songs about feeling lost and lonely in the SoCal sun.

Surf Curse (and Rattigan’s other project, the Secretly Canadian-signed Current Joys) had a solid if still-underground career, releasing three albums, including 2019’s “Heaven Surrounds You.”

Why did the near decade-old “Freaks” take off now? Who knows. The band certainly doesn’t.

“We had to grind our teeth struggling this long, hoping that if we just kept working, there was some cosmic energy that rewards you when you’re not looking,” Rattigan said. “Obviously, we didn’t expect it to be a global phenomenon on an app 10 years later, but that’s just how things are discovered now.”

Adam Schulz, the band’s A&R rep at Atlantic, knows TikTok fame is the currency for pop breakouts today. Like The Neighbourhood’s “Sweater Weather” (another 2013 rock song given a second wind on TikTok recently), “Freaks” is both a nostalgic artifact from a more carefree time and a fresh sound in streaming’s perpetual present tense.

“When I heard ‘Freaks’ for the first time, the thing that stood out to me was how exhilarating the song is,” said Schulz. “That energy is consistent across the band’s catalog, and once you watch videos of the band performing live, you realize it translates even better in real life.”

Of course, no one has been able to see Surf Curse live while the pandemic shut down venues (and fans might have to wait a little longer — a fully vaccinated Rattigan says he’s currently at home recovering from COVID-19). Atlantic rereleased the single in May and is promoting it to rock radio (it hit No. 17 on Billboard’s Hot Rock & Alternative songs) but also to Spotify’s key Pop Rising playlist. The song has since broken into Spotify’s Top 50.

“The biggest challenge is building a story outside of TikTok,” Schulz said. “A lot of records that work on TikTok never escape the platform. Fortunately, ‘Freaks’ was a sticky record in the L.A. indie rock scene and the band had a dedicated following long before the TikTok moment, so we had a foundation to work from.”

The left-field success of “Freaks” is a happy surprise for the band, but it also comes at a complicated moment for them.

In August 2020, local indie label Burger Records dissolved amid multiple sexual assault and misconduct charges against acts in the SoCal punk scene. As many young fans came forward with allegations against bands in that scene, two anonymous social media accounts made sexual misconduct claims against both members of Surf Curse. Their label Danger Collective announced that it would not continue working with the band. (Surf Curse played Burger’s Beach Goth festival in 2016 but were not signed to the label. Representatives for Danger Collective did not return requests for comment.)

“An Instagram account that has since been deleted, post[ed] an anonymous message accusing me of a heinous crime against another human being,” Rubeck wrote on social media in August 2020. “There hasn’t been a moment in my life that even comes close to what was described in that post…The person who made the claim, whose identity I don’t know and whose privacy I want to respect, voluntarily retracted their statement against me and cleared my name…I want to make it clear we never made any threats to the page, legal or otherwise.”

(That accuser, in a now-deleted Instagram post on the account Creeps in the Scene, said that they were mistaken about who attacked them: “It was not Jacob who was assaulting me… I don’t want to ‘cancel’ someone who doesn’t deserve it. In light of this new information, I would like to retract my statement.”)

At the same time, Rattigan also denied two since-deleted anonymous accusations of him harassing fans at shows. “The conversation around harassment is vital to this community and it devastates me to be put in this position,” Rattigan wrote at the time. “These allegations are simply untrue.”

“There was a lot we learned, and it was a very difficult time,” Rattigan said of the accusations. Asked to elaborate on what they learned from the experience, he declined. “We came out of it. We feel pretty good about everything now, and that’s really all there is to say.”

Surf Curse is writing new music for a future Atlantic release and plans to tour in 2022. Even if they don’t quite understand TikTok, or use it much themselves, Rattigan and Rubeck are hopeful about whatever it means for the band’s future.

“We’re grateful but vigilant,” Rattigan said. “It’s challenging as artists because you’re constantly trying to move on to new things. But people don’t like the time they’re living in, and diving into the past is something they do when they feel that way.”

Jennifer Lopez and BTS follow each other on Twitter; is a new collaboration on cards? ARMY thinks so – read deets