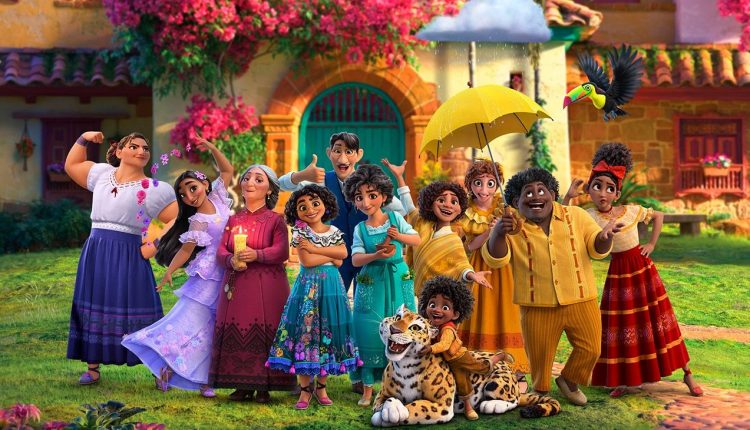 An ordinary young woman (Stephanie Beatriz) tries to save her magical family in Encanto, exclusively in theaters.

Disney Animation delivers bold, multicultural storytelling that tackles thorny issues head on. Encanto is the vibrant tale of a young latina woman trying to find her place in a truly extraordinary family. Each of her relatives were granted a unique power by a magical candle. Which saved her pregnant abuela, grandmother, as a young refugee fleeing tyranny. The film is loaded with musical numbers that didn’t resonate with me all. Thankfully, the animation is absolutely stunning. It helps to deliver an important message about the hopes and dreams of the disenfranchised.

Encanto begins with the Madrigal family preparing their hidden village for a special ceremony. Young Antonio (Ravi-Cabot Conyers) has reached the age where his power is bestowed. His dear cousin, Mirabel (Stephanie Beatriz), the only Madrigal not given a power, doesn’t want him to face her crushing disappointment. Mirabel lives in the shadow of her gorgeous older sister, Isabela (Diane Guerrero), who can grow flowers in an instant and is “perfect” in every way.

The film periodically flashes back to tell the story of Abuela Alma (Maria Cecilia Botero). Pregnant with triplets, she fled her home with her beloved husband. The candle lit her darkest hour, created their magical home, Encanto, and gifted special abilities to her offspring, except for Mirabel. Alma fiercely protects the candle. It’s magic guards her family and the village from the evil of the outside world. But a long hidden prophecy has surfaced to threaten the Madrigal utopia. Alma’s only son, Bruno (John Leguizamo), who could see the future, vanished after a terrifying revelation. Mirabel must find the truth behind his vision. Everything that the candle’s magic built is in danger.

Mirabel has a sibling rivalry that defines her and her sister. She’s also keenly aware of her abuela’s tragic past. And that her powerless status has made her an outcast in Alma’s eyes. She desperately yearns to be worthy of her Madrigal blood. Mirabel was heartbroken by the candle’s snub. Encanto is her search for meaning and belonging. The film’s dramatic arc gets quite heavy. Buckets of tears are going to be shed here.

The songs by Germaine Franco (Coco) and Pulitzer Prize winner Lin-Manuel Miranda (Hamilton, In the Heights) will appeal to a wide audience, but are definitely not my cup of tea. Salsa tortures my eardrums. Tango feels like nails on a chalkboard. The latin music soundtrack was frankly difficult for me to sit through. I judge Encanto positively for its artistic merits and effort to teach children about the plight of refugees. It would be disingenuous to not share an honest reaction to the soundtrack.

Encanto’s best aspect is the remarkable animation. Every scene in the film looks incredible. The Madrigal’s enchanted hacienda is an eye-popping marvel. Each family member has a room that displays their particular power. You can see where the filmmakers spent their budget. The CGI effects in several of the action scenes are next level. I look forward to watching Encanto again with the music muted. Encanto is produced by Walt Disney Animation Studios. It will have an exclusive theatrical release on November 24th from Walt Disney Studios Motion Pictures.

While the idea of Mark Ruffalo playing Hulk in the MCU was initially dismissed, The X-Files’ David Duchovny almost beat Ed Norton to the role.

What time are the 2022 Grammy nominations and how to watch