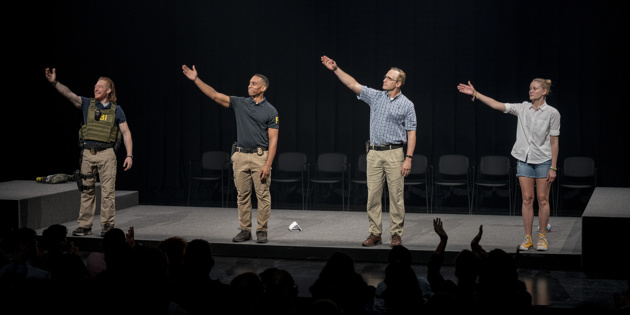 Broadway audiences can now experience the thrilling true story of Reality Winner in Tina Satter’s Is This A Room, which officially opened at the Lyceum Theatre on October 11. Starring Emily Davis, reprising her award-winning performance as Reality Winner, the play itells the story of the 25-year-old former Air Force linguist who was surprised at her home by the FBI on June 3, 2017. The production’s text is taken verbatim from the FBI transcript of the interrogation between Reality and the agents who question her. The piece first premiered at off-Broadway’s Vineyard Theatre in December 2019. Joining Davis on stage is Becca Blackwell as Unknown Male, Will Cobbs as Agent Taylor and Pete Simpson as Agent Garrick. As previously announced, Is This A Room is playing in repertory with Lucas Hnath’s Dana H. Celebrate the play’s opening night with these photos.

Did You Know? Tanuj Mahashabde aka Iyer Once Got Badly Injured While Performing Stunt