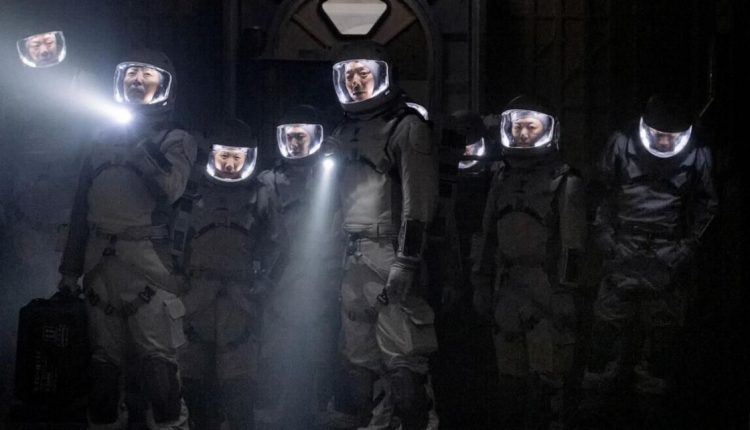 These people think they’re safe. They’re inside, where air is shared and mingles. Miniscule airborne particles travel the vents, spreading through the ducts in a gaseous hush before reaching an enclosed space where groups of people unknowingly breathe them in. The disease traveling in unseen droplets doesn’t reveal itself until it’s too late, at which point all that people can do is hope for the best but wait for the worst.

Watching this simple sequence of events becomes even more eerily terrifying thanks to the Coronavirus pandemic and its years of mask-wearing, breath-holding, hand-sanitizing anxiety; when it’s depicted in The Silent Sea, the audience reaction is palpably grim. There are several similar points of reference, but that’s the thing about the new Netflix show– people have seen this story and these events play out before, and yet they take on a new, bleak meaning in 2022.

Freak Out in a Moonage Daydream

The South Korean science-fiction drama taps into a variety of existential anxieties which have been consuming culture as of late. The Silent Sea doesn’t reinvent the wheel (or the moonbase), but it builds on so many prevalent elements of contemporary fears that it spins the wheel and sends it racing off a jagged edge. Mistrust of the government, climate-related catastrophe, corporate malfeasance, social inequality, invisible disease, and panicked conspiracies– all this nightmare fuel has powered humanity’s engines of collective anxiety for a few years now and drives this Korean drama through a relevant journey of white-knuckled tension.

As mentioned, the eight-episode first season of The Silent Sea piggybacks on many classic sci-fi tropes but does so in a fresh and exhilarating way. There is the assemblage of an elite team being sent to space during a disastrous time for the planet; the group (of predictably archetypal characters) is tasked by the government to recover something precious left over at an unresponsive space base, but lies and secrecy shroud their mission. Of course, the mission is emotionally personal for the protagonists with the most amount of screen time, and obviously, everything starts to go wrong, with the astronaut crew encountering some thing(s) that kill them off one by one.

Yet, this new series has a 100% Rotten Tomatoes score from critics for good reasons, having become something more than the sum of its simple, referential parts. It opens with an immediate sense of danger and chaos, the spaceship having crash-landed a short while away from the Balhae Lunar Research Station it was intended to reach. The characters greet the audience in a state of confused shock and pained nervousness, a perfect introduction for a series that subsequently follows them through ever-increasing anxiety over a very short period of time.

Related: All of Us are Dead: Everything We Know About Upcoming Korean Netflix Series

Though the contemporary action is strictly lunar, the show flashes back to before the mission in every episode, slowly teasing out character motivations and narrative mysteries. The situation in The Silent Sea is darkly portentous, detailing an overheated world where resources (especially water) are running out and citizens rely on sociopolitical and economic status to survive in the fashion of credit card-like transactions. The elitist higher-ups carry coveted gold cards, ensuring that the tap is always on for them, but most aren’t so lucky with the flow of their water supply.

Astrobiologist Doctor Song Ji-an is one such VIP, though not for the same reasons as government officials and the business elite. Doctor Song’s sister died in the ‘accident’ on the Balhae moonbase, and the government has expressed their condolences with a shiny gold card. Song believes that there is more to the story than a simple ‘radiation leak,’ thanks to some encrypted and secretive documents of her sister’s. It’s clear that there are deeply personal and perhaps political reasons (as if the two can ever be separated) for the astrobiologist to take the treacherous trip, but Song plays her cards very close to the chest. She doesn’t let her fellow space travelers understand much about her, and she does the same with the audience.

Song is a fascinating character, beginning the show already in a depression and carrying a quiet but hulking burden with her wherever she goes. Doona Bae plays the part perfectly, proving why she’s one of the best South Korean actors working today. She’s been beloved by Bong Joon-ho, who helped her craft wonderful performances in Barking Dogs Never Bite and The Host, and has been a favorite of the Wachowski sisters, who have tapped into her particular brand of cool (first expressed as a hip anarchist in Sympathy for Mr. Vengeance) with their projects Sense8, Jupiter Ascending, and Cloud Atlas (where she plays five parts excellently). She brings her deadpan cool to The Silent Sea as well but infuses it with a deeper melancholy and grief than usual, and the result is captivating.

Another excellent performance comes from Yoo Gong, who became a reliably talented presence in 2000s-era South Korean television before breaking through internationally with gripping, utterly committed performances in Train to Busan and Squid Game. He’s one of many South Korean actors currently garnering a lot of attention in North America, indicative of a new trend that sees Western culture embracing Korean drama. While the non-English films of Park Chan-wook and the aforementioned Bong Joon-ho have certainly received critical praise in the west over the past two decades, this developing trend hadn’t fully taken off until fairly recently.

Credit it, perhaps, with Parasite winning not just the Academy Awards for Best International Feature and Best Director in 2020, but also for Best Picture, becoming the first non-English language film to do so in the 92-year history of the awards at the time. This prompted Hollywood producer Janet Yang to tell TIME magazine, “This is a huge breaking of a psychological barrier. This wall we’ve built, in which non-English language movies were limited not just in release or box office but in people’s minds, is being cracked.” Since then, Youn Yuh-jung became the first Korean actor to win an Academy Award, for the Best Picture-nominated Minari. Her acceptance speech went viral and was simply joy-inducing.

Then, of course, there’s Squid Game, perhaps the most-talked-about television series of the past two years, though it’s certainly not the only one to be garnering a ton of American viewership and acclaim. From Kingdom to the eagerly awaited All of Us are Dead, Korean zombie television is becoming extremely popular; Korean romantic TV is blossoming, with Single’s Inferno becoming the first South Korean show to hit Netflix’s top ten most-watched series, globally. Hellbound, Sweet Home, My Name, and the upcoming Money Heist are all being talked about. With Netflix providing dubbed versions of these shows in a variety of languages, and the same linguistic variation with subtitles, it seems as if the barrier between ‘international’ and ‘national’ is becoming blurred. With these demarcating lines vanishing, a fascinating cultural dialogue is taking place between American and Korean media.

The Silent Sea quietly entered the conversation, perhaps overshadowed by bigger, adjacent releases like the popular fantasy adaptation The Witcher or breezy romance Emily in Paris, but standing out with its perfect Rotten Tomatoes score and glowing reviews. The initial episode is undoubtedly the worst of the eight, which is a shame; it’s not exactly bad, but it doesn’t prepare the audience for just how good the series gets. The CGI and visual effects actually seem to improve, going from the look of a mid-2000s video game in the first and second episodes to actually realistic and often stunningly awesome images. Halfway through the third episode, in what should become infamously known as the ‘water-vomit’ scene, audiences may realize that they’ve been hooked, caught up in this new thing about old things, infected with its contagious drama.

Room to Breathe (But Don’t)

Creator and director Choi Hang-Yong makes a bold choice to turn his 2014 short film The Sea of Tranquility (referring to the lunar ‘Mare Tranquillitatis,’ the very first off-planet location humanity has ever landed on) into a full television series. Going from 37 minutes to roughly seven hours is a big leap, and is often unwarranted when the show is beginning, with more footage of walking through hallways than an Aaron Sorkin drama. However, it turns out to be a wise choice over time, giving room for the characters to come into themselves and for the tension to ratchet up. What begins as a glacially paced mystery becomes an all-out thriller halfway through, and hardly lets up whatsoever. Viewers may find themselves unwittingly holding their breaths, the way the characters sometimes due to avoid infection.

Well-acted, often beautifully shot, with excellently tense music and disturbingly relevant themes, The Silent Sea is worth watching past its first episode in order to glimpse sci-fi achieving some of its full potential. Instead of being worn down by its well-trodden tropes and familiar plot mechanics, the series utilizes these things to make something urgent, dramatic, and timely, slowly perfecting the standard stories in the process. This is a great series for a fascinating cultural moment, one in which people both stay inside their homes and away from the silent attacks of disease, but also somehow engage in a productive cultural dialogue with nations and people across the world. The Silent Sea continues the dialogue and deserves to be heard.

The 2000s was a golden era for South Korean cinema. Here are the best movies of that decade.

Vicente Fernández might get an L.A. street named after him