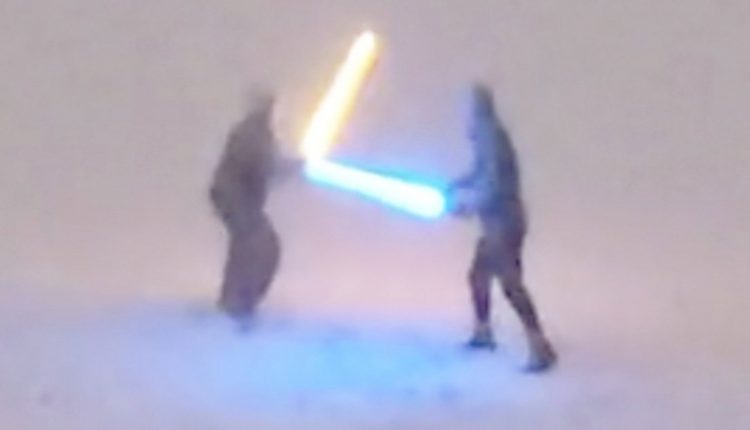 Lightsaber fights have been a part of Star Wars ever since George Lucas introduced us to a galaxy far, far away back in 1977. From the moment Obi-Wan Kenobi and Darth Vader dueled on the Death Star, these weapons were cemented as one of the most emblematic elements of the franchise. More than that, they have become a true staple of pop culture. So, it’s not too surprising when a couple of fans decided to break out their lightsabers and duke it out for fun. It is, however, a bit more surprising, and arguably entertaining, when that happens in the snow.

A video was recently posted to Facebook by Anghelie Elizabeth. It features two people dueling with their lightsabers in the middle of a snowstorm in Colorado. One of them is rocking a yellow/orange blade, not unlike the one Rey is seen with at the end of The Rise of Skywalker. The other is brandishing a blue saber, much like Anakin/Luke Skywalker’s. And, not for nothing, their skills are impressive. Most impressive. Elizabeth shared the video with the following caption.

“Only in Colorado can I stand on my balcony and see two men fighting with lightsabers, in 30-degree weather while it’s snowing outside.”

The video, perhaps not intentionally, brings to mind the climactic battle from The Force Awakens. As fans may well recall, Rey and Finn were attempting to get back to the Millenium Falcon after Han Solo was murdered by Kylo Ren, aka Ben Solo, his son. Kylo then confronts them on the way, resulting in a lightsaber battle, at first between Finn and Kylo. Then Rey stepped up to take Kylo down. This duel also happened in the snow, which is why the video may bring The Force Awakens to mind.

As for when we might get to see a lightsaber battle once again in an official capacity? The Mandalorian season 2 featured the weapon of choice for the Jedi, though not actual saber-on-saber action. Ahsoka Tano, specifically, showcased her lightsaber skills, and Moff Gideon brandished the Darksaber. But Lucasfilm has a ton of new Star Wars shows coming down the pipeline, starting with The Book of Boba Fett in December. We also have Andor, Obi-Wan Kenobi, The Acolyte, Ahsoka and more on the way. Even though The Rise of Skywalker concluded the Skywalker saga, it’s safe to say we will have plenty of opportunity to see more lightsaber fights in the future. Not just on Disney+ either.

Despite the shift in focus to streaming, in large part due to the success of The Mandalorian, Disney and Lucasfilm will bring Star Wars back to the big screen. Several movies are in development currently, including Rogue Squadron from director Patty Jenkins (Wonder Woman 1984). Taika Waititi, of Thor: Ragnarok and Jojo Rabbit fame, is also developing a mystery Star Wars movie.