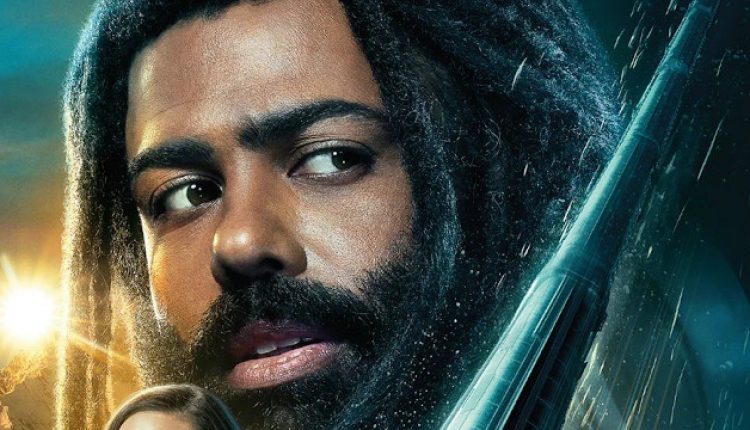 There’s something to be said of the timing of Snowpiercer, TNT’s original prequel-series of sorts to Bong Joon-ho’s hit 2013 film of the same name, both of which are, in turn, based on the 1982 French graphic novel Le Transperceneige. The post-apocalyptic drama—whose third season premieres in the US on TNT on January 24, 2022 and on Netflix on January 25, 2022, internationally—imagines a world entirely frozen over in the year 2026. All that’s left of the world are the thousands of lives aboard the eponymous Snowpiercer, a luxury train that, moving perpetually around the globe, was designed to sustain itself and its passengers through its constant motion. Of course, the “luxury” that Snowpiercer offers isn’t necessarily the same for all of its passengers: those closer to the front of the 1001-carriage train have access to more (and better) resources than those in the back.

For Daveed Diggs, who plays the series’ lead Andre Layton (a former detective who begins the series at the tail-end of the train and is reluctantly roped into a murder investigation), Snowpiercer is nothing short of exciting. “It’s wild that we’re still doing this thing. We’re [already] gearing up to go shoot a fourth season. It’s cool to have season 3 coming out and already know that we’re going back, and I get to see all of my friends,” Diggs says in our interview.

Indeed, Snowpiercer‘s development was first announced in 2015, but it wasn’t until 2018 that TNT officially ordered the series. After that, the TV adaptation experienced production issues, which pushed its original 2019 release date to May 2020. While these early reports seemingly painted a doomed picture for Snowpiercer, it all worked in its favor: 2020 was a historic year for the world, after all, from the COVID-19 pandemic to George Floyd’s murder inciting global movements and conversations around systemic, anti-Black racism to cultural shifts in the workplace (as a result of lockdowns and public health safety) that exposed economic inequities and the frailties of socio-political infrastructures. It’s these themes of global suffering, climate devastation, social injustice, economic inequities, and the corollary revolution (even warfare) that make Snowpiercer‘s timing particularly significant. The series’ depiction of destruction churning revolution echoed real-world calls and protests for change, which might not have so easily been the case had the series premiered as planned in 2019.

On Expanding the Snowpiercer Legacy

Of course, the Snowpiercer story was always meant to be a visual epic with an underlying social critique. Digg’s Snowpiercer takes cues from the world previously established by Bong in his 2013 film and by French publisher Casterman’s original 1982 graphic novel, while ultimately adding its own individual perspective to the franchise. “I was aware pretty early on that the show was doing something different, was taking the world that was so brilliantly set up in both of those iterations, and then tried to do a different thing,” says Diggs. “I think the only way we were able to make this [was to] sort of free ourselves of that and be like, ‘We love this, and thank you for the world,’ and now we’re going to try [something different].”

Part of what makes TNT’s Snowpiercer different is that imagines the Snowpiercer train prior to Snowpiercer (2013). Set 6 years prior to the events of the movie, Snowpiercer presents a different cast of characters led by Diggs and Jennifer Connelly (who plays Melanie Cavill, the Head of Hospitality with a curious fascination for the train’s lower-class passengers). Layton and Melanie start off at odds with each other but eventually come together on the same side of the revolution. “We’ve been trying [to do something different] for a while,” Diggs says, referencing the series’ season 3 premiere. “Hopefully, it’s not the destroying the legacy for anyone. But, also, I think it pretty quickly situated itself as a different version of the Snowpiercer universe, where the rules are similar but different, and where we’re sort of exploring similar themes but in a different way. Hopefully, that feels true to most people.”

On What to Expect From Layton in Season 3

“His idealism continues to be challenged, and I think he slips away from it more in season 3 than he ever has before,” says Diggs of what he was most excited to explore about Layton in the upcoming season. Layton started the series as a more reclusive character, keeping to himself and his cage of rats in the Tail. It isn’t until Melanie deputizes him as the Train Detective—to investigate a string of murders happening on the train—that Layton is reluctantly pulled from his private corner. Through his investigation of the murders, Layton uncovers a plot that endangers the lives of everyone aboard the train. As such, he uses his gathered knowledge to incite a revolution that ends successfully (though not without bloodshed). Melanie grants Layton leadership of the train, and immediately plans to institute a sort of democracy. He is, of course, interrupted by Mr. Wilford (Sean Bean), the eccentric billionaire responsible for Snowpiercer’s creation. By the end of season 2, Layton escapes from Mr. Wilford in a pirate train that he created out of Snowpiercer’s first ten cars, taking with him a team of his and Melanie’s most trusted people.

“For me, a big, interesting part of the journey was tying [Layton’s idealism] into impending fatherhood and what that does for him, and what suddenly having something more important to him than the train, than humanity in general, and having a human in particular who [he] cared more for—it’s hard for him to make choices for the greater good if they are not also for this one individual’s good. He hasn’t felt that before since being on the train.”

On Where He Finds Hope

The trailer for Snowpiercer‘s upcoming season 3 teases an actual destination for its passengers, one that is warm and seemingly habitable. It’s a promise of hope for its characters and, for audiences, a glimmer of a life after everything that’s going on. Indeed, at the risk of bordering on the profound, hope may sometimes feel like it’s in short supply these days. For Layton and Snowpiercer’s passengers, hope comes in the form of sunshine, warmth, and the idea of disembarking. For Diggs, hope is found in the people around him.

“Oh, always, always people. People that I know. The people in my community. In my various communities,” says the actor. “We are inundated with political news because there is always political news. Most argue [that] American democracy is not functioning too well. There’s always something to talk about there. And that directly relates to our experience in the pandemic, in the Trump era, in the, now, Biden era—all of these things are pendulum swings, and there’s plenty to report about. But what gives me hope is when I walk down the street and I have a conversation with my eccentric neighbor, or I go to a friend’s house, and we talk about what TV shows we like—people are still people. I believe that, ultimately, people are good. I think, at the bottom of it, we can get through all of these things. It’s frustrating to not have the help from the governments and leaderships that are promised when you’re born into a political system, but, at the end of the day, we could sort of look to each other and help each other out.”

Cate Blanchett is one of the greatest actresses of her time, and she recently explained why she turned down the chance to play a TV icon.