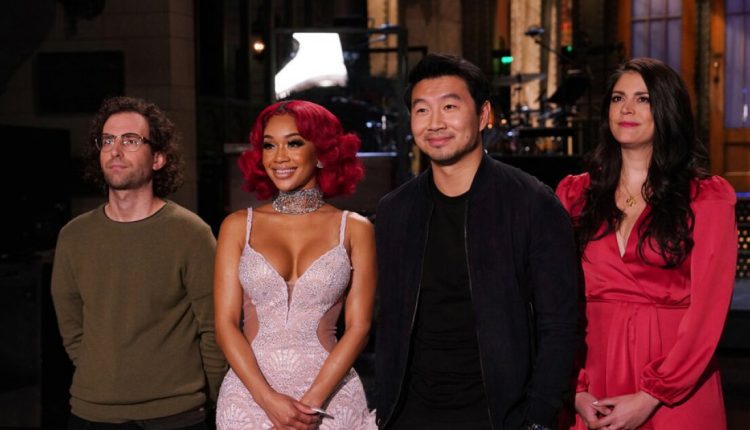 Marvel star Simu Liu returned to his comedy roots this weekend as the host of “Saturday Night Live.”

The “Shang-Chi and the Legend of the Ten Rings” actor and “Kim’s Convenience” alum introduced himself to the lively studio audience as “the first openly Chinese superhero” and the “first Chinese host on ‘SNL’… to be the fourth Chinese host on ‘SNL.’”

“A lot of people ask me how I landed a role in a Marvel movie,” the Chinese Canadian performer said during his opening monologue.

“The truth is, I got ‘Shang-Chi’ how every Canadian gets their big break: By asking politely. … I tweeted, ‘Hey, Marvel, … how about an Asian superhero?’ … And five years later, Marvel did make their first Asian superhero movie. And after I got the part, I went online and tweeted, ‘Thanks for getting back to me.’ Clearly, I’m Canadian.”

Liu headlined this weekend’s installment of “SNL” opposite musical guest Saweetie, who delivered a dynamic performance of her latest single, “Icy Chain,” as well as a crowd-pleasing mashup of her hit Doja Cat collab “Best Friend” and viral TikTok sensation “Tap In.”

“I really can’t believe my life right now because 10 years ago, I actually had a job dressing up as Spider-Man for kids’ birthday parties,” Liu said at the top of the show. “I’ll never forget this one birthday boy. His name was Trevor, and … let’s just say he was a real Trevor — kicking my shins and screaming, ‘You’re not Spider-Man!’

“I don’t know if you’ve ever been kicked by a 7-year-old while wearing a $30 Walmart Spider-Man suit, but it will break you. It will break your spirit. But it also lit a fire under me. And I don’t know where he is now, but Trevor, if you’re watching, I just want to say you were right. I’m not Spider-Man. I’m Shang-Chi, b—.”

Here’s a sampling of other standout moments from Saturday’s episode.

After Kyle Rittenhouse — who shot and killed two people amid Black Lives Matter protests in Kenosha, Wis. — was acquitted Friday of all charges, “SNL” cast member Cecily Strong’s Jeanine Pirro praised Rittenhouse during the show’s cold open for “doing the bravest thing any American can do: protecting an empty used-car lot in someone else’s town.”

The conservative TV host then welcomed her first guest, Kenosha County Circuit Judge Bruce Schroeder (Mikey Day), who was widely criticized during the Rittenhouse trial for appearing to sympathize with the defendant.

“He’s as impartial as a dance mom clapping harder than anyone,” Strong’s Pirro said while introducing Day’s Schroeder. “You ruled that courtroom with an iron fist. Tell us how you did it.”

“I ordered that the prosecution not use the word ‘victims,’” the judge explained. “They were rioters. And they weren’t ‘shot.’ They were ‘ga-doinked.’ But that did not give my client an unfair advantage in any way.”

Asked if he meant to say “the defendant” instead of “my client,” Day’s Schroeder chuckled and said, “Oh, yeah. Sure.”

One of the most popular sketches of the night saw Marvel’s first leading superhero of Asian descent square off against the “first fully Asian cast member on ‘SNL’” for a sort of “first Asian” olympics.

“Just remember, Simu,” Yang said in a menacing tone. “Whatever first thing you do, I’ll always be gay.”

“Republican or Not,” hosted by go-to “SNL” game-show host Kenan Thompson, challenged Liu and cast member Ego Nwodim to correctly guess the political leanings of various individuals based on a number of deceptively simple statements that spurred more questions than answers.

After Brady declared his respect for “pro athletes who stand up for their beliefs,” Liu and Nwodim exasperatedly asked, “Which athletes?” and “Which beliefs?”

Laughing quietly to himself, Thompson taunted, “Not so easy, is it?”

A digital short parodying a holiday Target commercial expertly identified just about every type of personality at the Thanksgiving dinner table, from “your niece’s annoying new boyfriend” to “the uncle who takes the [backyard football] game too seriously.”

At one point in the show, “SNL” ran a title card paying tribute to the late Peter Aykroyd, former “SNL” cast member and brother of comedian Dan Aykroyd.