Sara Mitich on her Sci-Fi Mystery Control, Loves the ‘Gritty, the Dark, and the Human’ 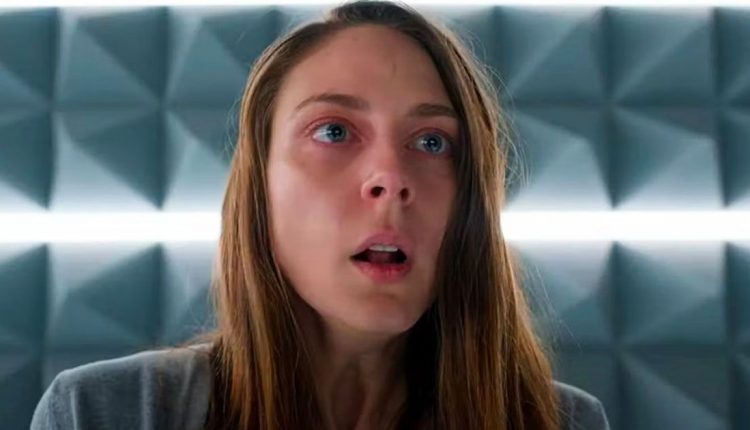 Eileen wakes up locked in a room she doesn’t recognize and chained to a chair that’s bolted to the floor. Her memory is almost entirely erased. In front of her is a table, also bolted to the floor, with a single pencil sitting on top of it. “Move the pencil,” says a voice on the intercom. She completes the challenge and is jolted back to sleep.

These challenges become increasingly difficult, but Eileen must do whatever it takes to complete them as the voice on the intercom is threatening to kill her daughter if she refuses. After a few rounds of completing the challenges and being knocked in and out of sleep, her husband Roger appears in the room, also unsure of how he arrived. They work together to complete more challenges, eventually unlocking Eileen’s telekinetic abilities, all while memories between the characters unfold.

Control is a sci-fi mystery worth engaging to the very end. It stars Sara Mitich as Eileen, George Tchortov as Roger, and Evie Loiselle as their daughter Eve. It’s directed by James Mark who co-wrote the film with Matthew Nayman.

“My career has kind of turned into a beautiful sci-fi darling of sorts,” commented Mitich who joined us to talk about the film ahead of its theatrical release on September 23, followed by its release on demand and digital on September 27. “I love it. The fan base of the sci-fi genre is incredible,” she continued.

Sarah Mitich as Eileen in Control

“I love the gritty, the dark, and the human,” shared Mitich, “and from the first pass of reading this, I got all of that. Even though it’s sci-fi and very much a genre film, you still have that humanity, and that’s definitely the first thing that made me want to dive in.”

That humanity Mitich mentioned refers to the core motivation of her character, being the desperation to save her daughter.

“I think it comes down to unconditional love,” she explained, “I don’t have children of my own, but I understand the concept of unconditional love in my life, or just having people that you would do anything for. People who inspire you to be completely selfless and to fight for what is right, to fight for that justice, and especially when it’s your child, I think a mother’s instinct is to protect.”

My process as an actor is a blend of imagination, substitution, and personalization. I’ve spent many years learning my instrument that I call my body. I know where grief lives in me, I know where joy lives in me… it’s blending that with the stakes in the circumstances of the script… for me, it’s about getting really specific about what that is, and who that is, and then living that as it’s happening.

Additional to the humanity present in the film is Eileen’s ability to practice her telekinetic powers through a series of challenges. In one of these challenges, we can see her putting together a handgun, eventually used to escalate character exposition.

“I love the gun scene… I think it’s a massive shift for both characters, for George’s character and mine… It’s really when the turn starts to happen. If you watch the development of her character, she locks into a certain stillness in that scene, and that stillness stays throughout the second half,” said Mitich.

“He’s so amazing,” said Mitich when asked about what it was like to work with Tchortov. “He’s so generous… George comes so prepared, so ready with opinions, thoughts, ideas, and he just likes to play. A lot of the distance is just the two of us, and we were blessed with being able to shoot it in chronological order. It kind of took me back to my theater days because we got to develop this relationship, and develop these characters chronologically, which doesn’t happen often in this industry. So, I can’t say enough good things about George.”

Mitich echoed similar sentiments when asked about Mark, commenting that he was collaborative from the very start and available to go through any questions and thoughts she had about her character. “He was there for everybody. He truly was the glue,” said Mitich.

Related: Exclusive: Sophie Lowe on the Making of Medieval and Working with a Stellar Cast

The Mystery of Control & Potential for a Sequel

Throughout Control, we see plenty of character development and receive some answers as to why Eileen is locked in a room and forced to complete challenges, though we are left with some levels of ambiguity. The Administrator — the voice heard over the intercom that directs Eileen — is left with some space for interpretation that could potentially lead to a sequel.

“It’s the one thing I never really thought of until after and seeing the movie,” commented Mitich, “Who is this? Is this government? Is this something else? Is this the enemy? And my answer to that is that I’ve absolutely no idea, and I hope that James somehow, whether it’s a sequel, can give us more about that.”

“I think the beauty of this movie… I like it when it starts making the audience think. When it’s not just, you know, everything wrapped up in a bow,” continued Mitich, “how many of these rooms are there? Who’s running the facility? Are we the good guys or the bad guys? There’s a lot of different directions that it can go.”

Control comes to us from Saban Films.