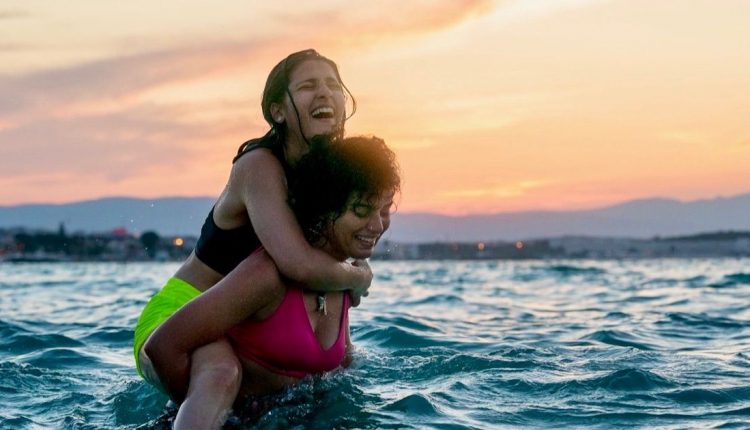 It’s not every day that one is asked for permission to turn their life story into a movie, but that is the case with Olympic swimmer Yusra Mardini and her sister Sara in Netflix’s latest film The Swimmers. It, of course, helps that theirs is a story of extraordinary strength, perseverance, and hope, one that begins in war-torn Syria, involves the harrowing experience of crossing the Aegean Sea in a boat that breaks down part-way through, continues in a cross-continent journey on-foot from Greece to Germany, and ends at the 2016 Summer Olympics in Rio de Janeiro.

“I started sharing my story even before I was at the Olympics,” Mardini said in our interview ahead of the film’s premiere, when asked about what inspired her to agree to The Swimmers‘ adaptation of her and her sister’s experience. She detailed her exchanges with a European journalist who had interviewed and followed her group from Serbia to Germany and credited this as a turning point for her in terms of discovering her own voice. “Saying yes to the movie was really important because [it’s] a success story for refugees, and that’s not something you hear every day.”

Sally El-Hosaini on Feeling Called to Direct The Swimmers

The Swimmers was one of many films that made its world premiere at the Toronto International Film Festival earlier this year. More than that, the movie had the coveted honor of being the festival’s opening night gala film (per IndieWire). It wasn’t the first time a Netflix title or a sports-related drama kicked off the festival — Outlaw King and Borg/McEnroe are some recent examples — but The Swimmers is one of the few refugee stories to hold that spot, a salient choice by TIFF considering Toronto’s own history of being a largely welcoming city to refugees.

Related: The Swimmers: Plot, Cast, Release Date, and Everything Else We Know

While at the festival, director Sally El-Hosaini revealed to The Hollywood Reporter that she essentially dropped everything she was working on to commit to The Swimmers. When asked in our interview to expand on her feeling called to direct the Mardini sisters’ story, she said, “I grew up in Egypt, and [their sisterhood] reminded me of me and my friends growing up. The opportunity to put young, modern, liberal Arab women on-screen to celebrate them with all their ambition was exciting to me because, normally, you don’t get that narrative.”

Playing Coach Sven Spannekrebs, Matthias Schweighöfer doesn’t appear in The Swimmers until a little more than halfway through the film, but his impact despite minimal screen time is undeniable. “It was important for Sally because there’s so much going on in the film that when Sven comes in, it’s about feeling safe and having a future and being kind, more Zen, in-rhythm, and focused,” he said. “Sally had a great vision. I fought that vision, and she said, ‘Trust me, Matthias. You’re not in control, you’re acting, and I will guide you through these different scenes.’ And she did a great job, and a great film.”

Related: These Are Movies About Sisters We Can’t Live Without

In preparation for his role, Schweighöfer met with the real-life Coach Sven (who would become Mardini’s Olympic coach), who took him on a tour of the pool and neighborhood that the Mardini sisters lived in and trained at after arriving in Germany. “He showed me all these clips of the girls [having fun], feeling free, growing up, and doing the work.” What perhaps struck Schweighöfer the most about Spannekrebs was his sheer selflessness, which is something The Swimmers effectively underscores. “Sven really wanted to help. No ego. He gave these two young girls everything he had because he wanted to be part of their life, their hopes, and their dreams.”

Yusra Mardini on Watching The Swimmers for the First Time

“It was really emotional for us,” Mardini said of the first time she and her sister watched The Swimmers in its entirety. They, along with El-Hosaini, Spannekrebs, and Eric Fellner, the producer, were all sitting in a private theater together, exchanging meaningful glances with each other, laughing, and crying. “You don’t wake up every day and think about everything you went through in life. To watch what we’ve been through and where we are today, it made us feel proud. It made us connect again, me and my sister, because when we got to Germany, she went back to Lesbos to volunteer, and I went to a different city.”

In The Swimmers, the Mardini sisters are played by real-life sisters Nathalie and Manal Issa. While it’s not uncommon for actors to share the screen with siblings, El-Hosaini revealed that this happened by chance. “I had seen Manal in some independent Lebanese films, and it was when she was auditioning, and we were talking about sisterhood, that she mentioned Nathalie, who wasn’t an actress.” The younger Issa sister took some convincing to audition, but, once she agreed and they did a screen test, “the chemistry was just so undeniable” for El-Hosaini that “it was a no-brainer” to cast both.

Indeed, sisterhood remains the heart of The Swimmers. “That was the most important thing because, ultimately, that’s the way into the story for most people. That’s the story we all relate to on an emotional level,” said El-Hosaini. “When you talk about refugees, it’s very easy to think of them as ‘other.’ I didn’t want this film to be an outsider observing.” What’s, of course, remarkable is that this sentiment was even felt by Mardini, despite it being her own story. After their private screening of the film, Mardini said that she and her sister embraced El-Hosaini. “We said thank-you for reminding us of our relationship.”

The Swimmers is now available to stream on Netflix.

Odds & Ends: Brandy to Return to the Role of Cinderella | Srtalent

Bhediya Result Of Koimoi ‘How’s The Hype?’ Out! It’s A Good Response For Varun Dhawan Led Film But Definitely Not A ‘Thumka’ Time Thanks To Drishyam 2 Fever