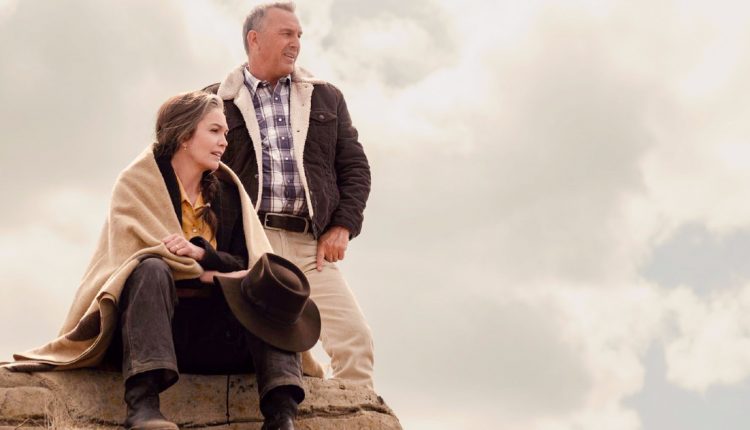 Rival grandmothers fight for the custody of their grandson in a slow-burn, neo-western thriller. Let Him Go builds simmering tension until an explosion of graphic violence. The film takes the time to establish serious character depth before throwing its leads off the deep end. The pacing gets a bit sluggish, but revs up for the brutal climax. The period setting’s desolate landscapes add to the foreboding narrative.

Let Him Go opens at a ranch in early sixties Montana. George Blackledge (Kevin Costner), a retired sheriff, and his wife, Margaret (Diane Lane), watch as their son (Ryan Bruce) rides a new horse to a local trail. The horse returns, but he does not. George and Margaret are left caring for his widow, Lorna (Kayli Carter), and their infant grandson.

Three years later, Lorna marries the arrogant and disrespectful Donnie Weboy (Will Brittain). Margaret dislikes him immensely, but the reserved George wants to give him a chance. Margaret witnesses Donnie’s despicable behavior on the street. She visits their apartment to talk to Lorna, but they have left hurriedly.

Margaret resolves to find them and take her grandson back. George is reticent, but supports his wife always. Their investigation into Donnie’s whereabouts reveals startling information. His family, the Weboy’s, have a notorious reputation. They are directed to the family’s home in North Dakota, but are warned to be careful. The Weboy matriarch, Blanche (Lesley Manville), is fiercely protective of her family as well.

Let Him Go is adapted from the novel by Larry Watson. Writer/director Thomas Bezucha (Big Eden, The Family Stone) preserves the stark conflict between two very different families. George and Margaret are left reeling after their first meeting with Blanche. They finally understand the source of Donnie’s appalling behavior. Conversely, Blanche is equally offended by the Blackledges nerve. How dare they come into her house, and make demands for a child she considers family. The battle between the clans rages against the wide-open landscape. There’s a haunting poetry to the long roads and rolling hills. Bezucha does a good job of creating atmosphere with his characters and locations.

Diane Lane and Lesley Manville are fantastic adversaries. Both are headstrong and resilient, but Manville is terrifying. She chews through her scenes like a tiger at a steak buffet. The female characters dominate this film. Kevin Costner says little throughout. His formidable screen presence adds weight without unnecessary dialogue. He represents the classic quiet, but deadly stoical hero of the western genre. Costner’s turn as George Blackledge is completely different from his role on the hit cable series, Yellowstone.

Let Him Go‘s final act will have detractors. A methodical approach to the plot by Thomas Bezucha veers sharply into blood and bullets. I appreciated the succinct resolve. A good western has to have a shootout. The film has its dramatic fill and delivers the needed action. The ending has a few surprises. Let Him Go is a production of the Mazur/Kaplan Company. It will be released theatrically by Focus Features on November 6th.

Mural honoring Eddie Van Halen to be unveiled in Hollywood