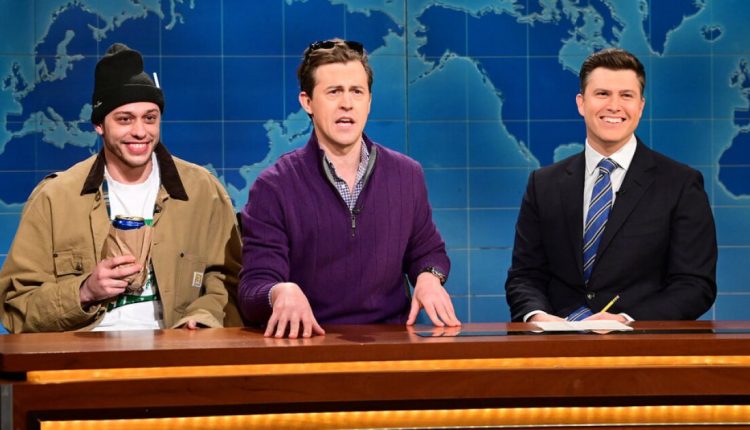 On Friday, the Associated Press reported that Jost and Davidson spent $280,100 on a decommissioned Staten Island Ferry boat, which they intend to transform into an entertainment venue. The “Weekend Update” writers wasted no time mining their nautical plans for material.

“I’m getting some sort of message, like a flipper from another skipper. Yep, my tighty-whitey Spidey sense is tingling. Someone bought a boat! … Breaking news: My boy Coy Joy [Jost] and ‘SNL’ boy toy [Davidson] are saying ahoy hoy to an aquatic toy toy.”

Despite Jost’s chagrined protests, a shameless Davidson then joined the party to confirm he and his castmate had indeed invested in a ferry, “the windowless van of the sea.”

“It’s very exciting,” Jost added in a deadpan tone. “We thought the whole thing through.”

“Even the mayor tweeted about it,” Davidson said, “which is how I found out we have a new mayor?”

Davidson and Jost, both born and raised in the Staten Island borough of New York City, won a bidding war for the old commuter vessel with help from Paul Italia, a real estate investor and comedy club owner. Earlier this week, Italia told AP that the ferry remodel is still in “the early stages” and would likely cost millions of dollars to complete.

“We bought it with this guy Pauly Italia, which is the name of a real person and not a mafia-themed wrestler,” Davidson quipped. “We’re boat people now, Colin! I mean, you always were. You look like you own the yacht they rent out for rap videos.”

“We are having trouble finding a place to dock, though,” Jost added.

After news of Davidson and Jost’s ferry acquisition surfaced, many immediately made light on social media of the soon-to-be hot spot — which sounds like something Bill Hader’s Stefon would have plugged back in the day. (During Hader’s “SNL” tenure, Stefon was a popular “Weekend Update” character who gave disturbing recommendations for bizarre New York City attractions.)

“Have you heard of the hottest club in the city?” one person tweeted, Stefon-style. “It’s called ‘Tetanus’ and it’s located in the rusted belly of a decommissioned Staten Island ferry. You’ll dance the night away while also always being just moments away from drowning.”

“New York’s hottest club is FERRY,” tweeted another. “Built out of a decommissioned Titanic replica this Staten Island garbage barge has everything: twinks, minks, MY SON, and the original pizza rat, now offering used-needle-tattoos — Manhattan design at a Jersey price.”

How ‘Conversations With Friends’ on Hulu got endometriosis right