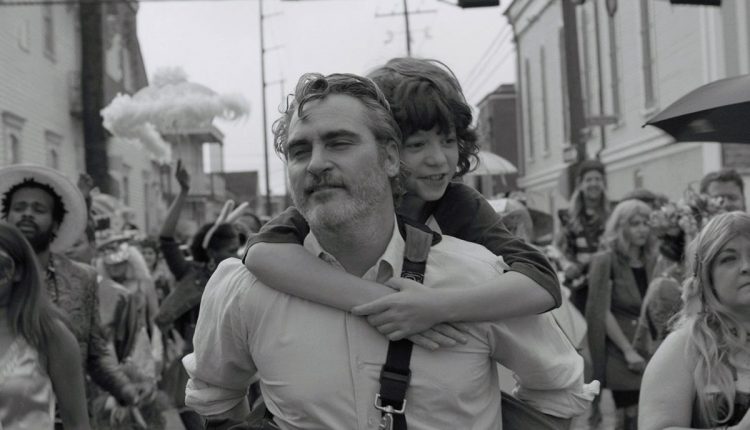 A radio journalist played by Joaquin Phoenix bonds with his nephew (Woody Norman) in C’mon C’mon.

Joaquin Phoenix continues to show formidable range with another daring and emotionally complex performance. C’mon C’mon is a black and white, arthouse drama about a radio journalist bonding with his troubled young nephew. Their relationship and larger family issues are juxtaposed against a docu-style subplot. Where children are interviewed about the future and their thoughts in general. This is all pretty heady stuff. C’mon C’mon is well-acted, but veers towards draining and tedious in the final act.

C’mon C’mon opens with Johnny (Joaquin Phoenix) at work in Detroit. He and a colleague are interviewing local children for their national radio show. He gets a call from Viv (Gaby Hoffmann), his frustrated and overwhelmed sister in Los Angeles. Her mentally unstable husband has left their house and needs urgent help. She asks Johnny to take care of her nine-year-old son, Jesse (Woody Norman).

Johnny is both amazed and perplexed by his nephew’s erratic behavior. Jesse’s mood swings wildly from adorable to problematic. He’s unable to process his parent’s separation and father’s illness. The situation becomes more involved when Johnny takes Jesse on the road. He struggles to find a breakthrough with the boy. But learns that help and wisdom are all around him.

C’mon C’mon uses Johnny’s recording equipment as a tool to express raw feelings openly. Johnny records his thoughts in addition to the children throughout the film. We’re always aware of his opinions. Joaquin Phoenix is superb in these solo asides. He’s incredible leading a younger actor. But it’s when he’s alone in a scene that truly stands out. Joaquin Phoenix sells the gravity of being responsible for a conflicted child.

The artistic intent works constructively with the subject matter. Films are rarely this realistic when dealing with mental health crises in families. The black and white cinematography adds both a stark and luminous touch. C’mon C’mon loses its grip when the resolve drags out. The character drama remains intense for too long. A faster diffusion of tension is needed. I became numb to Jesse’s antics, especially with the extraordinary leeway he’s given.

Old school parents will probably scoff at the level of nurturing. Jesse’s every whim is addressed like a red alert. The adults do a lot of unnecessary apologizing. A little discipline isn’t tyranny. Kids should be given choices and boundaries. C’mon C’mon is produced by Be Funny When You Can. It will have a theatrical release on November 19th from A24.

Salma Hayek is now a part of the Hollywood Walk of Fame and you can watch her induction ceremony.

When Adele cries, we cry: Watch her viral teacher reunion