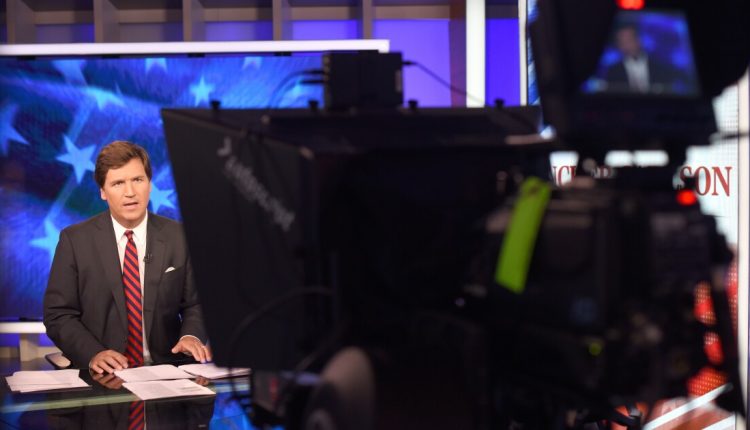 “What is hate speech? Well, it’s speech that our leaders hate.”

The hypocrisy was stunning, even by Tucker Carlson’s standards. During a broadcast of his show “Tucker Carlson Tonight” on Monday, the Fox News host blamed Saturday’s mass shooting of 13 people in a predominantly Black neighborhood of Buffalo, N.Y., by a radicalized white gunman on the policies of President Biden, the Democratic Party and pretty much anyone who‘s called for a stop to the hate speech and racist ideology espoused by the suspect — and Carlson himself.

Outcry that Carlson address his part in spreading a xenophobic philosophy known as the “great replacement theory” — a paranoid notion that white, Christian people are being intentionally replaced by people of color, Jews, Muslims and immigrants — was met during Monday’s telecast with no acknowledgement whatsoever of the role Carlson himself has played in energizing white nationalists, but plenty of moaning about who the real victims are in this tragedy: those in the right-wing media and Republican Party who were swiftly connected with the horrid ideas in the shooter’s apparent manifesto.

“You probably haven’t learned a lot about the people who were shot, beyond that they were Black,” Carlson said in the episode’s opening moments, after pointing out that there had been more than 100 deaths over the weekend in metro areas and that gun violence was “typical” in metro areas such as Los Angeles and Chicago. Then, as if uncovering a nefarious plot, he danced around the subject of why the killings in Buffalo received the most attention. Using pretzel logic, he blamed the liberal media for targeting the right with woke politics, thereby inspiring the rise of “white identity politics.” He didn’t mention gun control, of course, or present any new details about the victims of the Buffalo shooting he criticized the press for ignoring: The only person Carlson went on to name, and talk about at length, was the gunman.

Under the circumstances, with the nation reeling from both the general regularity of mass shootings and its plague of racially motivated ones, Carlson’s display may have constituted his lowest point yet — at least in terms of humanity (never to be confused with ratings). He turned the very tragedy he accused Democrats of politicizing into an argument the secondary targets of the Buffalo shooting are folks like him, who believe “All lives matter, period,” who “would like to see a return to the American way of life,” who would like to be judged “by the content of my character, not by the color of my skin.”

The moral contortionist act — replete with that craven allusion, without credit, to the Rev. Martin Luther King Jr. — would have almost been impressive if it weren’t so utterly depraved. Carlson has been ratcheting up the political tension for ages, especially since Biden assumed office, in ways that dovetail dangerously with the Buffalo shooter: “The Democratic Party is trying to replace the current electorate, the voters now casting ballots, with new people, more obedient voters from the Third World,” warned Carlson in April of last year. He suggested that no one should “sit back and take that.”

On Monday, speaking in a chilling monotone, he acted as if he’d never said such things. But a recent New York Times investigation into Carlson’s promotion of replacement theory found that in more than 400 episodes of his show, “Mr. Carlson has amplified the notion that Democratic politicians and other assorted elites want to force demographic change through immigration, and his producers sometimes scoured his show’s raw material from the same dark corners of the internet that the Buffalo suspect did.”

The phrase “great replacement theory” was coined in 2012 by the French nationalist, novelist and conspiracy theorist Renaud Camus. Far-right groups have used his musings (which are repurposed from at least a century of other racist screeds) to reframe old-fashioned hate in a new light. Mass shooters in both the Christchurch, New Zealand, mosque attack and the El Paso Walmart assault wrote about their belief in the theory. The white supremacists who marched in Charlottesville, Va., in 2017 chanted “Jews will not replace us” and “You will not replace us.”

In fact, whipping up fear of The Other, then pretending nothing happened, is Carlson’s sweet spot. He lost advertisers in 2018 when he said immigrants make “our own country poorer and dirtier and more divided.” In 2019, he said the notion of white supremacy is “a conspiracy theory used to divide the country and keep a hold on power.”

Rather than soften his message Monday, Carlson assured viewers that they should remain scared, because as sure as Biden would use the tragedy for political gain, he was also framing them as the enemy. Referring to a Politico report on Biden’s planned speech Tuesday in Buffalo (though not without first using the opportunity to ding Biden’s lowest-ever approval rating), he warned viewers that the White House had already decided those “who disagree with Joe Biden are an existential threat to the nation, like Al Qaeda or climate change. A threat so profound we must declare war on it to survive. This threat Biden is referring to is you. He’s talking about his fellow Americans. No president has ever spoken like this. Ever.”

The rest of the hour was devoted to nuclear war with Russia, our disappearing southern border, “unhinged” pro-choice protesters and less deadly matters of conspiracy theory. In a segment about UFO sightings, Carlson felt it imperative to inform his audience that government officials were feuding over how much the public should know.

The truth is out there, just don’t expect it from Carlson. Or any other sort of reckoning with reality, or the consequences his words have on this planet.

‘Only Murders’ Season 2: Shirley MacLaine was ‘a complete…