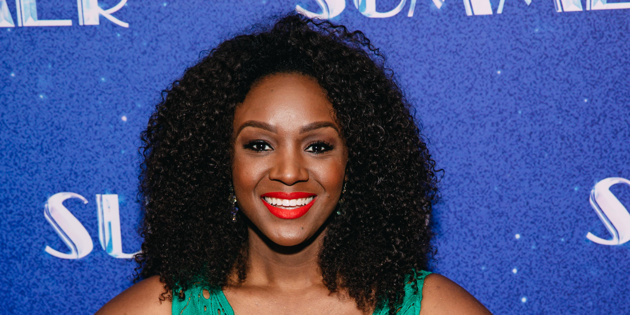 Saycon Sengbloh, who garnered a 2016 Tony nomination for her performance in Danai Gurira’s Eclipsed and will appear in the Jennifer Hudson-led Aretha Franklin biopic Respect, has landed an exciting new role. Deadline reports that Sengbloh will star in ABC’s upcoming pilot of The Wonder Years. The comedy comes from Dave executive producer Saladin Patterson, Empire co-creator Lee Daniels and the original series’ star Fred Savage. Written by Patterson and directed by Savage, the reboot will be set in the 1960s, the same era as the original, newly focusing on the Williamses, a Black middle class family in Montgomery, Alabama. Sengbloh is set to play mother, wife and full-time accountant Lillian Williams. Additional casting and a production schedule will be announced later.

Spot Cristin Milioti & More in the Trailer for Made for Love

Theater fans can soon enjoy seeing a trio of Tony nominees on their small screens. The trailer for HBO Max’s forthcoming series Made for Love is now available. Cristin Milioti and Billy Magnussen star as a couple in the show, which is scheduled for an April premiere. Plus, fans can spot Noma Dumezweni in the intriguing trailer. Check it out below!

Inaugural Ann Reinking Scholarship to Be Presented in November

The arts community outreach organization Off The Lane has announced the creation of the Ann Reinking Scholarship, the first of which will be presented this November, when the Broadway legend, who died in December, would have turned 72. Submissions for the $5,000 scholarship, which will be awarded annually to a young dancer moving to New York City to help them in their artistic endeavors, are scheduled to open up in May. The Advisory Board for the Ann Reinking Scholarship includes Dylis Croman, Charlotte d’Amboise, Joel Grey, Marilu Henner, Bebe Neuwirth, Chita Rivera, Tommy Tune, Reinking’s husband Peter Talbert, her son Chris Reinking Stuart and more.

This bootcamp is sure to be popular! Tony winner Kristin Chenoweth has announced her Broadway Bootcamp will take place virtually from June 6 through 13. Students completing grades eight to 12 in the 2020-2021 school year are eligible to participate. Last year’s live session was canceled due to the coronavirus pandemic. “Although things seem to be getting better, we knew we were stll facing the same challenges this summer, but I just couldn’t imagine skipping another year, so I gathered my team and presented the idea of doing it live and virtual, being able to promise that it would be unique, interactive and as satisfying as meeting up in person,” Chenoweth said in a statement. “It had to be special, particularly because many of these young people have been facing their computer screens during the school year and have already been confronting hurdles online. I dare say, I think we have achieved our goal for this year’s session.” This year’s camp will be led by Chenoweth and her camp co-directors Richard Jay-Alexander and John McDaniel. New faculty members for this year will include Kelli O’Hara, Sierra Boggess, Mandy Gonzalez, Norm Lewis and more. The week will consist of classes, panels, music sessions, dance classes, stagings and rehearsals from coaches and award-winning stars. The program will culminate in a show on June 13, marking the 2021 edition of The KRISTI Awards, opening with live red carpet coverage of students, performers and presenters by NY1’s Frank DiLella. Head here for more info on how to participate.