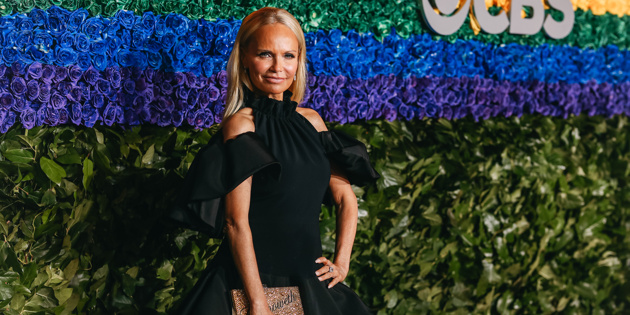 Kristin Chenoweth Offers Her Two Cents on a Wicked Cameo

Tony winner Kristin Chenoweth appeared on The Tonight Show With Jimmy Fallon to talk about her engagement, new holiday album and more. The Tony winner also told the story of first meeting Ariana Grande, who, as previously reported, will play Glinda, the role Chenoweth originated on Broadway, in the Wicked movie. Cheno also revealed an idea for her and original co-star Idina Menzel to make a cameo in the forthcoming film. Get the scoop below!

Jersey Boys original cast member Daniel Reichard is returning to the New York stage. On December 20 at 7PM ET, he’ll perform his new holiday concert Let’s Christmas at Birdland Jazz Club. Since 2006, Reichard has made his holiday concert an annual event, having played engagements at venues including Lincoln Center, Feinstein’s 54 Below, the Alvin Ailey Theatre and more. This year, he will present a one-night-only evening of stories and songs, including holiday hits from various decades. Head here for more info.

Situation, in collaboration with the Mayor’s Office of Media and Entertainment, will invite the next generation of change makers to peek behind the curtain of Broadway’s vast job market in a special, virtual “open house” for college students, recent grads, and aspiring young professionals on December 6. With the support of the City University of New York and the State University of New York, attendees from across the country will get access to a full day of online panels and conversations with theater industry experts, including producers, stage managers, technical directors, sound designers, physical therapists, makeup artists, merchandise managers, lawyers, accountants, playwrights, choreographers, talent agents and many more. “Whether you’re interested in design, technology, business, fashion, fitness, music, marketing or, yes, performance—Broadway needs your unique passion and talents,” Damian Bazadona, President of Situation Group and co-organizer of the event, said in a statement. Tickets for the livestream are free and available here.

Could Luna Make Her Broadway Debut in KPOP?

KPOP, The Broadway Musical may no longer have its previously announced pre-Broadway run at Washington, D.C.’s Signature Theatre, but the musical is “still on a firm trajectory to open on Broadway in the coming year.” People reports that Luna, a South Korean singer who recently released the popular single “Madonna,” could make her Broadway debut in the show. Luna, whose real name is Park Sun-young, debuted as a member of girl group f(x) in 2009. In 2016, she released Free Somebody, her first EP as a solo artist. Luna also has previous stage musical experience, having starred in Korean versions of Legally Blonde: The Musical, In the Heights and more.

The 24 Hour Plays have announced that they will host their 21st annual gala on December 11. Artists from Broadway, TV and film will come together to create brand new plays and musicals written, rehearsed and performed in 24 hours. For the first time, the event will feature The 24 Hour Plays, The 24 Hour Musicals and The 24 Hour Plays: Viral Monologues in a taped-to-live format. Guests may purchase a VIP ticket to join in-person watch parties in New York and Los Angeles or purchase a ticket to watch the livestream. Artists scheduled to participate include actors Midori Francis, Anna Chlumsky, Jessica Hecht, Merle Dandridge, Nia Vardalos, Susannah Perkins and more.

tick, tick…BOOM! is the gift that keeps on giving, and this performance is no exception. To celebrate the release of the film adaptation of Jonathan Larson’s musical, Netflix and director Lin-Manuel Miranda are shining a spotlight on emerging teen performers and filmmakers. Students from performing arts public high schools in Los Angeles, Baltimore, Chicago, Dallas and one youth theater in New York conceived and produced their own unique rendition of “Louder Than Words.” Check out the video below!

Watch the Trailer for Season 2 of ‘Euphoria’