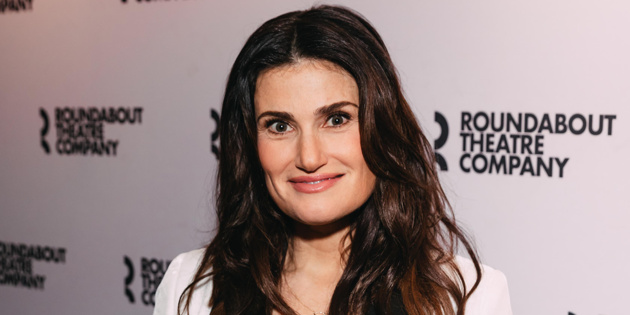 Idina Menzel Curates Broadway Playlist
Idina Menzel has performed some fan-favorite showstoppers throughout her career. Now the Tony winner has curated a playlist of some of her favorite 11 o’clock numbers, available now on Spotify. “Let me know your favorite track on the playlist!” Menzel wrote on Twitter. From Cynthia Erivo’s “I’m Here” to Billy Porter’s “Hold Me in Your Heart,” let the beltfest begin!

Florence Birdwell, who was a mentor to Tony winners Kristin Chenoweth and Kelli O’Hara, died on February 15 in Yukon, Oklahoma. Born on September 3, 1924 in Douglas, Arizona, Birdwell went on to receive a scholarship to Oklahoma City University (OCU), where she earned a Bachelor’s of Fine Arts in Voice in 1945. She later received a master’s degree in music in 1969, became assistant professor in 1976 and full professor in 1988. Her OCU teaching career spanned seven decades. She was inducted into the Oklahoma Higher Education Hall of Fame in 2012 and was awarded an Honorary Doctorate of Musical Arts by OCU in 2016. She is survived by her daughter Robyn, son Brian, grandchildren Hayden, Ned, Sophie, Colin, Fletcher, Thomas and Grace Kathryn as well as one great-grandson, Truman. In lieu of flowers, the family asks that donations be made to the Wanda L. Bass School of Music at OCU. Both Chenoweth and O’Hara offered loving tributes to Birdwell on social media.

Roundabout Theatre Company and Arts for All Abilities Consortium is presenting a virtual theater festival dedicated to the voices of artists with disabilities on April 8. The Reverb Theatre Arts Festival serves as a space for artists to develop and share new works, created and hosted by Roundabout Theatre Company with the participation of Actionplay, CO/LAB Theater Group, DreamStreet Theatre Company and EPIC Players. Artists from around the country have submitted original theater pieces, including monologue, spoken word, dance or music, based on creative prompts on the theme of “connection.” From that pool, the partner organizations chose 24 participating artists to develop their pieces and work alongside Roundabout’s collaborating artists over the next few weeks. The collaborating artists include Ali Stroker, Lauren Ridloff, Jamie Brewer, Lindsey Ferrentino and more. Learn more here.

The 2020 Kesselring Prize for playwriting, a $25,000 award given annually to an outstanding playwright deserving of national recognition, is to be presented to Mona Mansour by The National Arts Club during a virtual ceremony on February 25 at 6PM ET. This marks the 40th year of the Kesselring Prize—presented annually by the Club—and the evening will include a special look back at the history of the award, in addition to the tribute to Mansour. Under the direction of Michael Parva, longtime artistic drector of the Kesselring Prize, the evening will feature readings from Mansour’s plays, with a cast featuring Tala Ashe, Nadia Bowers, Deirdre O’Connell, Joshua Chessin-Yudin, Sarah Nina Hayon, Nadine Malouf, Corey Stoll and Hadi Tabbal. Register for the event here.

University of Montevallo to Name Theater in Memory of Rebecca Luker

The University of Montevallo, the graduate school in Alabama the late Rebecca Luker attended, has announced it will name the stage in its new Center for the Arts after the Broadway star who died on December 23, 2020. Luker was a vocal performance major and recipient of an honorary doctorate from the University. In addition to naming the theater, an anonymous donor has provided a $50,000 match to establish the Rebecca Luker Scholarship for University of Montevallo theater students. Click here for more information.

The African American Film Critics Association (AAFCA) will present Ma Rainey’s Black Bottom director George C. Wolfe with the Salute to Excellence at its upcoming awards ceremony on April 7. “For many actors, their pathway to success begins in the theater, and Mr. Wolfe has certainly been a part of the development process for a lot of big names that we know today in the TV and film space. He’s such a brilliant man and director … telling stories that reflect in it to a great degree our history in this country as Black people,” said AAFCA CEO and President Gil Robertson. The 12th annual AAFCA award nominations will be announced on March 8.

The Broadway League has chosen 42 students from public high schools across New York City to participate in its ninth annual High School Broadway Shadowing Program, which will take place online due to ongoing COVID-19 concerns. During their mid-winter break, the students will learn about non-performances careers in the arts. Speakers include Brian Moreland and Seth Sklar-Heyn, Eva Price and David Richards, Toni-Leslie James and Beowulf Boritt, Charlotte St. Martin and more. The students will be able to learn from those working on Come From Away, Jagged Little Pill and Six.

Liam Neeson again plays protector, and this time, it’s the Mexican cartel he’s out to destroy