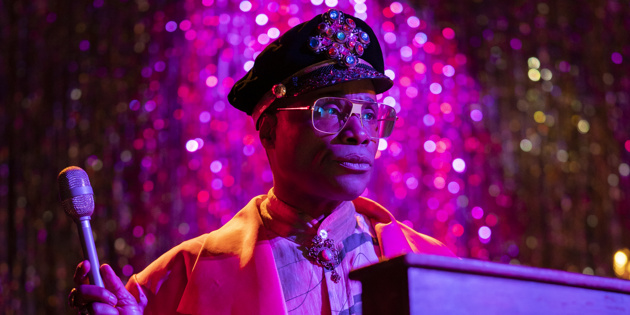 Pose‘s Third Season Will Be Its Last
Elektra Abundance will certainly have something to say about this! Season three of FX’s Pose, Ryan Murphy’s series about New York City’s underground ball culture starring Tony and Emmy winner Billy Porter and Mj Rodriguez, will be the final one. The seven-episode season is scheduled to debut on May 2 at 10PM ET, with two episodes airing that night. The series finale will air on June 6. The final season is set in 1994 and finds its characters facing the height of the HIV/AIDS epidemic. “This show changed my life,” star Rodriguez said on Instagram. “I love you all. It has been a pleasure, and it doesn’t stop here. The sky is the limit!”

André De Shields to Play King Lear Outdoors This Summer
Hadestown Tony winner André De Shields will take on the title role in the St. Louis Shakespeare Festival’s King Lear. The production marks the theater company’s return to live outdoor performance. Directed by Carl Cofield, associate artistic director of the Classical Theatre of Harlem, the show will play in Forest Park from June 2 through June 27. In addition to King Lear, the festival will also include a 24-stop tour of a 90-minute Othello. Six performers will star in the retelling, which will take place in public parks. Shakespeare in the Streets: The Ville will also offer three outdoor performances. Head here for more info.

Stars to Pay Tribute to Rebecca Luker with ALS Research Benefit
Laura Benanti, Michael Cerveris, Sierra Boggess, Norm Lewis, Kelli O’Hara and more Broadway stars are set to come together (remotely) for Becca, a night of sharing stories and songs celebrating the late Rebecca Luker, who died on December 23, 2020. Luker revealed in February 2020 that she had been diagnosed with amyotrophic lateral sclerosis (ALS), a progressive neurodegenerative disease. The tribute, which will take place on May 4 beginning at 7:30PM ET, is presented by Target ALS and will raise funds for ALS research. Get tickets here.

Mandy Patinkin to Star in The Good Fight Season Five

Stage and screen star Mandy Patinkin will join the cast of The Good Fight in its upcoming fifth season, according to Deadline. Patinkin, a Tony and Emmy winner, will appear in the Christine Baranski-led series as newcomer Hal Wackner, a layman with no legal training who spontaneously decides to open a court in the back of a copy shop. The Good Fight is Patinkin’s return to television after his acclaimed eight-season run in Homeland, for which he garnered four Emmy nominations. A premiere date for season five will be announced soon.

Broadway Records has announced the release of a mashup from Broadway couple Orfeh and Andy Karl as well as their friend Andrew Logan. The trio has combined the Star Is Born anthem “Shallow” with The Beatles’ “Yesterday” and Cyndi Lauper’s “Time After Time.” Kickstart your New Music Friday with the track right here!

P.S. Speaking of New Music Friday—Alanis Morissette has released her demo version of “Predator,” one of the new songs she added to Jagged Little Pill. Listen below!