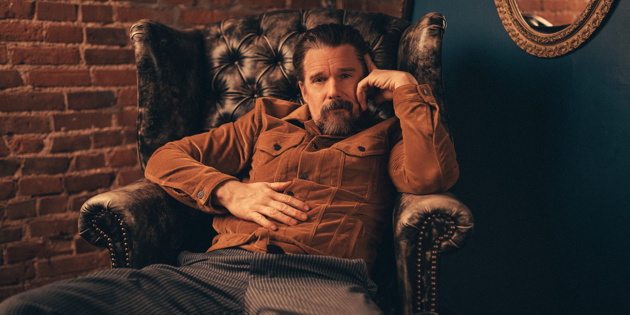 Oscar and Tony nominee Ethan Hawke, who was last seen on Broadway in the 2019 revival of Sam Shepard’s True West opposite Paul Dano, will release a new novel on February 2 from Penguin Random House. Entitled A Bright Ray of Darkness, the book tells the blistering story of a young man making his Broadway debut in Henry IV just as his marriage implodes. Hawke’s previous books include Rules for a Knight, The Hottest State and Ash Wednesday.

Everybody’s Talking About Jamie Film Gets Additional Song
Everybody’s Talking About Jamie songwriter Dan Gillespie Sells said “the movie spreads its wings musically a little bit.” According to London Theatre Direct, the big-screen adaptation of the Olivier-nominated musical will include a new song. Inspired by the 2011 documentary Jamie: Drag Queen at 16, the West-End-show-turned-movie follows the title character who, after receiving pushback when he announces he will wear a dress to prom, overcomes prejudice, beats the bullies and steps out of the darkness and into the spotlight. Fans are still waiting for a new theatrical release date. In the meantime, enjoy the splashy trailer below!

This casting is de-lovely! Felicity Kendal will make her musical debut in Anything Goes at the Barbican this summer with Gary Wilmot and the previously announced Megan Mullally and Robert Lindsay. This new production, which is now scheduled to begin performances on June 5, will be directed and choreographed by three-time Tony winner Kathleen Marshall, who directed and choreographed the Tony-winning 2011 revival on Broadway, starring Sutton Foster. The show is set to run through August 22.

Two-time Olivier Award winner Derek Jacobi is set to star alongside Dear Evan Hansen Olivier winner Sam Tutty and newcomer Emily Redpath in the previously announced film adaptation of Romeo & Juliet. He will play the Narrator. The production, which utilized groundbreaking technology to produce and film the show under COVID-19 restrictions and regulations, will be available to view here from February 13 to February 20. The production also features Grammy nominee Brandon Bassir as Mercutio. Check out the trailer below.