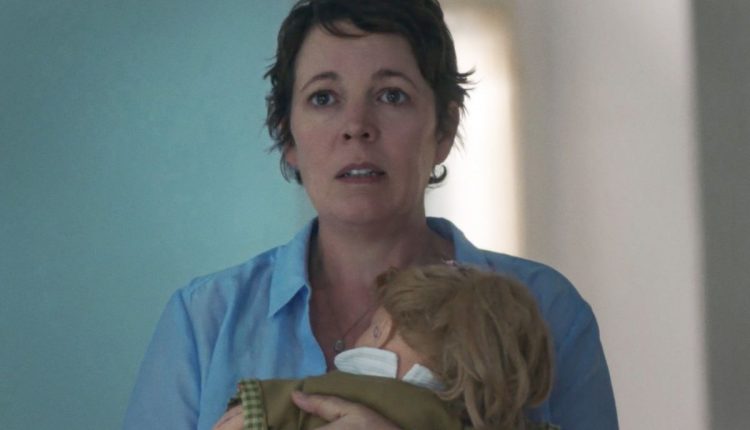 Parenting isn’t easy. People always say it changes your life, but it seems no one ever knows how much until they’ve had a child. Still, everyone dreams about being a parent at some point. To raise a child to have a good life is very rewarding but difficult. Indeed, not every parent gets to get it right. Despite their best intentions, mistakes are bound to get made. In The Lost Daughter, Olivia Colman’s character Leda knows first-hand that being a mother can be an overwhelming task. We learn in the film that she abandoned her family when motherhood became too much for her. Overwhelmed with the day-to-day responsibility, she left her family behind and took off. Her daughter’s care fell to her husband, who eventually divorced her.

The majority of the film follows Leda as she bonds with a young mother named Nina, who has a three-year-old daughter and is experiencing the same trials and tribulations. She’s married, just as Leda was, but is having an affair with another man. Leda tries to help Nina not make the same mistakes she did, but the results fail to have the desired effects. At the very least, the film ends with Leda having a chance to make things right again in her own life.

Nothing can prepare anyone for the role of being a parent, a fact that seems to get lost to many people who unwittingly take on the responsibility. But, as Leda’s story has shown, it’s not something one quickly escapes either. A parent’s actions and inactions are something that can haunt them forever. The following five films portray the darker side of being a parent.

The Wagners have never thought about having kids, but due to some familial competition, they begin looking into adoption. They take in a set of siblings: a 15 year-old teen, her 10 year-old brother, and their 6 year-old sister. The challenges of raising three kids are daunting, but the Wagners step up to the plate and give their all to providing the siblings a good life.

Of course, the Wagners aren’t the topic of discussion here. Adopting three kids is a brave thing to do. It’s a tall task, but they became heroes to the three children by the end of Instant Family. The children’s mother is a pivotal character that put this film on this list. Her drug addiction nearly led to other children’s demise in a burning house. She attempts to reconcile with her kids later in the film, but quickly relapses, leaving her oldest heartbroken as these siblings were about to return to her care. This is a harsh reality for many kids who go into foster care. Drug addiction is a serious issue. It was reported in 2019 that about 39% of children in foster care were removed from their parent’s care due to drug abuse. Thanks to foster parents like the Wagners, displaced children still have a chance to lead a semblance of a normal life.

Honey Boy is a biopic of sorts by film star Shia LaBeouf as it’s based on the events of his own life. The film follows an alcoholic actor named Otis, who struggles to reconcile with his abusive father through dreams and memories. LaBeouf played his own father, James, which may have been a therapeutic challenge for him. Sent to court-ordered rehab for drunken incidents, Otis is diagnosed with PTSD, something he denies profusely. His therapist advises he try exposure therapy to reconcile with his past. He flashes back to a childhood where he was in the grips of James’s turmoil while the two lived in a cheap motel.

James is seen as overly aggressive and constantly on edge due to his struggles with alcoholism. He lashes out at others, has a very hostile argument with Otis’s mother through the phone, which Otis is forced to relay both parents’ responses back to each other. James becomes jealous when Otis makes a friend and tosses said friend in a pool, violently threatening him. He is also seen sharing marijuana with his son at the movie’s end. His worse offense comes when he strikes his son for calling him out on his terrible behavior as a father. Who children are in adulthood tends to be shaped by their parents. An angry father is likely to shape an angry man later on, but this film shows that it is possible to move past that trauma.

Waves is an example of parents pushing their kids too hard. Tyler is a popular high school amateur wrestler from a well-off Black family, but his well-intentioned yet domineering father, Ronald, pushes him to be better. The pressure becomes such that Tyler hides a severe shoulder injury to compete, resulting in a tear that ends his wrestling career. Tyler’s life spirals even further after a fateful argument with his girlfriend that ends in her accidental death.

While Ronald only wanted the best for Tyler, he inadvertently streamlined the negativity that formed the basis of his rising tension with Tyler. It’s common in some families that parents put incredible amounts of pressure on their children to succeed. In the case of the high school sports stars, they sometimes carry the weight and responsibility of the parent’s approval and potential for success in their field. Their identities become about the sport so much that when everything is said and done, many are left with nothing afterward, assuming they don’t get sports scholarships. Waves is an example of the complexities of parenting, for when a parent does their best but pushes their children away in the process.

Denzel Washington stars as Troy, a father who supports his family in 1950’s Pittsburgh. Troy carries a lot of resentment toward the world. He feels he lost a chance to play in Major League Baseball due to his skin color. He works as a trash collector to put food on the table and worries for his mentally disabled brother while pocketing his insurance money to help support his family. Unfortunately, Troy has bottled this and other past grievances that are projected onto those closest to him, particularly his son Cory, who has a chance to go to college on a football scholarship.

Troy is a disgruntled father who, in the course of the time it takes to build a fence, ruins his relationship with everyone in his life because of his demons. He cheats on his wife of 18 years with a woman who makes him feel young again, he dashes Cory’s hopes of going to college to play football, and worse of all, he kicks his son out of the house after a physical altercation that Troy incited. Washington, who directed Fences, had stated that the themes are universal, believing that everyone can see a bit of themselves in the characters. Unfortunately, not every parent gets to get it right, and it’s not uncommon for some to lament the chances they could have had if things had been different for them. Unfortunately, sometimes demons get the better of people and drive wedges between them and those that matter most.

If marriage were easy, then everyone would do it. We see in Kramer vs. Kramer the toll that divorce and child custody cases can take on both parents. About half of all marriages end in divorce, but things can get even trickier when a child is involved. We see Dustin Hoffman play Ted, a father trying to raise his son alone after his wife Joanna (Meryl Streep) abandons them for over a year. It’s tough, but father and son make it through and adjust. When the mother returns seeking custody, the film follows the battle between mother and father as they fight over the boy in court.

While some things have changed in the legal system since this film’s initial release, the hard reality and themes of Kramer vs. Kramer are ever so common, which is what put it at the number one spot on this list. Plenty of children see the collapse of their parent’s marriage. No one ever wins in divorce, especially not in child custody cases. This film doesn’t depict the worse these matters can get, but it becomes clear to Ted that after the judge’s final verdict that things can get worse as he chooses to let his son go with his mother rather than put him in a position to have to choose between his parents.