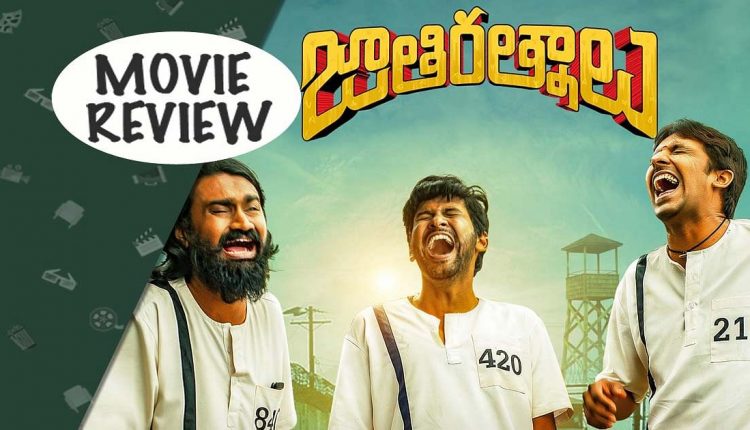 What’s Good: the randomness of it all. I don’t remember the last time I saw such a fulfilling no brainer comedy after Hindi film Dhamaal.

What’s Bad: the downwards slide in the second half, but a capable Naveen doesn’t let it touch the level it can’t be brought back to fun from.

Loo Break: you can pause this film anywhere, do your work, return; it will still be the same hilarious. The makers don’t want you to sit under any pressure, and that includes the natural one too.

Watch or Not?:  I would suggest you must go in for it. It is random, senseless but fulfilling at the same time. I know I am confusing you more, but bear with me.

Three friends, Srikanth (Naveen), Sekhar (Priyadarshi) & Ravi (Rahul) are jobless, hopeless and aimless 20 somethings, who have a bad reputation in their hometown Jogipet. Srikanth decides to move to Hyderabad to find a job in an MNC, as he is ashamed of taking over his father’s saree shop. Sekhar & Ravi join him. The three try to hatch a plan to live in a plush apartment, but end up being involved in a murder. What happens next is a laugh riot, and you cannot miss it.

Three years of professional film criticism, some odd over 100 reviews down, I am out of words to explain what I have experienced. Jathi Ratnalu is one of the most brainless, logic less and random but oddly satisfying comedies I have experienced in years. (Did I use those adjectives to appreciate a film? Yes!)

I am going to try and explain what I came out from the film with. Here are three hopeless men trying to figure out lives, but to no use. They aren’t depressed, but heroes of their own films. Anudeep KV, the writer-director of the film, manages to write them as the most useless (god, I have lost the count of times I wrote ‘less’) people but never judges them. He leaves that job to the villagers.

Everything is random, literally random. From job profiles, to clothes, to dialogues, to the twists, everything. I could literally see people improvising on sets and still managing to create hilarious scenarios every single time. The writing has punches at each dialogue. Not the forget Naveen Polishetty’s wrong English and atrocious slogans.

But what saves the day is how the team manages to balance this ‘raita’. While the comedy of errors maybe random and hilarious, not that Anudeep KV is not aiming anything with it. He is smart enough to make you laugh at your own situation. Unemployment, what it leads to, fake news, ministers unqualified, blind law system, class divide, all of this and not a single serious second.

For example, Srikant falls for Chitti and immediately the two romance over a song. For any other film this could have been the biggest turn off, but Anudeep does it smartly. He manages to break the stereotype, where in a normal world, they couldn’t have even spoken to each other. Similarly, in a room where a victorious party is deciding which ministers will take up what duties, one minister says “I know everything about current, give me Current Affairs Ministry to handle.” Oh my lordy lord!

Jathi Ratnalu is smart but random but hilarious yet balanced. Are you with me?

Not that there aren’t any flaws. The screenplay takes a dip in the second half and gets a bit repetitive, almost touching the funny TV soap category. But the makers manage to bring it back on track.

Agent Sai was when Naveen Polishetty made it clear that he isn’t here to play the stereotyped ‘hero’. He is okay with a woman leading him ahead. But with Jathi Ratnalu, he brings to the forefront his vulnerability. His ability to make fun of himself and making it look like he is unaware, which is so rare. He speaks in wrong English, makes the dumbest of the plans, approaches a girl & others with multiple names every single time, but never the correct one. He is brilliant.

Priyadarshi & Rahul Ramakrishna are the perfect Man Fridays Naveen’s Srikanth could get. Both the actors with their own set of dumbness elevate Polishetty’s act, in turn making the complete experience a riot, and one that will only churn out good.

I cannot believe Faria Abdullah chose Chitti to make her debut with. It is a risky path. A character so far away from logic that she suddenly becomes a lawyer and starts mouthing movie dialogues in a criminal proceeding (Khichdi’s Hansa has a sister finally). Faria is a treat, and I want to see what she chooses next.

Anudeep KV, if you ever happen to read this piece, I want to sit down and know how did you manage to streamline this inherent mess. The film is literally all over the place and still hooked for some reasons. As difficult it must have been to write and act, the biggest pressure seemed the direction. One wrong move and we could see the tower crashing.

The music is as crazy as one can expect. Ramajogayya Sastry’s lyrics in Chitti & is so in synch with the film, that it as well ends up making fun of itself.

All in all, there might be no logic in Jathi Ratnalu, but there is a satisfaction, a subtle message, the comedy of errors, and is worth every minute. Go in for Naveen Polishetty if not anything else, and he won’t make you regret. Also randomness reaches the peak when Mr. Reddy make a special appearance! If you are smart enough, you will know.

Share with us your experience of watching Jathi Ratnalu.

I Don’t Know If Superhero Movies Are for Me