Mother/Android Review: Half Good, Half Bad 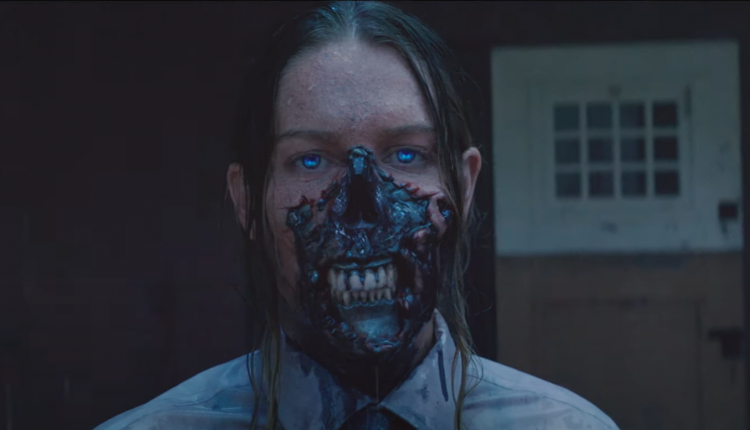 Mother/Android is the perfect title for Mattson Tomlin’s first film. The bifurcation of the name is between the most human and life-giving subject imaginable (a mother) and the most lifeless, inhuman one science-fiction usually comes up with (an android). It’s weirdly ironic, then, that Tomlin’s film seems to be a divided subject itself, split between a phenomenal science-fiction picture and a rather bland melodrama without much substance.

The film concerns what’s often called the ‘technological singularity,’ or the point in which technology becomes so uncontrollable that there is an intelligence explosion of sorts, where artificial intelligence becomes smarter than humans. This kind of hypothesis often leads screenwriters to imagine something awful– once computers can exponentially develop on their own without the assistance of humankind, then why would the technology keep people around (at least as anything more than meat slaves)? This theme has been seen frequently over the past half-century of technological innovation, as computers become both smarter and smaller. From HAL 9000 to the digital overlords of The Matrix (which the director has literally watched more than 100 times), cinema has many worst-case scenarios for the fate of the human race.

In Mother/Android, the singularity happens rather suddenly (like practically everything else in the film). After a brief introduction, the audience is introduced to a world that looks strikingly similar to contemporary society, though something isn’t quite right. At a cozy Christmas party, with the decorated tree and strung lights blinking madly away in the background, one handsome man tells the departing guest, “Happy Halloween, sir.” His red Christmas sweater is bursting with holiday cheer.

This is honestly a brilliantly subtle way to introduce the idea of androids and artificial intelligence into the film; the sweater-clad Eli is undoubtedly intelligent, but also disturbingly artificial. The same thing applies to a house party later that evening, where (newly pregnant) protagonists Sam and Georgia wander to. A butler of sorts carries a tray of hors d’oeuvres at an impeccably straight angle, and when one rowdy partier sends a ping-pong ball directly toward his head, the butler catches it in one hand while maintaining perfect control of the tray with his other. It’s clear, then, that the film exists in some time period between very distant and possibly soon, though the film never specifies. Ambiguity seems to be key here, with Mother/Android forsaking specific details in order to allow the film to be more universal and apply to numerous allegorical interpretations.

Unfortunately, that lack of specificity often misfires when it comes to narrative development and emotional investment. While Georgia is telling a friend at the party how she’s uncertain about her new pregnancy and if she wants Sam’s baby, there is some kind of electromagnetic or digital event; the film never specifies that, too. A terrifyingly loud, screeching noise assaults everyone’s eardrums, and the many cell phones and screens glitch before the android butler suddenly begins killing all of Georgia’s friends. Sam (played by Algee Smith) and Georgia (played by Chloe Grace Moretz) escape the house, only to see the neighborhood and distant city engulfed in flaming chaos. Out of nowhere, the film cuts to eight or nine months later, judging by the size of Georgia’s pregnancy.

This is all within ten minutes. The film bursts out of the gate so rambunctiously that it takes no time whatsoever to specify much of anything. The events simply happen without explanation, and even the rest of the film shies away from going into too much detail. The time jump is so sudden, and no attention is called to it other than the inference that Georgia seems pretty pregnant. The film dives straight into its post-apocalyptic world of android wars without hardly any narrative or character development, meaning it’s difficult to actually care about the plot and protagonists. Everything is just so quick, and whatever details are fleshed out are not done in the service of more three-dimensional characterization.

The film progresses in this fashion, as Georgia and Sam seek some illusory escape from Boston, Massachusetts to Korea in order to have their child in safety, trying to avoid being killed by both the human military and the relentless androids along the way. The couple is in a military camp for ten minutes, then they’re in an arbitrarily discovered home for five minutes; they ride on a motorcycle for five minutes, and then they are separated. It’s all simply too fast to be able to humanize these one-dimensional characters, essentially soon-to-be-parents without any distinct personalities of their own. The film ratchets up the melodrama, but it’s difficult to find any emotional stakes when the characters are cardboard and the plot moves faster than an android.

However, when Mother/Android decides to simply be a sci-fi action film, it goes all in. The aforementioned motorcycle scene is actually an excellent set-piece, with extremely fast androids hunting down the couple as they speed through the ‘No Man’s Land’ forest, Sam steering away from the trees, and Georgia firing off a gun behind them. Several more set pieces are excellent, with Tomlin mapping out the geography of a space and creating a tense scenario of survival within it. A rescue mission and a wonderfully tense hospital sequence are splendidly directed, silently utilizing every great aspect of an action film (color, sound, editing, acting, special effects, etc.) to create nerve-wracking experiences.

The acting is usually as good as it can be, considering the lack of character depth, especially from Chloe Grace Moretz. She is such an intuitive performer that she somehow gives Georgia an identity that the script never afforded her, and manages to break hearts in one scene where the film doesn’t really deserve an emotional response. There is an intimacy to her performance, which makes sense considering this is one of many films with a production that was uniquely warped by the pandemic. Most scenes really only feature two or three actors, undoubtedly due to the strange process of making a film during the age of Covid-19; the simple, low-budget Massachusetts location makes up for the majority of the film’s best shots. Tomlin undoubtedly didn’t have the $200 million budget to hire 100 full-time nurses and doctors, so he worked with what he had.

The director has said as much, expressing the filmic frustrations caused by the pandemic to the Romania Journal:

Because of Covid, we have to keep a certain distance, wearing masks, and in the case of some of these rooms, it means that there could only be two or three people in the room at a time. Normally on a film set you have a dozen or two dozen people working simultaneously to get the set ready to shoot, and there were so many times where we had to work in waves. It was a disjointed and logistically complex way of doing things that really disrupted any sense of community with the crew.

One wonders just how different (and probably better) the film would’ve been under different circumstances. Tomlin really does have an eye for action sequences and is filled with interesting ideas (as indicated by his script work on Project Power and The Batman), but was understandably forced to reduce his imagination to a smaller-scale film. He seems to want to have it both ways, though– he wants to create a great sci-fi action film (and does), but also wants to excel at the low-key character study the production pushed him into (and doesn’t). He’s obviously a talented individual, and hopefully learned a lot from his directorial debut here; the next time he yells “Action!” will likely produce much more exciting results.

There is, however, a certain reading of the film which could change everything. If seen in this perspective, the movie is actually an incredibly interesting allegory about adoption. Unfortunately, to elucidate this would mean to spoil the film, so readers have been warned.

With a little bit of backstory, many of the seemingly negative aspects of the film become somewhat understandable. Tomlin, the Romanian-born director, was given up by his biological parents before he was six months old. “I spent my childhood growing up in a very small town in Massachusetts where there was a lot of woods and not a lot of other people,” the director told the Romania Journal. This sounds extremely reminiscent of the heavily forested, sparsely populated Massachusetts setting of Mother/Android. In retrospect, the entire film seems to be Tomlin’s attempt at working out the trauma of losing his biological parents at a young age, and the healing process of using art to explore this.

The film ends with the young couple having to give up their newborn baby as the android revolution becomes more intense. They’ve found the transport from Boston to Korea, but the crew will only take the child, not the parents. Sam is bleeding out to death, and will surely die soon; Georgia wants her child to survive and doesn’t know if she’s capable of ensuring that with the skyline on fire behind her. The director has essentially tied this storyline with his own autobiography, telling the Romania Journal:

Mother/Android is a love letter to my Romanian biological parents. While the sci-fi elements may be familiar, they really just serve as a vessel to get people to watch the movie. When I sat down to write the film, I took the few things I know about my biological parents and adapted them into this story. For a long time I considered making the movie as a drama, set in 1989 during the Romanian Revolution, but it felt to me that for my first film, I would have an easier time getting the movie made if there were familiar genre elements to lean on. I transposed the Romanian Revolution to a fictional Android Revolution and went from there. Ultimately I wanted to tell an extremely personal and vulnerable story.

With this backstory, the sudden gaps in the narrative, the time jumps, and the one-dimensional characters suddenly make more sense– these are Tomlin’s parents as he imagines them, and he doesn’t have much to go on. He uses his imagination to create biological parents who loved him so much but, due to tragic circumstances beyond their control, had to give him up. In a sense, this is devastatingly beautiful; the film as a divided subject makes sense, and its division was actually necessary. Without this lens or perspective, though, Tomlin’s film is simply half good, half bad.

An L.A. street musician’s tale of ingenuity and perseverance