Michael Gross Takes Us to Shrieker Island in Tremors 7 [Exclusive] 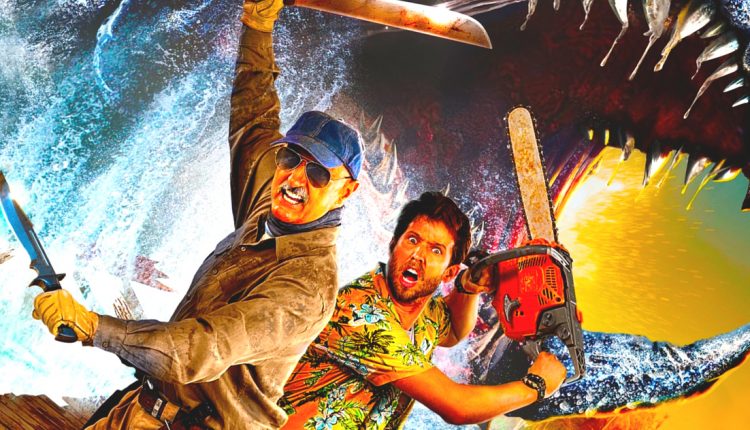 Survivalist and gun enthusiast Burt Gummer may have finally met his match. The iconic character played by Michael Gross has appeared in every single Tremors movie, and even a TV show. Now, he returns for his greatest challenge yet in Tremors: Shrieker Island, the seventh installment in the horror franchise that has been going strong since the original Tremors premiered in 1990 to critical raves, becoming a cult classic and one of the best monster movies of all time.

Times may change, but Burt Gummer doesn’t. He’s still neck deep in graboid guts as he sets out for an all new adventure this Halloween. Tremors: Shrieker Island drops exclusively on Digital, Blu-rayTM, DVD and On Demand starting October 20, 2020. And then it will go to Netflix at a later date. To celebrate what is one of the few new movies coming our way for Spooky Season, we caught up with genre icon Michael Gross to find out if this really is Burt Gummer’s last rodeo.

The verdict on that may be out. But Tremors 7 tells a different story. Heading into what some may consider spoiler territory, Michael Gross is happy to talk about Burt Gummer’s ultimate fate and whether or not this reallyl is the end of the road for the mighty worm buster. A fan-favorite since his turn as patriarch Steven Keaton on Family Ties in the ’80s, Michael Gross gleefully dives into the carnage awaiting fans in Tremors: Shrieker Island during his exclusive chat with Paulington James Christensen III.

Will there be more Tremors movies? Will we see the return of Steven Keaton in a Family Ties revival? Is a Young Burt Gummer movie on the table? And should we really vote for Burt in the upcoming 2020 election? All of these questions and more are tackled with the kind of free spirited, fun loving demeanor only Michael Gross can bring to a conversation.

When a group of wealthy trophy hunters genetically modify Graboid eggs to create the ultimate hunting experience, it isn’t long before their prey escapes the conﬁnes of their small island and begin terrorizing the inhabitants of a nearby island research facility. The head of the research facility and her second-in-command Jimmy (Jon Heder) locate the one man who is an expert in killing Graboids: the one and only, and now reluctant, Burt Gummer (Michael Gross). Once on board, Burt leads the group in an all-out war against the larger, faster, and terrifyingly intelligent Graboids and the swiftly multiplying Shriekers!

The mighty Shriekers are back. more terrifying and deadlier than ever in Tremors: Shrieker Island, the newest chapter of the long-running, fan-favorite Tremors franchise, premiering exclusively on Digital, Blu-rayTM, DVD and On Demand on October 20, 2020 and streaming soon on Netflix from Universal 1440 Entertainment, the original content production arm of Universal Pictures Home Entertainment. Everyone’s favorite Graboid hunter, Michael Gross (Family Ties, Suits) reprises his iconic role as Burt Gummer along with Jon Heder (Napoleon Dynamite, Blades of Glory) as Burt’s potential protégé in this all-new thrilling and hilarious movie that brings wild new adventures and terrors to the team against the backdrop of a small island in the Tropics filled with magnificent beaches, crystal blue water and lush forests.

Fully loaded with epic monster attacks, quick-witted humor and outrageous antics, Tremors: Shrieker Island on Blu-rayTM, DVD and Digital makes its debut timed to the 30th anniversary of the original film and comes packed with exclusive bonus features including a collection of top 30 movie moments showcasing footage from all seven films, a breakdown of the various species of Tremors monsters, and a special tribute to Michael Gross from Kevin Bacon, Jamie Kennedy, Ariana Richards and several past and present cast and crew, taking fans deeper into the renowned franchise and legendary world of Tremors.

Celebrate 30 years of the horror-comedy franchise with Tremors 7-Movie Collection, available on DVD on October 20, 2020. For the first time ever, new and longtime fans can experience the excitement and adventure of all seven movies in one must-own set including, Tremors, Tremors 2: Aftershocks, Tremors 3: Back to Perfection, Tremors: The Legend Begins, Tremors 5: Bloodlines, Tremors: A Cold Day in Hell, and the newest film Tremors: Shrieker Island.