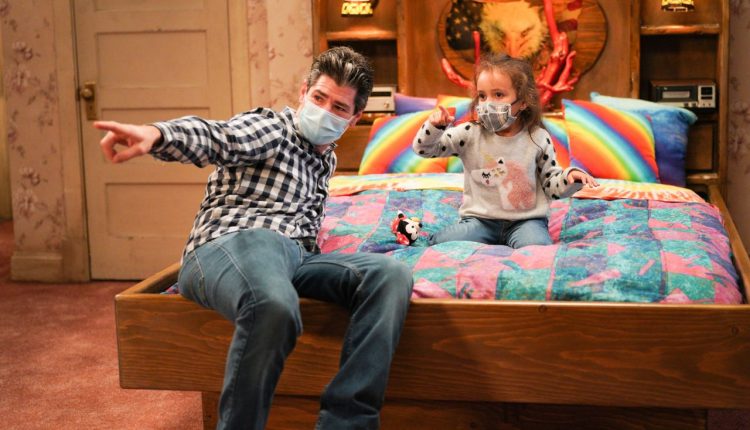 Michael Fishman has played the character of DJ Conner since Roseanne first premiered. We had a lovely conversation about The Conners and his new role as a director on the show. We also discussed what it is like to work with John Goodman.

In the midst of the interview, Michael talked about what it was like to reprise a role after 20 years and about his new role as a Director on The Conners.

Rick Bentsen: What’s it like to reprise a character after twenty years?

Michael Fishman: Well, you know it’s interesting. I think the general thing when you come back to a character after such a long period, which is what people are experiencing now as we do these remakes, there’s this nostalgic kind of stepping through the time warp feeling that is very surreal, especially when you get a very similar set or the exact set as in our case. And you walk into it and this place you left twenty years ago is brought back to life and your stepping in it and everything is right back and you’re in these same relationships again. I think that’s such a unique experience.

But mine, I think, is a little different from almost everybody else. And the reason I say that is, particularly on our show, I was a kid when we left. I was fifteen. And so, my life is so radically different, and my character’s life is so radically different, that it’s really about studying where he was and who he was, and then trying to decide who he would be now and what you would want him to be.

In my case, all the other characters were fleshed out and had clearly defined relationships. And DJ. We got to meet him in a whole new place. We got to meet him as an adult. And we got to meet him after having served in the military, and this whole process of his life. And having a child. And being in all these dynamic relationships. You know, he’s in an interracial marriage and he has a biracial child. He’s a veteran that’s trying to get back to civilian life. His spouse is currently deployed and is in the military. So all of that as a framework and a backdrop is such a rich combination, but it requires me to really know. Because we initially talked about PTSD and we talked about him going to see a therapist, so there are times where he was a little frustrated or a little short or a little angry. Or there were times that I had to really draw on his old kind of humor and that kind of that playful spirit and that heart. So trying to find the two is a really complex thing, and we’ve done a really good job.

And some of the pieces that have actually been cut and didn’t make it on air highlighted that more, but it’s a really great opportunity as an actor because we work on a show where we don’t just do comedy, we do really heavy, real dramatic topics as well.

Related: Exclusive: Michael Fishman Opens Up About Using Charity To Lift Others

So, between the two shows, Rosanne and I had worked together quite a bit and we had had conversations about where we thought he would be. When we came back, Bruce Helford and her came up and they took an idea that she and I had talked about previously. You know, there was an episode called “White Men Can’t Kiss” where DJ didn’t want to kiss a girl in the school play because she was black, which was the framework of how that was phrased back then. I believe it was in 94. It was a huge episode. It was a very socially aware episode. And so what happened was, we jumped forward and that ended up being the woman he married. The girl he didn’t want to kiss ends up being this woman he falls in love with and this woman he starts his life with. And they both go in the military which is pretty common for lower-middle-class families, particularly in the Midwest. So it’s a very honest portrayal of that.

And we’ve done flashes of when his wife has come back and the impact on their relationship. But also being in an interracial marriage adds elements that I hope we’re going to cover more. I mean, it’s something we’ve talked about a lot, and we’ve talked about it in bits and pieces. We did a scene where a woman thinks his daughter is adopted because we don’t particularly look a lot alike. And I actually have adopted kids and it’s something that happens to us. You know, people kinda want to know or want to understand and they kinda put their own preconceived notions or assumptions on it. And it really changes the way you interact sometimes as a family because it impacts you in such a way… You know, my kids are my kids, and the truth is, I don’t know why it matters to other people. The kids are loved, which is really all that should matter. They’re cared for and they’re loved but other people kinda want to understand the framework of that so to show that in a very authentic way on television was very important and I think was a very powerful part of an episode. And I’m hoping we’re going to explore that more.

RB: So, you are taking on a new role on The Conners, directing multiple episodes. Can you tell me more about that?

MF: So I started directing last year on The Conners. I have some experience elsewhere. You know I’ve worked in most departments over the years. Between my acting stints, I went behind the scenes. So it’s a beautiful gift to have some awareness from different departments.

Last year, I directed our Halloween episode. It was a huge responsibility. It was a beautiful gift they gave me. The first time trusting me, they gave me what is usually our most complex technical episode, because it’s all the regular elements plus costumes and makeup and pranks and special effects. So it was a beautiful gift. And a real challenge, but it was fantastic because I was up to the challenge. And I love Halloween and I love our history with that so I was gifted to kind of carry our legacy episode. Outside of our live episodes, it’s absolutely kind of the most complex thing we do. And it’s the thing that the show is known for.

And then this year, I’m doing four episodes, which is a giant leap. And it’s been an incredible process. I just finished my third one this week, yesterday. And every one of them has come with its own kind of craziness. We’ve had a lot of stuff in production this year. We’ve kind of jumped around a little bit. We’ve had actor availability stuff. You know, with COVID there are always hesitations, or scheduling stuff can be an issue because you have to wait to make sure people have had enough days between where they worked last and where they work here and all that kind of stuff. So we’ve really had to bounce around.

Related: The Conners Set Furniture And Memorabilia To Be Auctioned For Habitat For Humanity

RB: I’m sure COVID has been causing all kinds of mayhem.

MF: So it’s interesting. As an actor, you’re in Zone A, so you’re not usually in contact with as many people, right? Because that’s one of the ways they protect the set. But as the director, I gotta be connected to every department and especially going back and forth between the two.

This week, for example, was the second time I directed where I was in the episode. During the Halloween episode last year was a huge role for me because DJ essentially wasn’t around as much because he was working, and his sisters decided that his daughter should stay with them for a while. So this heart-wrenching story of you’re kinda losing your child for a little while to keep everything together. Here I am directing, but I’m also carrying this huge massive storyline that is so impactful and heartfelt. It was a great opportunity. I actually love directing and acting at the same time. It gives my right and my left brain something to talk about that’s healthy.

Just before this interview, Michael finished directing episode 409 “Three Exes, Role Playing and a Waterbed” which will air on 1/5/2022.

ABOUT THE EPISODE: “Andrew Leeds plays a special role in Darlene’s (Sara Gilbert) storyline as Nick, a former stockbroker who traded his drug habit and career for a simpler life. Now working in a Zen bookstore in Lanford, Nick is the new guy in Darlene’s life as he becomes the first man she’s dated since breaking up with Ben (Jay R. Ferguson). Becky helps Dan redesign his bedroom, while Jackie and Neville try to spice up their relationship.”

Trouble in Mind’s Michael Zegen on How The Marvelous Mrs. Maisel Is Like Theater | Srtalent