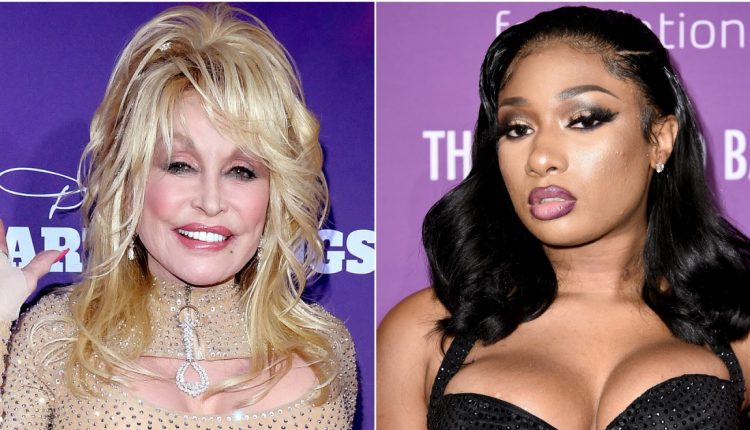 After sponsoring everyone’s shot girl summer by funding a COVID-19 vaccine, Dolly Parton just had a hot girl summer moment of her own. And Megan Thee Stallion agrees.

In honor of her husband’s birthday, the legendary country queen recently re-created her 1978 Playboy magazine cover, which pictured Parton in the Playboy bunny costume and a bedazzled bowtie.

“It’s always #HotGirlSummer for my husband, Carl,” Parton captioned a Tuesday video of herself rocking the classic Playboy bodysuit and bunny ears 40-plus years later. “Happy birthday my love!”

The video, which has already racked up more than 5.4 million views on Twitter alone, even earned Parton a shout-out from Megan Thee Stallion, who coined “hot girl summer” in 2019. After seeing Parton’s post, the Grammy-winning rapper shared it on Twitter and lovingly dubbed the “Jolene” hitmaker “hot girl dolly.”

“You’re probably wondering why I’m dressed like this,” Parton says in the clip. “Remember some time back, I said I was going to pose on Playboy magazine when I was 75?

“Well, I’m 75 and they don’t have a magazine anymore, but my husband always loved the original cover of Playboy, so I was trying to think of something to do to make him happy. He still thinks I’m a hot chick after 57 years, and I’m not gonna to try to talk him out of that. … What do you think?”

As a gift to her longtime partner, Carl Thomas Dean, the Grammy winner staged a photo shoot “in this little outfit” reimagining her Playboy cover-girl moment — sparkly pink cufflinks and all — and had it framed alongside the 1978 version. (Here’s what Parton looked like on the original Playboy cover.)

“I was kind of a little butterball in that one. Well, I’m string cheese now, but he’ll probably think I’m cream cheese, I hope,” she said with a wink.

“Anyway, I’m going to surprise him — going in singing to him in my little bunny suit. So, what do you think? You think Playboy oughta pay me for at least the photo shoot? I do.”

Also on her hot girl game this summer is Megan Thee Stallion — who achieved a milestone this week as “thee first rapper” on the cover of the 2021 Swimsuit Edition of Sports Illustrated.