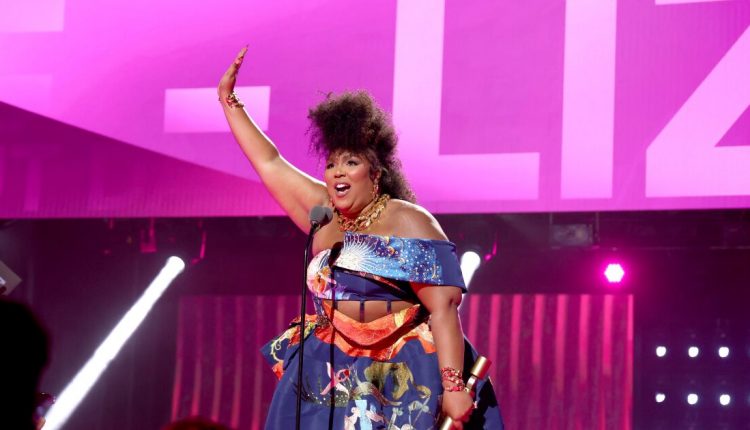 Lizzo is beyond ready to be loved and she’s spreading that love around.

The “To Be Loved” and “About Damn Time” singer-songwriter was the People’s Champion award winner at Tuesday’s People’s Choice Awards, an honor recognizing the triple-threat entertainer‘s impact on music and television, as well as her commitment to championing diversity and inclusion.

However, instead of accepting the award herself, she presented 17 activists who she believed were more deserving of the recognition. One of them was Tamika Palmer, the mother of Breonna Taylor, the 2020 shooting victim who died during a police drug raid on her home.

Lizzo was given a heartfelt introduction by her mother Shari Johnson-Jefferson who said her 34-year-old daughter “has shown us all that we don’t have to conform to anyone’s standards in order to be happy, to be creative and to feel worthy. I know that Lizzo has literally saved lives. No one is more deserving of this honor.”

Then, clad in a bold Alexander McQueen gown, the now-seasoned Grammy and Emmy Award winner took the stage to flip the script on the acceptance-speech playbook and bring attention to the women activists fighting for Indigenous, transgender, religious and cultural equity, among other causes.

“When I first heard about this award, I was on the fence about whether I should accept. Because if I’m the People’s Champ I don’t need a trophy championing people, you know what I’m saying?” Lizzo said upon taking the stage at the Barker Hangar in Santa Monica.

“I’m here tonight because to be an icon isn’t about how long you’ve had your platform. Being an icon is what you do with that platform. And ever since the beginning of my career, I’ve used my platform to amplify marginalized voices. So tonight, I am sharing this honor. Make some noise for the people, y’all,” she added, presenting a procession of activists who she believes “deserve the spotlight” and demanded that the people “give them their flowers.”

Here they are and what Lizzo had to say about them:

Amariyanna Copeny, also known as Little Miss Flint: A 15-year-old “who spent the past eight years fighting to ensure everyone in Flint [Mich.,] and in communities across the nation has access to safe drinking water.”

Shirley Raines: “Through her organization Beauty 2 the Streetz she makes the human connection with the unhoused people of Los Angeles and makes them feel loved and love what they see in the mirror.”

Yasmine Aker: An actor who’s also “an Iranian American grassroots activist. She is a voice for the voiceless and works with various organization supporting the Iranian women and the people’s fight for freedom.”

Emiliana Guereca: “If you’ve been to a Women’s March, she’s probably behind it. As the founder of the Women’s March Foundation, she helps amplify our voices.”

Esther Young Lim: “She’s the author of the booklet ‘How to Report a Hate Crime’ and seeks to eradicate barriers and empower the Asian American and Pacific Islander community.”

Felicia “Fe” Montes: The poet is “a Chicana Indigenous artist and activist, co-founder of the groundbreaking women’s collective Mujeres de Maiz. She has created a safe platform for Indigenous women of color to express themselves.”

Jayla Rose Sullivan: “A professionally trained dancer who is making sure there is space for transgender and nonbinary performers in the dance community. Watch out for that big girl!” (Sullivan is a burlesque dancer who competed in the musician’s Emmy-winning reality competition series, “Lizzo’s Watch Out for the Big Grrrls.”)

Kara Roselle Smith: Smith is a member of the Chappaquiddick Wampanoag Tribe. “She works tirelessly to seek justice for Black and Indigenous communities and is fighting for Land Back and reparations.”

Maggie Mireles: “Her sister Eva Mireles was a teacher and a hero who lost her life protecting her students during the school shooting in Uvalde, Texas. Maggie is continuing her fight against senseless and despicable gun violence that has become far too common,” Lizzo said through tears and with her voice cracking. “Make some noise.”

Amelia Bonow: The co-founder of Shout Your Abortion, which “is working to normalize abortion, increase awareness of abortion pills and motivate people to work and support abortion access in their communities.”

Odilia Romero: “An advocate and translator for the Indigenous peoples from Mexico and Central America who are now living in the United States. Her woman-led organization CIELO brings daily relief to her community in Los Angeles.”

Rabbi Tarlan Rabizadeh: The director of student life at UCLA and VP of Jewish engagement at American Jewish University is “committed to building a bridge between Jewish people of all colors and backgrounds and, as an Iranian American, she is fighting to amplify the plight of the Iranian people.”

Sahar Pirzada: The Heart to Grow activist is “working on behalf of Muslim women in America to advance reproductive justice and protect the community from gendered violence and oppressive systems.”

Chandi Moore: The HIV and trans rights activist is also a community health educator at Children’s Hospital Los Angeles who gives “trans and gender-nonconforming youth the tools they need to live their lives as their authentic selves.”

Crystal Echo Hawk: Hawk is a member of the Pawnee nation of Oklahoma who “seeks to amplify Native voices through her organization IllumiNative. She disrupts the invisibility of Native peoples here in America.”

Reshma Saujani: The author and CEO of Girls Who Code is also “advocating for the moms. As a founder of the Marshall Plan for Moms, she fights for paid family leave, affordable childcare and equal pay for all.”

Tamika Palmer: “She fights in honor of the memory of her daughter, Breonna Taylor — Say her name! — who was killed in an act of police violence. The Breonna Taylor Foundation has and will continue to focus on pursuing justice for Breonna.”

“Give them their flowers,” Lizzo concluded, adding, “power will always be to the people!”

Comedian Kenan Thompson hosted the 2022 People’s Choice Awards. “Lizzo’s Watch Out for the Big Grrrls” was also up for an award, and the musician was also nominated in the female artist, album and social celebrity categories. Her hit song “About Damn Time” earned the ceremony’s prize for the song of 2022.

Sarah Herron of ‘The Bachelor’ shares death of newborn child

How are Todd and Julie Chrisley doing in prison? ‘OK’