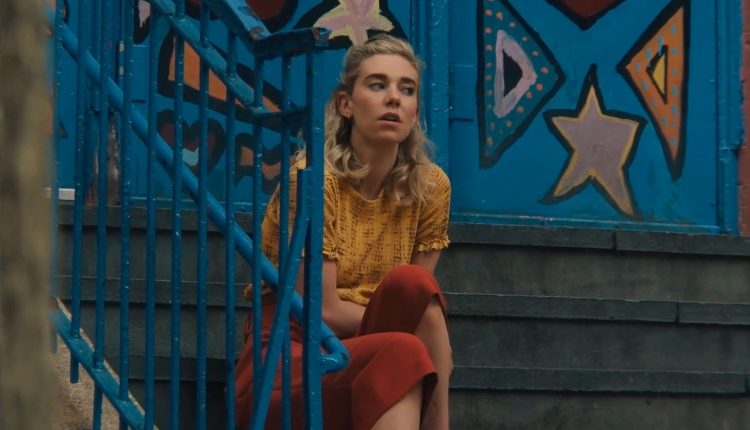 Italian Studies follows an amnesiac British woman as she wanders through a vibrant New York City on the Fourth of July. The film is shot in a New Wave style without a structured narrative. A cacophony of urban sounds, stream of conscious imagery, and fractured dialogue ebbs and flows like a lucid dream. Italian Studies has some merit as an art-house experience but feels superficial. The fantastical nature of the character’s journey isn’t interesting or compelling.

Italian Studies opens in London with a woman (Vanessa Kirby) attending a music function with her husband (David Ajala). The protagonist bums a cigarette from a young attendee (Annika Wahlsten) outside the venue. She is stunned that the woman does not recognize her or remember Simon. The film then cuts to a bustling New York City summer day with the protagonist walking her dog. She enters a hardware store to browse before becoming strangely disoriented. The woman hurries away in a confused state. Leaving her barking dog behind.

She walks aimlessly through the city streets. Taking in the bustling atmosphere with a wide-eyed countenance. We then see her oddly interviewing and hanging out with a group of eclectic teenagers. She encounters Simon (Simon Bricker), a talkative high schooler, at a famed hot dog shop in Chelsea. The protagonist latches unto him as an anchor in her rambling. She soon discovers her name but continues to suffer from memory loss during their time together.

The listless nature of the film gets old quickly. The hodgepodge editing, especially the interview vignettes of the Gen Z hipsters, are yawn-inducing. The slice of life character interactions is supposed to be raw and original. They end up looking staged and insincere. I had a hard time believing the relationship dynamics between Simon and the protagonist. An adult woman palling around with an underage teen shouldn’t have been accepted so easily by his peer group.

Being homeless in New York City isn’t an exciting adventure. Italian Studies does show the protagonist fleetingly dealing with hunger and shelter issues. This is done in an off-hand manner like checking a box. Granted this is art house fiction. But a vulnerable, attractive woman meandering Gotham’s streets is extraordinarily dangerous. I just couldn’t accept that the film’s premise didn’t address this stark truth. Indigent women have to be constantly wary of their surroundings, who approaches them, and where they go. My willing suspension of belief could not accept the protagonist going along blindly with Simon.

Vanessa Kirby is a talented actress. Her solo scenes dealing with human problems are the best parts of the film. Everything else is an avante-garde exercise that just doesn’t work. Italian Studies is a production of Animal Kingdom, Topic Studios, and Tango Entertainment. It will have a concurrent theatrical and on-demand release on January 14th from Magnolia Pictures.

The Batman Oreo Promotion Reveals New Images of The Batcave

The Batman is still over six weeks away, but a new Oreo promotion has given a new look at the redesigned Batcave.

Here Are 4 Philosophical Films and Why They’re Brilliant