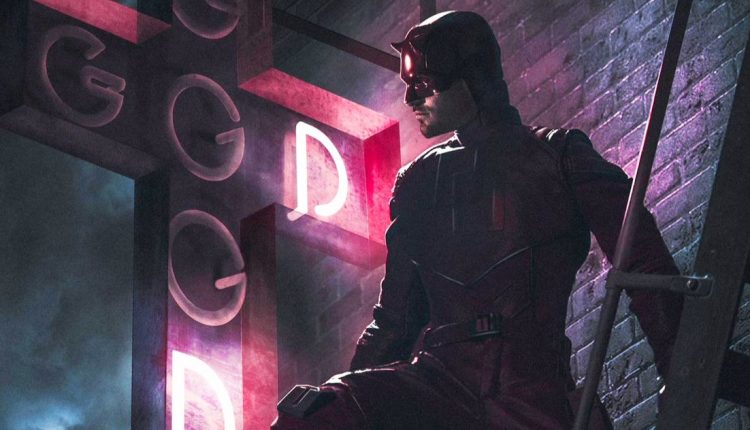 An atmospheric new piece of fan art has Charlie Cox’s Daredevil returning to the Marvel Cinematic Universe on Disney+. While there have been no announcements thus far regarding The Man Without Fear’s debut on the popular streaming platform since the Netflix show was cancelled, fans cannot help but hope that Marvel’s Daredevil will once again be brought back into the fray.

” And apologies for intruding again, but to show my appreciation for ‘Daredevil’ I made this concept poster for a new season on Disney+! I really hope we can have it soon, hopefully with you at the helm again for a ‘born again’ Matt Murdock!”

RELATED: Jennifer Garner Wishes Elektra Had Been a Part of Kevin Feige’s MCU

The poser, by visual artist Nuno Sarnadas, sees Charlie Cox return to the Marvel role that he played so well across three seasons of Daredevil. Standing heroically atop one of Hell’s Kitchens’ many, many seedy looking alleyways, the poster reminds us of the Marvel vigilante’s religious background, with a neon-lit cross showing simply the two letter ‘d’s’. In fact, while the suit looks very similar to what Cox wore in the Netflix series, Daredevil’s symbol, which is simply ‘DD’, has been added the comic faithful ensemble.

Finally, Avengers tower can be seen in the background, teasing the potential of audiences one day seeing Daredevil fight alongside the MCU’s mightiest heroes. Of course, Tony Stark did move the Avengers’ headquarters upstate at the end of at the end of Avengers: Age of Ultron, but just forget about being pedantic for now and enjoy this stunning artwork.

Fans and talent alike were shocked when the streaming giant cancelled all of their Marvel series, including Daredevil, Luke Cage, and Iron Fist in late 2018, before axing the likes of Jessica Jones and The Punisher the following year. Many had hoped that this would result in their immediate revival on the newly emerging Disney+, but while the rights to the characters have now reverted to Marvel, nothing has yet been confirmed that would suggest these versions of the characters will ever be revived.

Marvel Studios President Kevin Feige is gradually being worn down however, and recently provided the most promising update yet. “Everything is on the board,” Feige said of their plans for Daredevil and the rest of The Defenders. “That’s one of the fun things about the comics is that characters would appear and disappear and come and go. All of it is inspiration for the future. There are some great characters and actors from those shows.” Regarding the return of Charlie Cox to the Daredevil role, Feige has responded somewhat vaguely to the idea with an enticing “we’ll see.”

As for Cox himself, he has stated previously that he won’t be holding his breath when it comes to suiting up again as The Man Without Fear, though he would relish the chance to do so. “Look, I had a great time,” he said. “I’m so grateful I got to play that character as long as I did. Of course, I’d love to keep going. I’d love to be involved with it.”

Rumors persist that Charlie Cox will return as either Matt Murdock, Daredevil, or both in the upcoming Marvel sequel Spider-Man: No Way Home, with reports even claiming that he had filmed for a short while on the project. Should he fail to appear in Spider-Man: No Way Home in some capacity, there will be ample opportunity for Daredevil to make a comeback, as Disney+ has several projects in the pipeline including She-Hulk, Loki, Hawkeye, Moon Knight, and Secret Invasion. This comes to us courtesy of Nuno Sarnadas’ official Twitter account.

Find Out About Off-Broadway’s Blindness on Broadway Profiles | Srtalent