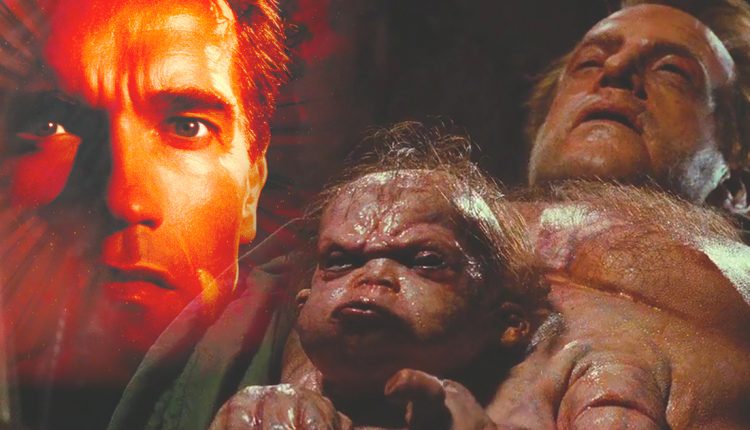 Kuato and his human host George are one of the most iconic duos of the 90s. Even people who have never seen Total Recall are aware of their cult status. Marshall Bell brought both Kuato and George to life in director Paul Verhoeven’s seminal 1990 sci-fi cult classic, which is celebrating its 30th Anniversary this year. To celebrate, we caught up with the iconic character actor to look back at Kuato and George’s legacy in pop culture.

On December 8, Lionsgate is releasing Total Recall on 4K Ultra HD Blu-ray for the first time ever. The package is loaded down with plenty of special features, and even director Paul Verhoeven was wowed when he first saw the high-definition treatment given to his film. “It’s absolutely wonderful,” the filmmaker said of the restoration, “There is so much detail you could say it is three dimensional. Bravo!”

While Arnold Schwarzenegger is the star of the show, Marshall Bell proved to be a true scene stealer, first introduced as George who later reveals his mutant conjoined twin brother Kuato hiding under his shirt. Bell plays both parts thanks to jaw-dropping special effects spearheaded by Rob Bottin. Speaking with Bell on the eve of the 4K Blu-ray release, he lets us in on quite a few behind-the-scenes secrets, what it was like to embody Kuato, and the audition process that landed him this very unique part.

Marshall Bell is an accomplished character actor with several blockbuster hits on his hands. He is known for stealing scenes in a number of true classic and cult favorites, a laundry list that also includes Stand By Me, Birdy, A Nightmare on Elm Street 2: Freddy’s Revenge, Twins, Dick Tracy, Natural Born Killers and Starship Troopers. But that is just scratching at the surface of his long and illustrious career which continues today.

The Total Recall 4K Ultra HD Blu-ray release contains an audio commentary that pairs Arnold Schwarzenegger and director Paul Verhoeven talking about Kuato, George and Marshall Bell’s performance at length. Marshall Bell himself hasn’t gotten a chance to check it out just yet, but he does believe this is a perfect stocking stuffer for just about anyone this holiday season. There are plenty of special features included that delve into the behind-the-scenes magic that brought the movie to life, and Bell’s roll in that longstanding legacy.

Marshall Bell even tackles one of the biggest and most controversial questions surrounding Total Recall. Did it really happen? Or is this just a vacation? The actor gives his thoughts on the 2012 remake starring Colin Farrell and even opens up a little bit about Stand by Me and his role in popular culture.

Total Recall fans can check out George and Kuato in all their 4K glory when the restored sci-fi classic goes on sale starting this Tuesday at all fine online retailers and stores nationwide.

A Thrilling DC Comics Sequel That Overcomes Its Flaws

What To Do (Without Broadway!): A Day-to-Day Schedule | Srtalent