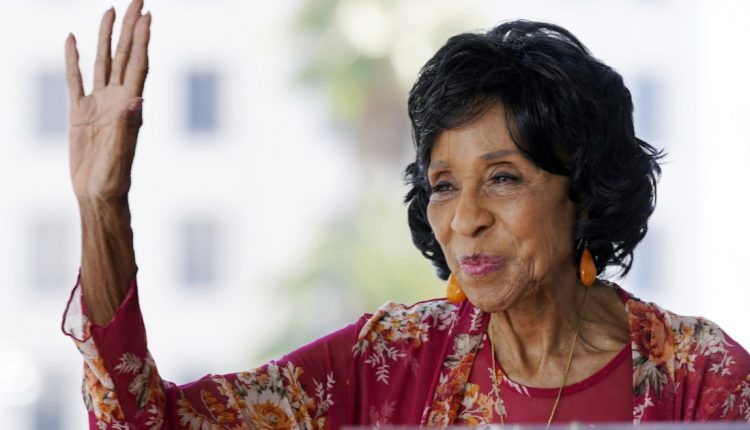 Marla Gibbs, who played maid Florence Johnston on “The Jeffersons,” gave fans a scare Tuesday when she closed her eyes and stopped talking during her Walk of Fame star ceremony in Hollywood — but never fear, it was only the excitement.

A Gibbs representative told Entertainment Weekly that the five-time Emmy nominee, who is 90, was “doing great” after the ceremony. Even though Tuesday’s event was held early in the day, Hollywood was still in the upper 80s at the time. The Times reached out to a Gibbs rep for details but didn’t get an immediate reply.

“I never thought it would happen, but here it is,” Gibbs told KABC after the ceremony, brushing off a suggestion that the heat had made her swoon. “I just got overwhelmed for a minute. I haven’t been excited until this moment!”

During the ceremony, about 20 minutes after getting woozy, Gibbs was back on the Walk of Fame red carpet, sitting for pictures and once again flashing the brilliant smile she’d had while Norman Lear, actor Tisha Campbell and L.A. City Councilman Mitch O’Farrell were singing her praises to the crowd.

Gibbs, a trailblazer who executive produced and starred in the late-’80s sitcom “227,” was dubbed “our Betty White” by Campbell, who cited her as an inspiration.

“There is only one you, ma’am, and I am thrilled to be here for you. Love you,” legendary producer Lear told Gibbs after describing her delivering a signature laugh line from their days with “The Jeffersons,” which he created along with Don Nicholl and Michael Ross. “You have added time to my life, and for that I could not be more grateful.”

Gibbs reminisced about the last time she was on Hollywood Boulevard when she celebrated a star for Isabel Sanford, who played Louise Jefferson on the sitcom from 1975 to 1985. That was in January 2004, just months before Sanford’s passing. Sherman Hemsley, who played George Jefferson, died in 2012.

The prolific actress — she recently made an appearance in the Disney+ comedy “Big Shot,” starring John Stamos — also thanked Lear, saying, “It’s only because of you that they know me.”

Gibbs said all the right things and thanked all the right people, then seemed to stall, closing her eyes and taking a moment. Others, including her children, rushed to her aid — mostly offering water and a helping hand to stay upright — until she was able to take a seat behind the lectern.

While some people were telling her to call it a day, Gibbs soon rallied, posing for photos with Lear and others.

Gibbs’ legacy goes beyond television. She was one of the first Black celebrities to invest in the Crenshaw district, years before Magic Johnson received far more acclaim for developing a multiplex theater in the nearby Baldwin Hills Crenshaw Plaza. Before that, she had sunk cash into her jazz club, Marla’s Memory Lane.

For most of the 1990s, she owned a 1,000-seat theater in the Crenshaw district, the Vision Theater Complex, and when it closed in 1997 she was heartbroken, telling The Times back then, “I had a vision and I just wasn’t able to complete it. This is a sore, an open sore.”

The performer had hoped Vision Theater Complex would become something like Harlem’s Apollo Theater for Los Angeles, but it was not to be. She said she was hurt by the local community failing to support the theater, in which she’d invested millions. Also in the early 1990s, she spoke out about negative portrayals of minorities in the media.

Back on Hollywood Boulevard on Tuesday, the presenters’ memories of Gibbs were strong. “So many stars can be bought, but this one was earned,” said Campbell. Meanwhile, Lear described her as “this glorious woman, this glorious performer, this glorious comedienne.”