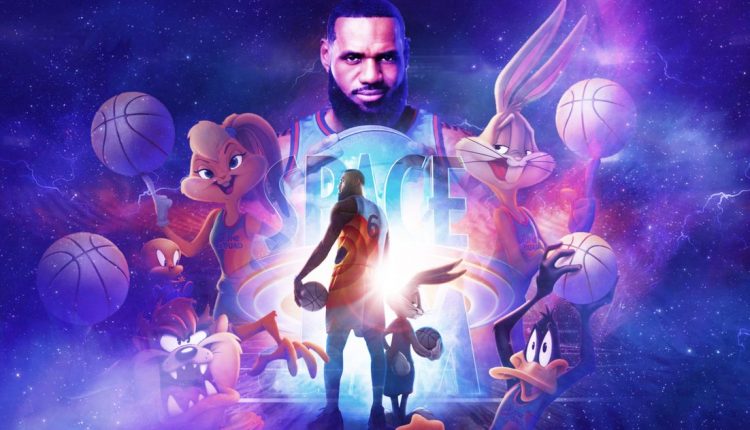 LeBron James flies high in a clever sequel that will delight generations of Looney Tunes fans. Space Jam: A New Legacy has the basketball superstar battling an aggrieved artificial intelligence for the affection of his son. The father and son coming to terms storyline is admittedly hokey; but the hilarious toons, supporting characters, and slick direction add up to a family entertainment slam dunk. Warner Bros. does go overboard with rampant self promotion. The film is essentially a two hour commercial for the studio and its intellectual property.

Space Jam: A New Legacy flashes back to LeBron James as the poor kid (Alex Huerta) of a struggling single mother. He gets a used Nintendo Gameboy from a friend. The distraction causes him to lose focus and the team suffers as a result. He’s chastised by his coach. Who calls him an incredible talent, but will never lift his family out of poverty if he doesn’t commit every ounce of himself to being great.

In present day Los Angeles, LeBron’s youngest son, Dom (Cedric Joe), is constantly pressured by his father. He wants to be a video game programmer, but LeBron doesn’t think he’s living up to his potential. Lebron, Dom, and a family friend, Malik (Khris Davis), journey to the Warner Bros. lot to meet with studio executives (Sarah Silverman, Steven Yueng). Their “server-verse” algorithm, drumroll please…Al G Rhythm (Don Cheadle), has crafted “Warner 3000”, an all-encompassing social media and marketing strategy using Lebron’s likeness. When LeBron scoffs at the idea, the evil AI digitally kidnaps him and his son. LeBron is forced to play a basketball game against a new “Goon Squad” to rescue Dom and escape the “server-verse”.

Space Jam: A New Legacy takes a little time to get going. The first fifteen minutes are somewhat slow to establish exposition. The film then takes off like a comedy rocket. LeBron’s adventures in the “server-verse” are quite humorous. LeBron and Bugs Bunny (Jeff Bergman) explore other Warner Bros. worlds to recruit the dispersed Looney Tunes gang. Their hijinks in The Matrix, Metropolis, and Harry Potter had the audience in my theater rolling with laughter. These scenes are smartly done with the zany reactions of the various toons. Granny nearly steals the show with several knockdown funny moments.

Director Malcolm D. Lee (The Best Man, Girls Trip) gives the supporting ensemble cast ample screen time. They add comedic value and help LeBron to carry the acting weight of the film. Don Cheadle is a fantastic villain with a lot of personality. He gets several wicked barbs against LeBron, his fame, and place in NBA history. Other basketball greats (Anthony Davis, Damian Lillard, Diana Taurasi) also join in to mercilessly mock LeBron. LeBron knows his critics and lets the film take potshots. This was a pleasant surprise. An egomaniac like Michael Jordan would never have allowed such ribbing in the first Space Jam film.

Space Jam: A New Legacy brings back classic Looney Tunes characters to glory. It was great seeing Bugs Bunny, Daffy Duck, Elmer Fudd, Yosemite Sam, Tweety, Sylvester, Marvin the Martian, and all of my childhood favorites again. They are just as funny and endearing with a 21st century CGI upgrade. Space Jam: A New Legacy is produced by Warner Animation Group, Proximity Media, and the Springhill Company. It will be released July 16th theatrically by Warner Bros. and stream concurrently on HBO Max.

“In Many Ways, It’ll Be Bigger & Bolder”